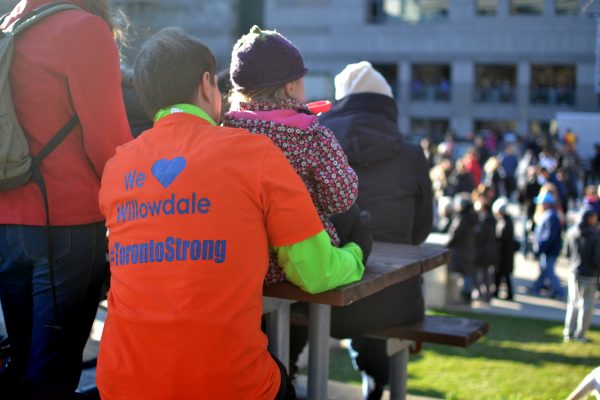 There’s a lot of talk these days — on Spacing and elsewhere — about “messy urbanism.” But if you want to understand what this evocatively gritty phrase truly means, leave the coolster worlds of Parkdale or Dundas West or Leslieville and venture to the stretch of Yonge that Alek Minassian (allegedly) turned into a killing field last week.

In the days since that terrible crime, the media has been filled with reporting about the area’s remarkable diversity and its evidently deep sense of community, expressed first in dozens of moving stories of pedestrians looking out for one another in the midst of a rampage no one on that day could have ever imagined and, then, on Sunday, with the massive gathering at Mel Lastman Square.

Now think about this point: a ribbon of concrete, that most commonplace of urban objects, toggling from quotidian public space to blood-splattered crime scene to the tableau upon which countless acts of kindness and bonding have played out.

Why were all those people on the sidewalk in the first place? In light of what happened — and how this city processes the implications of what transpired there — the question seems worth exploring.

Mel Lastman has surfaced in the past week mostly in reference to the civic plaza that bears his name. But his determinative role in this story is critically important. From the earliest days of his stint as North York’s mayor, Lastman dreamed of turning that suburban stretch into a bone fide city centre – a program that consumed him from the moment back in the late 1970s when the federal government plunked down that weirdly angled red brick pile of a building just north of Sheppard.

From then on, Lastman — who grew up in Kensington Market and brought a zany urban sensibility to his politics — hustled and wheedled and bullied developers, power-brokers, and hucksters into transforming north Yonge into a city centre with all the fixings: public buildings, office towers, cultural venues, three subway stops and even squares where you can pause to eat a sandwich and watch the world go by.

There was, and still is, a cheerful on-the-fly-ishness about North York City Centre. The planning is haphazard and provisional, with gigantic, graceless towers plopped next to two-storey retail strips that somehow dodged the bullet of land assembly. At a certain point in the 1990s, the gold-rush up there was so out of control that the city had to install physical barriers between Yonge and the leafy Willowdale side streets because the homeowners were so terrified by traffic infiltration.

It has often felt like an urban hub cobbled together with wire, string and duct tape, plus copious applications of greed and ambition. But what Lastman always intuitively understood is that density gathered around a main street (as opposed to a mall) would eventually add up to something important, something urban. What’s more, he unquestionably had a sense of place, and knew why public space mattered.

The finery of urban design — that would come later. Lastman’s North York wasn’t built in a day.

Leaving aside the easy explanations about nice weather, etc., the people on the sidewalk on that lunch hour last week were there specifically because Lastman pushed so much residential and employment density onto what had been barely a main street until the mid-1970s.

It is also important to say that the vast majority of suburban hubs, both here and elsewhere, do not look or function like North York city centre. It has all the automotive scale of the post-war suburbs, and yet somehow came to emulate the crowded jumble of a downtown downtown — a precinct where people will walk because (and here’s the key part) there’s somewhere to walk to, and do so on sidewalks that are much wider than the parsimonious strips meted out to so much of the older city.

No one knows why the accused man chose this particular piece of Toronto to carry out his revenge fantasies, or what precisely weaponized him. But in a deeply perverse and tragic way, his actions have served to remind us that sidewalks matter, and why there is no more urbanizing act than walking on the city’s streets.

This crime also starkly reinforces a lesson that too many municipal politicians have stubbornly resisted, which is that automobiles can become deadly weapons, either through carelessness or intentionality.

I should hasten to point out that I do not want to draw any sort of moral equivalence between last week’s rampage and the daily (and increasing) litany of pedestrian fatalities in this city, except to note (for the gazillionth time) the extreme vulnerability of the human body when confronted by a rapidly moving vehicle.

Yet both sorts of tragedies demand the City’s attention. In the case of last week’s events, the wrong solution – though one that’s been considered more frequently in cities that have faced similar vehicle-based attacks – is to ring-fence sidewalks with bollards, concrete barriers or other types of civic armour.

Such security barriers, to my eye, can be seen as inadvertent monuments to a perpetrator. Rather than memorializing the murderer, I’d argue for doubling-down on the heartfelt public response that surfaced in the wake of his killing spree, and to commemorate that outpouring by expanding the public sphere.

In fact, if there was ever a more appropriate moment to approve Transform Yonge, which council deferred in late March amidst some election year yodelling about traffic congestion, this is it: after all, the one thing that everyone (and not just the denizens of Willowdale) now gets is that north Yonge has evolved into a people place teeming with just the sort of street life that makes cities so much more than utilitarian agglomerations of buildings and roads.

At the same time, we could take this opportunity to remember that five times as many pedestrians have died on Toronto streets so far this year as were killed on Yonge Street last Monday. That, too, is a crime, albeit a very different sort, but nevertheless one that also cries out for a far more determined response than half-hearted bromides about pedestrian safety and a few extra traffic calming signs.

If there’s a single point of commonality between Monday’s crime and the spike in pedestrian deaths, it is this: that Toronto’s steadily climbing density has filled the city’s sidewalks with ever larger volumes of ordinary people going about their daily business.