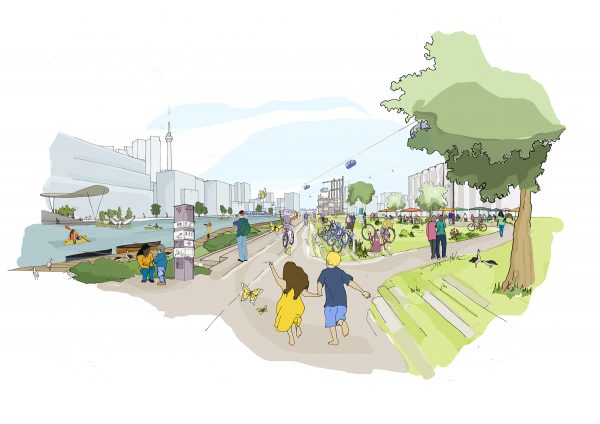 In a striking move that marks a clear change in the relationship between Waterfront Toronto (WT) and Sidewalk Labs, officials with the tri-level agency this morning approved a new and more restrictive agreement  with the Alphabet/Google subsidiary, and also made public the original deal between the two parties — a 29-page contract that had been kept mostly secret and generated months of controversy and criticism for both sides.

The new contract, known as “a plan development agreement” (PDA), lays out the terms of the relationship, and effectively establishes a framework for the eventual master innovation and development plan (MIDP) for Quayside — a document that likely won’t be completed and made public until next year, at the earliest, and will ultimately be subject to approval by WT’s board.

The 58-page PDA appears to have been negotiated in the weeks since the WT board parted ways with former CEO Will Fleissig, a San Francisco planner who succeeded John Campbell over two years ago and was considered the architect of the Sidewalk relationship. The contract imposes clearer restrictions and conditions on the arrangement with Sidewalk Labs, which is a three-year-old urban technology start-up headed by former Bloomberg CEO and New York deputy mayor Dan Doctoroff.

WT’s release today also marks a noticeable change in tone in the characterization of Sidewalk Labs. Under Fleissig, the fledging company was often glowingly referred to as a partner in a joint venture, with Doctoroff prominent in the communications and public relations messaging.

Today’s release contains none of that flattery. More importantly, WT officials seem to have gone out of their way to highlight the ambiguity and problematic terms of the original framework agreement. The documents released earlier this afternoon to journalists under embargo include a detailed side-by-side comparison between the PDA and the original contract — a document that clearly indicates just how lopsided the latter was.

In an interview with Spacing, WT officials stressed that the new PDA “reinforces the public interest” and provides the agency with the resources to continue not only developing the waterfront but also deploying emerging energy and sustainability technologies that had been envisioned early on by Bay Street financier Robert Fung, who chaired the 1999 taskforce that recommended the establishment of a waterfront development corporation. “We can use this as an opportunity to demonstrate how to get to the next step,” said Michael Nobrega, acting CEO and a long-time executive with OMERS’ investment arm.

Under the original deal, Sidewalk Labs had the option to purchase or secure WT real estate. The framework agreement also gave WT a “royalty free” license over some of the intellectual property created by the Sidewalk Labs project.

The new agreement says there will be no land transfers, and that WT will have opportunities to share in the revenues and profits generated by the technology developed through this project. Because Sidewalk Labs has been so explicit about its intention to roll out the technologies developed in Toronto to other cities and regions, the latter provision marks a significant shift in the commercial relationship, and provides a return on the investment to WT’s three government shareholders.

Another intriguing revelation involves the treatment of the US $50 million that Sidewalk Labs offered up as a fund for pilot projects. Company officials frequently said that the money came without strings attached, but the framework deal indicates that Sidewalk Labs considered it to be equity. The new contract makes it clear that the $50 million “does not constitute payment toward land.” Added Nobrega, “We have no obligation to pay it back.” The new contract also specifies just how those funds will be spent, and includes a provision for Sidewalk Labs to reimburse WT for some of its administrative costs.

Perhaps most significantly, the PDA includes much more precise and detailed language about privacy and data protection than did the original agreement, which was mostly silent on these points besides a stagey promise by Sidewalk Labs to retain Anne Cavoukian, Ontario’s former information and privacy commissioner, to oversee its practices.

According to WT, the new contract “provides a set of Digital Governance Framework Principles (Schedule I) outlining the values that will underpin the design and development of the MIDP. These principles speak to how digital innovations will protect personal privacy and civil liberties while providing shared benefits. The principles also set out the establishment of the Digital Strategy Advisory Panel, a group of subject-matter experts to help advise on the safe and ethical use of new technologies.”

One of these is the deployment of technologies such as sensors that can detect cell phones and push advertising to the owners. While these sorts of systems are deployed in malls, many observers have fretted about whether pedestrians who move through public spaces in Quayside will be detected in some way.

“If such technology is envisioned [for Quayside], it will not be allowed except in strict compliance with Canadian privacy laws and Canadian values,” said Chantal Bernier, Denton’s privacy and cyber-security practice leader and WT’s privacy counsel.

Finally, the re-jigged arrangement offers somewhat more clarity to the scope of Sidewalk Lab’s work. In the original request for proposals document and then Sidewalk Labs’s 196-page winning bid, it’s clear that the Port Lands, dubbed the “eastern waterfront,” was being bundled in the Quayside deal, or at least served up as a next step. Sidewalk Labs, moreover, had been granted the status of “master developer,” meaning it could manage all the projects within these zones.

The master developer language has been purged from the new arrangement, and Sidewalk Labs has been told that this agreement pertains only to the 12-acre Quayside site, although WT’s chief development officer Meg Davis points out that both sides leave open the possibility that someday the technologies developed at Quayside could be extended to other parts of the waterfront.

The only new condition on Waterfront Toronto is that it doesn’t negotiate a competing agreement with another consortium while the New York firm is still in the picture, Davis said. “There are no rights given to Sidewalk.”