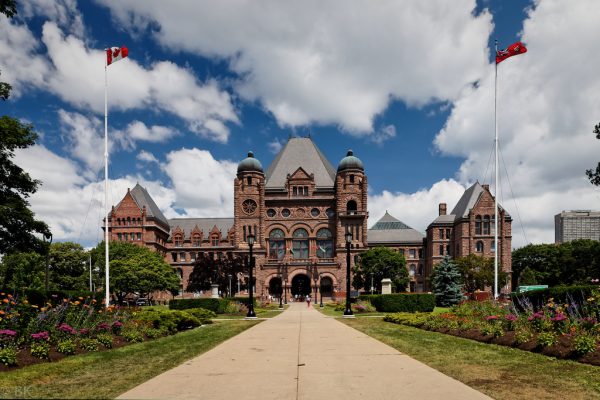 Given the thin broth that was the Tories’ election platform, it’s hardly surprising that Premier Doug Ford’s first month in office has had the feeling of a twister zigging and zagging violently across a mid-western prairie.

Yes, he’s delivered some version of the highlight items on the platform (killing both cap-and-trade and the Liberals’ sex-ed curricula) with varying degrees of thoroughness (buck-a-beer). But in the main, the agenda feels chaotic — a witches’ brew of score-settling (with the City of Toronto, the teachers’ unions, the press, etc.) coupled with an evident lust for headlines.

How else to explain the last week?

One of the orthodoxies of political management for governments with majorities is that they front load their agendas with all the most un-savoury policy moves and then spend the rest of the term re-building their political capital. Shock and awe, following by the necessary pay offs to appease wobbly constituencies.

Maybe, this is precisely the narrative Ford & Co. will follow.

Or maybe not. Perhaps these recent headline-grabbing digressions – the snitch line or the alleged edict to purge climate change references – are all mere improvisation, 21 cabinet ministers in search of a plot (with apologies to Luigi Pirandello).

What’s missing in all this bluster is a clear sense of what, exactly, the government plans to do with its time in office and its stewardship of our taxes.

To find out, I FOI’d the mandate letters for the two ministries with most say over matters urban – municipal affairs and housing and transportation. I want to know what Ford has in mind for the subway upload, rent control, the Greenbelt, Metrolinx, the City of Toronto Act, etc.

A letter (below) arrived last week indicating that the requests had been denied and citing Section 12(1) of the Freedom of Information and Protection of Privacy Act, which essentially keeps cabinet records, advice and discussions confidential. 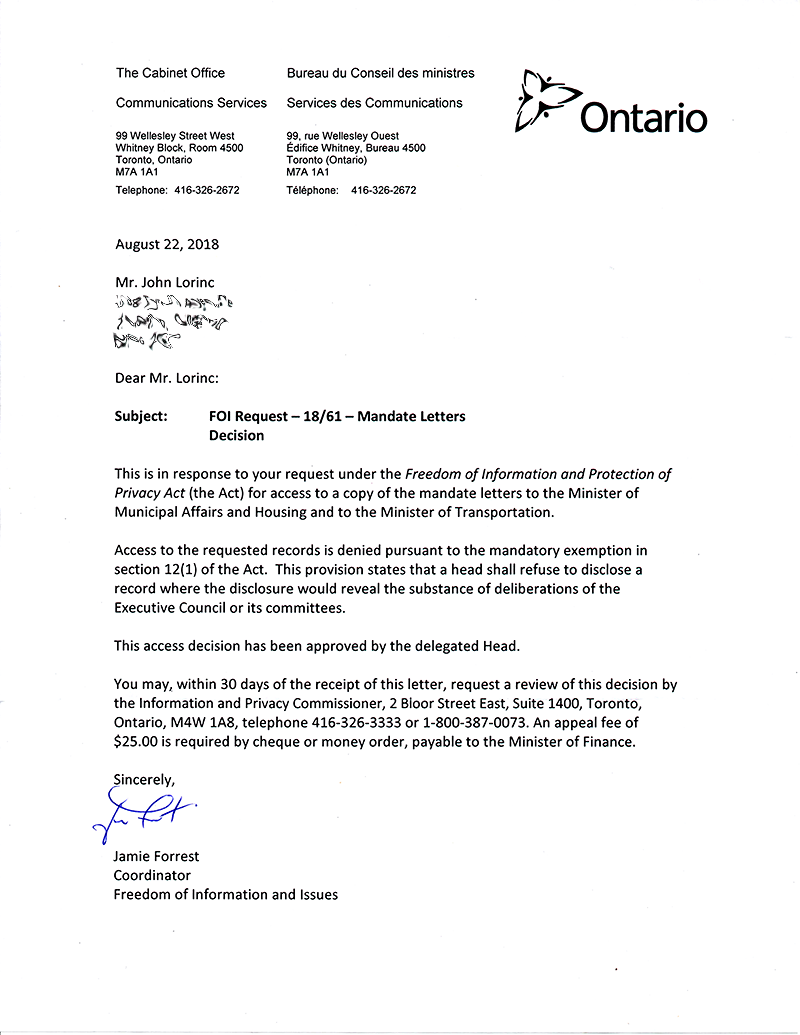 Oddly enough, the letter came from one Jamie Forrest, a Cabinet Office “freedom of information and issues coordinator” who also happens to be the official named on the snitch line web form.

I can’t say I’m surprised, but I would like to take the opportunity to offer up a few facts about mandate letters, which are essentially the marching orders delivered by the prime minister or the premier to the line ministries.

It’s debatable whether mandate letters are the product of cabinet deliberation; they are more an expression of the intent of the head of government and his or her advisors. For decades, they were kept under lock and key – evidence, as University of New Brunswick political scientist Donald Savoie once noted, of growing executive centralization in Canadian parliamentary democracy.

A 2016 essay on prime ministerial power observed that mandate letters are not only meant to provide specific direction for ministers; they also give deputy ministers the authority to bring a minister back in line if they begin to wander.

In what felt like a big gain for democracy transparency, two high profile governments in recent years moved to break the tradition of secrecy around mandate letters. Both Justin Trudeau and Kathleen Wynne made their ministers’ mandate letters public, and did so at the beginning of their terms in office.

Others have followed: Newfoundland and Labrador premier Dwight Ball took this step in 2015. Nova Scotia’s Liberal premier Stephen McNeil published his government’s mandate letters in 2017. B.C.’s NDP premier John Horgan followed suit the same year. Nor is it just a practice on the centre-left, as Manitoba’s Tory premier Brian Pallister demonstrated in 2016 after defeating the NDP.

Interestingly, Alberta NDP premier Rachel Notley bought herself some grief for for failing to release her own government’s mandate letters, a practice adopted as early as 2008 by Progressive Conservative premier Ed Stelmach, who may well have been one of the earliest Canadian political leaders to adopt this kind of transparency. (Some Alberta ministries did publish their mandate letters.)

As further evidence that the practice of making public mandate letters is not considered a partisan gesture, consider the fact that when Trudeau shuffled his cabinet this summer, he neglected to issue updated or new mandate letters, including to newcomers to cabinet, like Bill Blair. As The Hill Times noted, two Conservative Party critics, Peter MacKay and Gerry Ritz, pounced on that omission.

Point is, Ford’s Tories look increasingly out of step – or out of touch – with an indisputably healthy development in Canadian democracy. After all, it’s entirely appropriate that the party in power disclose its plans so the people who pay the bills can make informed decisions at the voting booth come the next election cycle.

The Ford regime’s disinclination to release those mandate letters suggests the platform rhetoric about accountability is, appropriately enough, mere labeling.

Spacing will appeal the Cabinet office’s August 22 decision to withhold the two documents to the Information and Privacy Commissioner of Ontario.