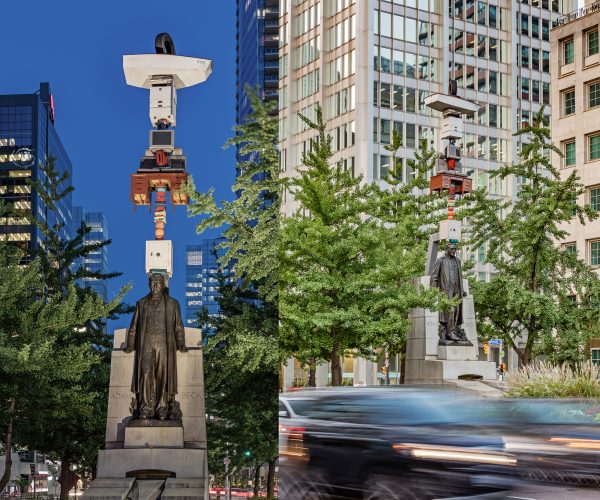 If you’ve found yourself in downtown Toronto recently, you may have noticed a change to the Adam Beck Memorial, at Queen and University. Constructed in 1934 to commemorate Sir Adam Beck— the man responsible for bringing public hydroelectric power to Ontario—the memorial has undergone something of a transformation. Atop Beck’s head is a stack of domestic and everyday objects, including basketballs, books, a television, a photocopier, and even a tire.

This tower of household paraphernalia is the work of Japanese artist Tatzu Nishi, who has entitled this temporary installation, “Life’s Little Worries of Sir Adam Beck”.

Nishi has erected a number of art installations in which he introduces the domestic world into that of the monumental. In his piece “Discovering Columbus,” for example, Nishi constructed a sitting room around a statue of Columbus in New York’s Columbus Circle. He has applied this concept in his work to a statue of Queen Victoria in Liverpool as well as a sculpture of Christ in Germany.

These interventions serve as a means of re-contextualizing monuments, removing them from positions as static, constant overseers and placing them in settings of domesticity. While these pieces do not necessarily render the monuments more familiar or relatable (the effect seems to be more playful and jarring than it is familiarizing), they do help to deconstruct the aura of permanence and immutability that enshroud monumental structures.

By placing these statues in temporary environments, the context-dependent meaning of monuments (and artworks more generally) is revealed, demonstrating that the interpretation of a piece is not unchanging but at least partially based on its physical and temporal setting. 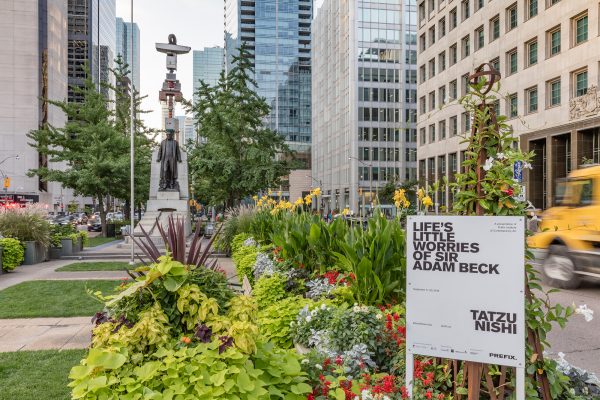 “Life’s Little Worries” adopts a different approach from Nishi’s previous works. There is not the same interplay between public and private life that one may have found in some of Nishi’s other installations. “Discovering Columbus” provided viewers with the experience of interacting with a public monument in a private room. However, in “Life’s Little Worries,” the intervention of stacking familiar, everyday objects onto the original figure’s head does not transport the monument into a domestic setting. Rather, it is this odd tower of private objects that is brought into the public sphere.

Yet bringing these quotidian items into public view is not the most significant aspect of this piece. The objects exhibited are not particularly personal. Items like desks, filing cabinets and rowboats do not suggest the same sort of intimacy as, say, underwear, beds or birth control pills. Exhibiting the latter items in a public setting would be more jarring and provocative.

In this case, what is really significant is that, in their presentation, the domestic articles in “Life’s Little Worries” gain a prominence usually reserved for monumental figures like Beck.

Presenting daily objects as having ‘monumental’ importance raises questions about what we deem to be significant in both our personal and collective histories. Perhaps there is not such a big gulf separating the ‘little worries’ and ‘little objects’ of our day-to-day lives from the giants of history. History in many ways consists of the daily lives of private individuals, and the daily lives of private individuals are likewise constituted and influenced by the legacy of historical figures like Beck.

Nishi’s piece, then, brings to the fore the fluidity between the private and public sphere, and, in so doing, disassembles the constructed binary that separates the two.

This conversation was facilitated via a translator

SPACING: In your artistic interventions, you often play with the contrast between public versus private, permanence versus impermanence and intimacy versus distance. How do you think your work can shift our perceptions of monuments and other features of the city that we take to be static and immovable? 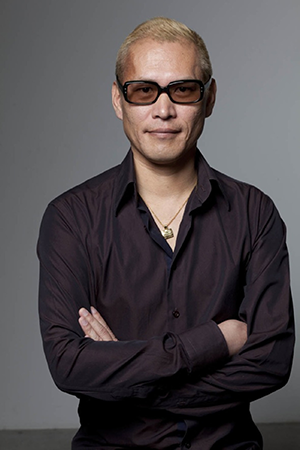 Adam Beck is fondly remembered for bringing publicly-owned hydro-electricity to Ontario. How did Beck’s legacy influence your conception for this work?

Usually, when I start on what kind of monument to work with, I do not start looking at what he [the person who is memorialized] did. The research started with a four-day walk around of the city, going to look at public monuments, and the Adam Beck monument had the biggest impression on me. At that point I didn’t know what he did or who he was, but this process is always the same for other public works. For example, I did “Discovering Columbus” in New York, and I wasn’t thinking of Columbus in the beginning, we just went around the city and then we just happened to get the most inspiration out of that sculptor in New York City and that’s why I chose it.

You have done this “Life’s Little Worries” piece before. Do the domestic objects you use change from monument to monument, or is it the same throughout? If it does change, why do you make those choices?

It’s always different objects. The first “Little Worries” series I did [was] with myself. Back then I had some worries in my life, and I just wanted to take stuff that related to my worries and prop them up on my head. This time it’s obviously different, so I came to Toronto and then looked around the city, and anything that sort of interested me or inspired me I used to represent Toronto. What I wanted to do was sort of make the history of Toronto or Ontario into a piece of art.

Can you give me an example of why you chose certain pieces and how they represent Toronto?

For example, I found there was a huge university in Toronto (the University of Toronto), so I chose a stack of books and chairs. When I was walking on Dundas Square, there were lots of monitors around the square, and someone told me there were lots of TV stations in Toronto, so that inspired me to put a TV there. And I heard that people like ice hockey here, so a helmet from the Toronto Maples Leafs is also a part of it. Ontario also has some car manufacturing industries, so that inspired me to have one big tire on the work.

While you have recently, and most famously, focused on re-contextualizing monuments, you have also performed similar artistic interventions on other pieces of art, such as “Sometimes extraordinary, sometimes less than common,” in which you take Picasso’s “Woman in Blue Shawl” and place her in a rather drab kitchen. You’ve also done a similar intervention with street lamps, large city clocks, etc. What is the difference between re-contextualizing these different pieces and re-contextualizing a monument?

As you mentioned, there are many works with the street lamp, and to me for those street lamps, they are the same as the public monuments. Public monuments are always created to commemorate some famous figure or some great person, and when they make it, they make a big celebration and reception so that everyone knows about it. But then, because public monuments stay in the same space for a really, really long time, people just start forgetting what is there… The streetlamps are similar. There are many street lamps throughout a city and they light up at night, but people don’t pay attention to them. So with both the public monument and the street lamps, people are probably looking at them, but not paying attention to them.

Nishi photo by Sachiko Horasawa; other images by Toni Hafkenscheid, courtesy of Prefix

Tatzu Nishi’s “Adam Beck’s Life’s Little Worries” will be up until September 30th. Be sure to also catch it at Nuit Blanche.

Sarah Ratzlaff is a recent graduate from the University of Toronto with an interest in the philosophy of art and public spaces. Follow her on twitter @ratzlaff_sarah