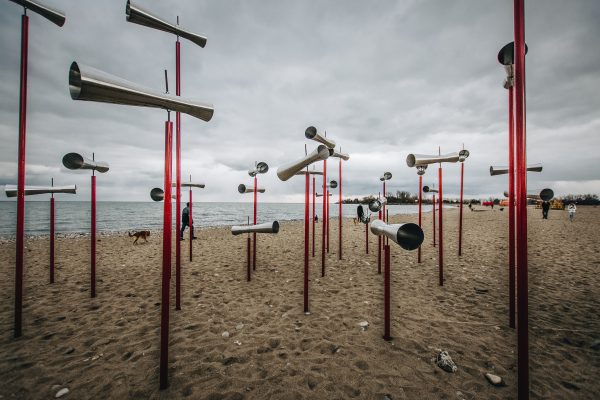 Works of public art are markers of what a society deems to be important, and the choices we make about what works to erect attest to the shared values and histories. Not only does public art reflect our shared outlooks, but it also serves as a means of shaping those points of view. Every time a work of public art is erected, no matter how abstract, its presence in the public sphere acts as a symbol and extension of the public itself.

This is why public art often generates controversy, with the most recent debate in Toronto circling around Christian Giroux and Daniel Young’s Three Points Where Two Lines Meet. The controversy hinged on what role public art should play in our society, and provoked the age-old-question: who gets to decide what’s good art?

While both John Tory and Jennifer Keesmaat have committed to doubling the Culture Build Investment Fund from $330,000 to $660,000, pumping more money into public art is not enough. Toronto’s public art landscape has been lacking a comprehensive vision and purpose. In order to revitalize public art, then, practical initiatives need to be paired with ideological shifts in perception. Below I have listed five ways to improve public art in Toronto. 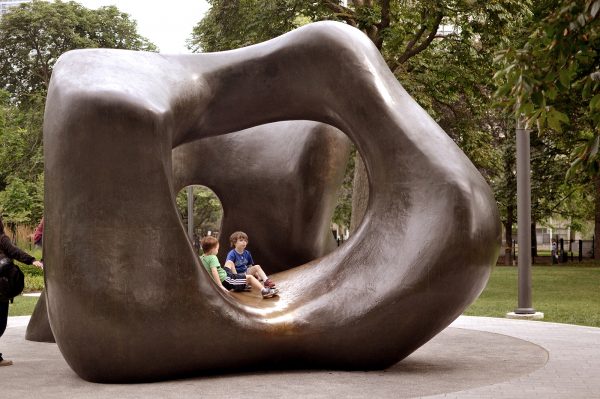 In the early 2000s, the City of Toronto created the Percent for Public Art Program, which stipulates that all major development projects must put aside one percent of their budget towards commissioning a work of public art. The results of this program have been immense. As Jeff Biggar and Ilana Altman noted in The Artful City Public Art Mapping, which traced the development of public art in Toronto from 1967 to 2015, almost two-thirds of the works commissioned in the last 50 years were created since 2005.

While the Percent plan has expanded the amount of public art, the program’s structure has led to an unequal distribution of these works throughout Toronto. As Biggar and Altman concluded, 50% of public art is now concentrated in the city’s downtown core.

In 2017, OCAD president Sara Diamond and a team of professors came to a similar conclusion. In “Redefining Public Art in Toronto”, Diamond and her team suggested various ways to correct the unequal distribution. Among their recommendations: create a comprehensive public art plan as well as various local plans. The former would apply to the whole city, while the latter would apply to local districts. Implementing both would ensure a more equitable distribution.

A public art master plan for Toronto would also encourage artists, planners, developers and elected officials to develop a common vision for Toronto’s public art landscape. A natural by-product of this exercise would be artworks that compliment and even reference one another, creating a dialogue among our works of art. This would allow Toronto’s public art pieces to enrich and problematize one another while also complimenting each other aesthetically.

Under Section 37 rules, developers have two options when commissioning works of public art: either the work can be installed on the development site or it can be erected on publicly owned land, i.e., off-site. The city can also pool funds from off-site works to finance larger, more expensive projects. However, off-site public art is rare. As OCAD’s study noted, between the years 2002 and 2010, only 20 artworks were commissioned using this method.

Too often, developers choose on-site art that is easy to erect and maintain, ensuring that it becomes a negligible, decorative feature rather than an art piece that enhances the public sphere.

By continuing to allow the majority of works to be commissioned for privately owned land (mostly near the entrances of condo towers), the City is effectively forestalling the development of a public art master plan that would promote a broader distribution of works across Toronto. 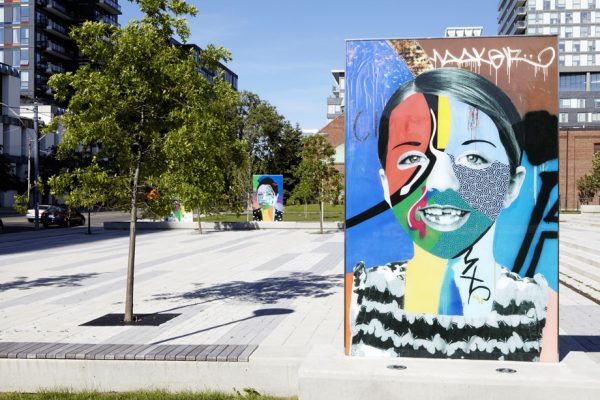 Commissioning off-site works of art not only facilitates and makes possible a public art master plan, it also allows for more site-specific works of art. A work is usually considered site-specific if it refers to some geographical, historical, cultural, ideological or sociopolitical feature of the space in which it is erected. An example of a site-specific work is Dan Bergerson’s Faces of Regent Park, which uses the community members of Regent Park as its subject matter.

By commissioning off-site works of art, the City would not need to compromise on artistic visions with developers and thus be able to commission artworks that reflect the identities and histories of Torontonians. In creating works that speak to the character of a neighbourhood or the history of a space, we have the potential to learn more about ourselves and others.

This approach would also encourage more works that speak to the Indigenous histories of various areas—a much-needed addition to Toronto’s public art landscape. Furthermore, commissioning more site-specific works could include public art that focuses on environmental action and climate justice. What could be more referential to a site than a work that speaks to the very land on which it stands? 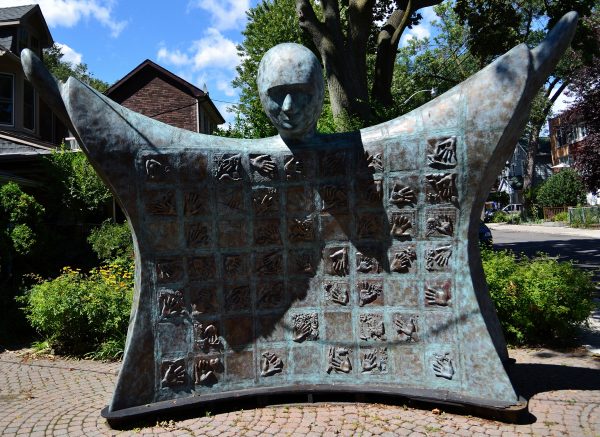 In the “Percent for Public Art Guidelines”, the justification given for public art is its ability to increase property values and “contribute to the local economy in the shops, cafes and businesses.” Public art, then, is meant to enhance both “private development and the public realm.”

This rationale may be necessary to get developers and elected officials on board with the idea of allocating funds towards public art. However, such justifications demonstrate that we need to completely reconfigure our understanding of the public sphere and public art.

To justify public art in terms of benefits to the private sphere is to disregard public art’s potential to spur engagement and discourse among city-dwellers moving through public space.

The public sphere has often been viewed as the locus of civic discourse and political action. Public art can help facilitate this kind of political momentum by provoking interaction and debate among citizens. When we reduce public art to decorative pieces for condo developments, we fail to realize the way in which such creative work is a public good in itself. 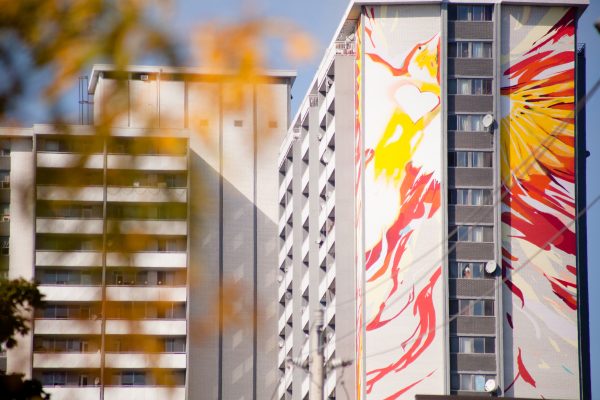 Reimagine what public art can do and be

Finally, we need to move past the idea that public art must be non-intrusive and passive, merely adding pleasantness to our lives as opposed to provoking engagement. When we go to art galleries, we do not expect all the artworks to be inoffensive. On the contrary, we usually assume the artworks will be disruptive, shaking us out of our passivity and encouraging us to rethink certain presuppositions. Why do we not expect the same of public art?

We may be able to handle dark or troubling works in a museum or gallery because we can leave them behind. We do not have this option with public art, as can be demonstrated in Stuart Reid’s piece, zones of immersion, an art installation at Union Station that consists of multiple seven-foot tall glass panels. The work is meant to capture the essence of what it is like to take the subway, and many of the images are of isolated, forlorn figures with their heads turned away from one another.

When revealed, Reid’s work was derided for being too depressing, with one Torontonian lamenting that she did not “want to get out of bed and see that everyday.” While I empathize with her sentiment, Reid’s public artwork need not be read as merely depressing. Rather, the panels are a fascinating reflection on social isolation within big cities and the connection this problem has to transportation and technology. Perhaps, the work presents an opportunity to reflect and readjust our preconceptions of what it means to live in a bustling city in the 21st century. By presenting some of the negative features of city life to the viewer, maybe the artist has given us a chance to confront and dispel the isolation we see represented.

The idea that public art should be unobtrusive and appeasing comes from the assumption that the public sphere is merely a transitional space between private domains. Rather, we need to see public spaces as sites of potential meditations, discourses and reconciliations. Public art, with its potential to help enrich the experience of public space, can change how we see ourselves, our society and our relationships.