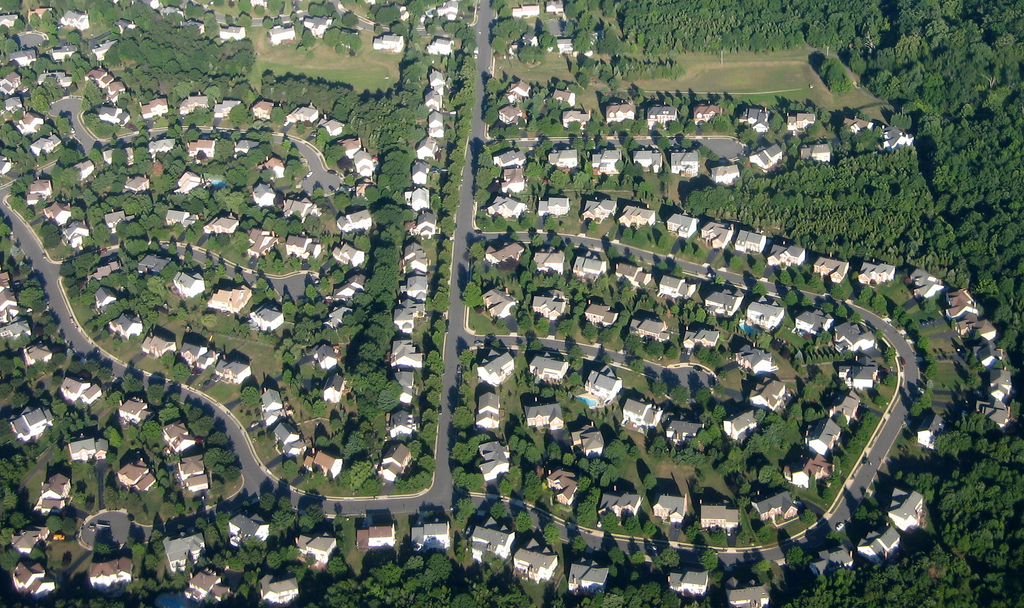 In the wake of the sudden and unexpected announcement of the termination of her position, the Environmental Commissioner for the Province of Ontario has released a 2019 progress report on energy conservation, A Healthy, Happy, Prosperous Ontario: Why We Need More Energy Conservation. (pdf) I had an opportunity to review a portion of it while it was being drafted, and I had a conversation with Dianne Saxe, the Commissioner, when the report was released.

The report is the result of year’s worth of work on the part of many people. They never knew for sure if they would get it out before the Commission was shut down. Thankfully for us, they did.

At the heart of all its recommendations is a need to reduce our reliance on fossil fuels. This is captured in a diagram at the top of the very first page of the report. 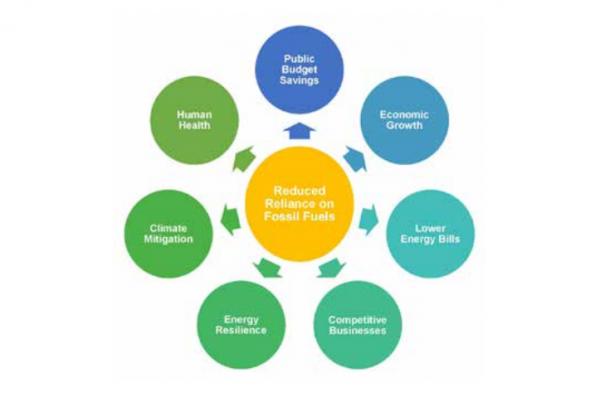 While the report is not explicitly directed at cities, it has a lot to say to them. The last of the report’s four sections is devoted to “Urban sprawl: the road to gridlock.”

One of the report’s greatest strengths is identifying the key role of land-use planning in creating landscapes and activities that produce or reduce greenhouse gas emissions. “Land use is an important lever that the provincial and municipal governments could use to reduce car travel” (page 130).

However, we are not moving in the right direction. “Contrary to good planning and best practices,” the report states, “the government is proposing to weaken the Growth Plan to allow even more sprawl….” (page 10). Sprawl adds pavement where we could keep farms and wild greenspaces, and it makes everyone travel farther than we should.

A map in the report (page 137) shows that per capita emissions in the urbanized areas of the GTHA are dramatically lower (up to 50 times lower!) than in the low-density residential areas, where housing is set apart from all consumer and employment destinations. More travel is required, both in terms of frequency and distance, to meet daily needs. In the absence of pedestrianized landscapes, safe bike lanes and good transit, that adds up to lots of driving.

We’re actually driving more kilometres per capita than we used to, rising faster than the population, even in the face of the need to reduce emissions. We are also driving less efficient vehicles like SUVs and trucks. The latter are now 66% of the market, up from 51% in 2012.

We need people to use private cars less. But in the case of sprawl, even alternative fuels or better transit would only be putting a patch on the problem, rather than solving it. This report argues that the critical first step is to build our communities differently: “up and in, instead of out.”

Saxe says that “land use is Ontario’s oil sands.” It’s the bad decision that determines the framework of so many other decisions. It has the biggest long-term effects. Every time we choose to build out onto productive farmland, to add development in unserviced areas, or to build exclusively residential areas at great distance from everything else, we lock ourselves into a future we don’t want. For Saxe, this is “a completely dead-end approach.”

Automobile-dependent suburban landscapes must be our focus for change. The vast majority of Ontarians who live in metropolitan areas live in such landscapes: 7.7 million of 11.3 million people.

Cars alone produce 20% of the province’s greenhouse gas emissions. Transit is 10 to 50 times more energy efficient. In other words, if we all took transit instead of driving, we could make all the same trips we do now (i.e. no change in lifestyle) for a fraction of the fossil fuel use.

But of course, that is currently not possible, because in many places transit does not go where we need it to. Local transit in many places is insufficient in its coverage or service. Intercity train service is very weak in this province, even in the more densely populated regions such as southern and eastern Ontario.

In addition to improving transit, we need to intensify housing wherever we can, and we need to bring employment, shops and services closer to or inside residential neighbourhoods. The suburbs have lots of room to accommodate more compact development. 5% of Mississauga’s vacant or under-used land is near transit. That land is already serviced and well located in terms of amenities. It is estimated it could accommodate an additional 435,000 residents with mid-rise housing and mixed-use development.

Some suburban areas are desperate for such development. These are the ones who are actually losing population, as houses and neighbourhoods designed for families with four or five children now house those with one or two. Adding gentle density would make the business and schools in the area viable again.

The report makes an excellent case for the steps that municipal governments can take, even in the absence of provincial leadership. Municipalities have great influence in land use – changes in zoning and development approval processes, for example, would make a difference in facilitating more “missing middle” housing. Don’t provide free parking for staff. Build cycling lanes and strong, accessible public spaces. We don’t have to accept the low bar set in the Growth Plan.

It’s also worth noting that the Commission has also just released a fact sheet (pdf) and background paper (pdf) that helps individuals learn what they can do themselves. We can make better vehicle choices, or even switch to transit. Those who drive the greatest distances and the most often can make the biggest difference.

As Saxe says, in the work to reduce emissions, individual choices are a great place to start and a terrible place to stop. Often our choices are constrained, through no fault of our own. One of the most important things we can do as individuals is to speak up. Your voice is one of the strongest tools you have to build a different future. We can educate, make demands, and help our communities prepare for the changes that are coming.

Sometimes, we are made to feel as though reducing our emissions is a burden or sacrifice. However, by undertaking compact growth, we are also building places that are more enjoyable, safer, healthier, quieter, more social, and more accessible for everyone. The action and investment will reward us greatly.

There’s much, much more in the report. I recommend everyone read it–and download a copy while you still can.

Two weeks ago, the Commissioner and her staff were finally given the specifics of their termination. The Office of the Environmental Commissioner for the Province of Ontario is officially closed as of April 1, 2019.