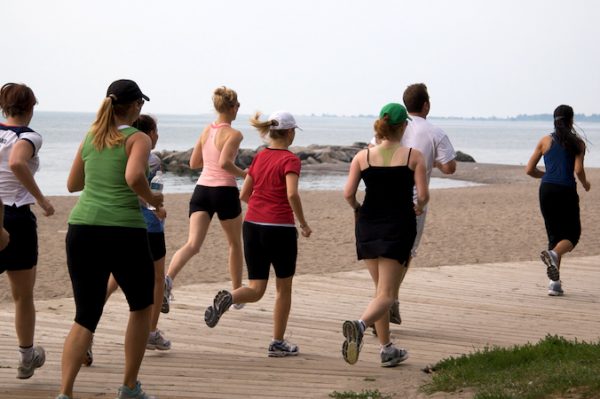 Running is often thought of as a solitary sport, a haven for those who enjoy being alone. Like walking and cycling, we typically think of it as a tool to escape the confines of the city and alleviate the pressures of daily realities.

So you might not expect running to be a very social exercise, but in many ways running can actually play a major role in building a more welcoming and inclusive city. “Running provides a unique balance between interaction and exercise,” says Mike Anderson, co-founder of BlackToe Running, an independent running store in Toronto.

The social nature of the sport stands out for its ability to connect people in places. Lawrence Bromley, an avid runner in Toronto, says his route takes him through a number of neighbourhoods and parks where runners share public space. He adds that the experience of sharing the road with other runners, and receiving a slight nod from someone you pass along the way, can reinforce a sense of belonging to a wider community. In this sense, although a lot of casual running can be completed alone, it is still a public exercise.

Runners are immersed in the everyday life of the city. Whether a serious athlete, a casual jogger, or someone who uses running to commute, this shared experience can create a sense of collective identity. When we think of the urban streetscape and public parks, the sight of people running has become a familiar image.

The growing interest in running is not surprising considering it doesn’t face the same economic and geographical barriers present in some traditional sports. Running is a form of exercise that generally requires very little equipment, and is also an activity that can happen in many environments, making it more appealing to those without the time to travel to sport facilities. “Running is such an easy thing to do worldwide,” says Bromley. It becomes a common denominator that makes it easier to form social connections.

There are also an increasing number of running crews in the city, big and small, that all contribute to notions of inclusion. These groups enable people to run together and so serve to connect runners and create communities of people with similar goals and desires. As well, in a rapidly growing city, they provide a focal point. By joining a running group, newcomers and residents establish a social network and generate an instant shared experience with other people in the metropolis.

For those who are new to the city, group exploration can also be a great way to discover new neighbourhoods. Dan Grant, manager of City Running Tours, an organization that helps showcase urban life in Toronto through the lens of running, says local residents can play an important role in guiding newcomers through unfamiliar areas. Being introduced to routes by fellow runners can help runners feel safe and strengthen their sense of belonging to the city.

“It is a great way for people to run through places where they might not feel comfortable running alone,” explains Grant. Our city’s quiet streets, laneways and informal paths may serve to create an optimal running experience, but with little “eyes on the street” there is a lack of safety that discourages people from running through these areas by themselves. The sociability of running is then an important tool for easing these challenges.

Running is also a sport that allows for greater participation regardless of skill level. As noted by Anderson, there is no expectation for runners to be fast or slow. Instead, there is an emphasis on creating a welcoming environment where people from all different levels can run together. In this way, running avoids the elite notions in some sports where a sense of camaraderie is sometimes influenced by skill level.

Taking the social benefits of running into account adds significantly to the discussion of sport in urban areas. Expanding this conversation can also benefit public health initiatives seeking to increase the sense of inclusion and accessibility in our city. While running is often viewed as a sport for solitude, it can play a major role in strengthening communities and facilitating connections.