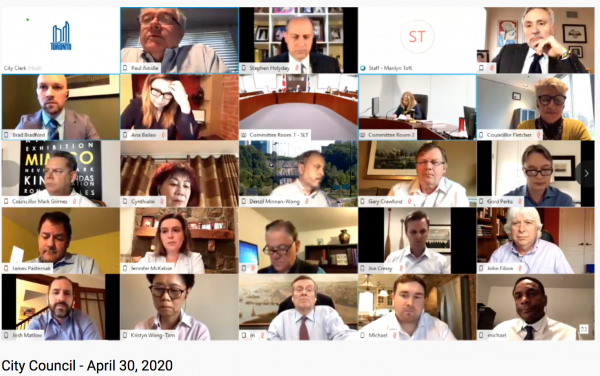 A guy at the park where I take my dog after dinner said the other night that he’d heard the traffic on the 401 last Friday was almost rush-hour like.

I have no idea if this is true or not. But the factuality of the statement is less important than the fact that this shard of rumour about the city’s collective reaction to the pandemic is now in play, traveling from person to person — like, dare I say, a virus — as it creates an impression that may inform future decisions.

Do I go out? Do I #StayHome? And what’s the rest of the city doing?

Driving places, apparently. Maybe I should, too.

Certainly, this past the weekend, there was a lot of not-staying-home, at least in the areas I travelled. The weather was beautiful and so people were out on their bikes, walking the dog and the kids, or with that other couple down the block that are counted as inner-circle friends and thus exempt from full-on distancing. The point is that people see each other out, and go out too, even if the City says not to.

If that, indeed, is what the City has said. Which, frankly, is not at all clear.

Everyone knows the PSA hashtag #StayHome, and most people also know the few top-line exceptions (food and pharmaceuticals, once a week). Still others – like me – go rooting around in the footnotes buried deep in the COVID-19 section on Toronto.ca to consult the language about physical exercise and dog walking (check and check).

The upshot: stay home, except when you don’t.

It’s also starting to feel as if the City and its public health officials are like the adult voices in those old Peanuts cartoons, honking like geese in the background as the kids ignore them. Or like the parenting guides that warn about the moral hazard of making empty threats to your kids when they misbehave.

To be clear: I do not mean to suggest that we should be ignoring our public health officials. On the contrary: we should be listening closely to their advice.

But it also seems to me that Torontonians are beginning to tune them out, for reasons that are surely as complex as this pandemic. There appears to be more car traffic than a few weeks ago. The two-metre safety radius is now more like 1.5 metres, and most people believe — correctly or incorrectly we don’t yet know – that hurrying past the other person, if that’s the only option, is sufficient. I saw one large west end park where all the benches were occupied, despite the Do Not Remain edicts posted all over the place. No one appeared to be especially afraid of being ticketed.

I don’t know that I’d characterize Torontonians’ response as mass defiance. There has, of course, been a whole lot of harsh media commentary and social media grumbling about the City’s tone-deaf decision-making when it comes to fencing off parks without providing alternatives, such as cordoned off road lanes, as is happening in many other cities.

It’s impossible to say whether prohibiting access to popular spaces like High Park has sent frustrated residents into other areas, like so many dandelion spores on a breezy day. Rather, my feeling (uncorroborated) is that our collective response to the crisis increasingly reflects our evolving perceptions of localized risk, which creates a treacherous dynamic between public health officials and residents.

Thanks to a wide range of factors — population health, demographics, crowding, culture, race, class, treatment protocols, testing regimes — it’s clear this singular global pandemic is a crisis with many faces. It evidently affects different places and even different communities within places, differently.

But we understand that geographic differentiation better now than even a month ago. Early on, alarming reports from regions like northern Italy and then New York City created a powerfully frightening narrative: coming soon to an ICU near you! These messages reached us sooner than wide-spread incidence of community infection, and so people here were highly receptive to stark warnings.

However, as the infection trajectories from different cities have grown more and more dissimilar, it seems natural and obvious that Torontonians began to pay closer attention to the information that originates closer to home.

What do most of us know about the local story of COVID-19? That it’s heavily and even mainly concentrated in long-term care homes, and among health care workers treating ill people. As of last Friday, Toronto Public Health was reporting under 6,000 known cases. The actual number is higher, of course, but I’d guess we’re still operating in an environment where most people know someone who knows someone with COVID-19, as opposed to knowing an infected person directly.

The general perception of the risk of imminent infection surely informs how people choose to react, or not, to public health warnings, even if, paradoxically, our earlier adherence to social distancing measures helped flatten the curve and thus produce the growing sense of safety that seems to prevail now, and which is obviously troubling City officials.

Unlike places like France and Spain, our governments didn’t send in the military and impose strict curfews to keep people off the streets. And unlike New York, we are not steeped in deeply disquieting stories about make-shift morgues in our parks, exhausted health care workers and ICUs buckling under the pressure.

In Toronto, we have more agency in our choices, at least for now.

I’d argue the City’s emergency response has largely failed to adapt to this rapidly evolving dynamic and the feedback loops built in to the process of informing a public that may be wondering about the boy who cried wolf. It doesn’t help that what’s presented in the media as scientific knowledge about the behaviour of the virus – and this information comes from around the world — is also a moving target that, in many cases, likely won’t stand the test of time or further scrutiny.

I understand and mainly agree with critics like my Spacing and Toronto Star colleague Shawn Micallef, who have accused the City and Mayor John Tory of slavish adherence to the status quo. That said, I also feel somewhat hesitant to judge harshly because the correct set and sequence of policy choices will only come into crisp focus – like the peak of the pandemic – in hindsight. Right now, the people in charge are trying to navigate without a map, in a blinding storm where one virus has produced many outcomes.

However, if there’s one way to ensure that the City’s response is more, well, responsive, it is for city council to abandon the emergency delegation of powers to the mayor and immediately resume the collaborative and transparent decision-making process that should never have been benched as an inconvenience.

Last week, council re-convened for the first time in a month for a virtual meeting via its Webex video-conferencing platform. In some ways, the session, which began with a staff report on making better use of virtual meeting technology, reminded me of those somewhat surreal post-amalgamation showdowns where this newly constituted mega-council debated about how it should debate.

We can and should have this conversation again, as the technology has exposed, to council as to so many other people, that getting all the bodies in the same place at the same time isn’t necessarily the only way to make decisions.

But for some technical glitches and the weirdness of seeing some of the councillors in their natural habitats, the meeting went off well, except for the decision to extend the mayor’s tenure as the sole decider for yet another month.

I’d argue that local councillors bring knowledge about how their constituents are handling the crisis back to municipal officials, and that information, in turn, can be used to make the City’s actions more localized and proactive than they have been to date. The critical importance of this feedback, and the public debate it engenders, must be seen as a feature, not a bug.

The central point is that pandemics, as every good epidemiologist has been taught, encompass both medical and social dimensions. But to date, the City’s response has been primarily informed by scientific and technocratic inputs, with far less consideration given to the social aspects, namely, how to actively encourage residents to comply with public health orders meant to limit illness and death.

I fear we’re going to have another kick at the can when a second wave hits. If that happens, I hope we recognize that local democracy — even the attenuated video-conference version — must be treated as integral to the crisis response rather than something we hastily send off to self-isolate for the duration.