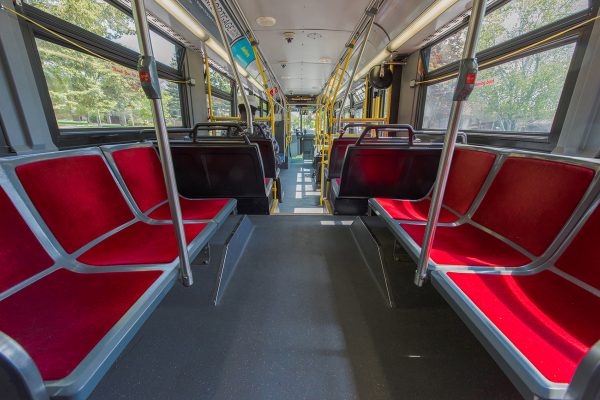 For years, transit advocates warned Toronto politicians in all three orders of government that the city’s transit infrastructure will forcefully slam into a capacity wall sooner or later, but probably sooner. Lots of evidence surfaced – falling-domino problems that could rapidly transform subway platforms into jammed death traps and send thousands of commuters onto clogged arterials, scrambling for buses.

Union Station, still in the midst of an interminable reconstruction, is expected to reach capacity within a decade or so, despite widened platforms and larger concourses. And as all GO commuters will attest, it feels drastically over-capacity at rush hour anyway.

All of a sudden, we are staring down the barrel of the worst of all capacity problems, which is that the system, premised as it is on brutally crowded TTC vehicles at rush hour, is not capable of delivering socially distanced service on anything that even faintly resembles an economically sustainable basis.

The vicious circle only gets worse. How do transit officials lure fearful customers back onto the TTC when the economy begins to come back to life?

And what happens to the financial picture? As the Toronto Star’s Ben Spurr reported and the city revealed yesterday, the TTC could see revenue losses top half a billion dollars between now and Labour Day, depending on various pandemic scenarios. (The City’s overall weekly cash burn rate is $65 million, according to a spokesperson.)

Could the agency go bankrupt? It’s not a legal possibility, as the TTC already depends on a large subsidy from the City of Toronto to supplement fare and advertising revenue. But certainly a rational answer to anemic post-lockdown ridership is drastic service cuts, which will serve to deter more of the returning riders who have choices in the way they move through the city, which means more losses, and so on.

In Saturday’s Globe and Mail, Oliver Moore outlined how transit agencies across Canada are trying to prepare for re-opening, from physical distancing marks on platforms to mandatory face masks, more off-peak service and public information campaigns. More frequent service and extra buses would be great, but seems unlikely given the extreme and mounting losses facing transit agencies.

As Moore also observed, “The problems facing agencies are not only of geometry – the passengers on a crush-loaded Toronto subway train would, if lined up at two-metre intervals, stretch more than two kilometres – but also psychology.”

The bottom line is that absent widespread testing or a vaccine, the TTC faces what seems like an impossible circle to square. “If crowds are inevitable,” Moore observes, “transit agencies will have to mitigate the risk in other ways, doing what they can to spread passengers throughout the day while also striving to convince riders the system is safe.”

Yet why should the responsibility for mitigating the safety risk rest entirely on the TTC’s shoulders? The problem and the stakes are far bigger than the TTC and GO, and therefore the solutions must be as well.

In fact, the question, to my mind, is whether the City should develop a transit version of the approaches used by supermarkets that now employ gatekeepers to patrol the entrances, ensuring that only so many bodies are inside at once.

To be clear, I’m not talking about measures as literal as security guards, although I fully expect to see the red-vested people herding traffic into stations. Rather, the solution must come from an explicitly statist approach to managing the flow of people onto transit, one that will require the cooperation of employers.

In many workplaces, what’s become evident, after almost two months of lockdown, is which jobs can be carried out remotely and which ones demand the physical presence of individual employees. Whenever the economy begins to lurch back to life, the segment of the labour force that’s capable of working from home and also relies on transit represents the buffer between transit chaos and a somewhat sustainable resumption of service.

To get there, City officials and employers will need to get their heads around the reality that they’ll have to collaborate closely to regulate the travel habits of their workers, at least for now. Simply putting marks on the platforms and running public service ads about off-peak hours won’t do the job. We’ll need rules.

As The Globe and Mail reported a few weeks ago, the managers of some large office buildings, as well as some of their major tenants, are trying to figure out how to get people in and out of these towers safely. The solutions will involve staggered arrival/departure periods for the occupants of different floors, as well as limits on the numbers of people in elevators and other measures. As the Globe noted, “teams of bankers, lawyers, accountants and commercial landlords are piecing together their own blueprints to tackle an array of logistical and health challenges.”

The City of Toronto, and other GTA municipalities, must get directly involved in this process, for example by requiring employers in high density, transit-dependent office employment nodes — downtown, Yonge/Sheppard, etc. — to create and submit detailed travel/commuting plans that involve elements like schedules for rotating staff between home and office, shifting work hours and meeting targets for cutting the number of employees arriving by subway, streetcar or commuter rail.

The goal is ensuring that peak hour volumes can be managed safely and with tolerable delays. But the paradox is this: for the TTC and GO to have a hope of regaining sufficient ridership to justify continuing operations and staunch the bleeding, both agencies need to find ways of keeping volumes down, temporarily. Commuters who find themselves too close to other riders or waiting interminably to get onto trains or in and out of stations won’t come back any time soon.

The balancing act will be excruciatingly delicate, and success turns on the City’s willingness to bring its full regulatory capabilities to bear, simply because the transit agencies on their can’t manage demand in this extraordinary situation.

The moment to begin this planning process is now, as employers still have time to canvas (their remote) employees and work out plans.

And to those who say that the City doesn’t have the resources, skills or mandate to become involved in the business of regulating the travel habits of workplaces in high density commercial nodes, consider the alternative: crushing traffic, over-whelmed parking infrastructure, and a gnawing sense, among developers, property managers and organizations of all scales, that continuing to operate in these dense employment hubs has become more trouble than it’s worth.

Downtowns have emptied out before. They could do so again.