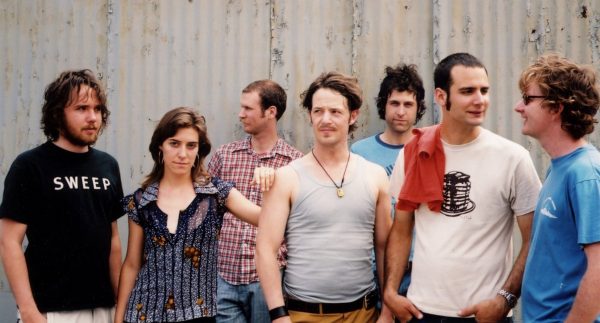 Spacing is teaming up with Coach House Books and Jonny Dovercourt to bring you partial and complete chapter excerpts from the new book on Toronto’s music scene from 1957-2001, Any Night of the Week(2020). Purchase your copy of the book on SpacingStore.ca. Check out Kevin Drew in a live chat with Jonny, today at 5pm via Instagram @brokensocialscene.

Broken Social Scene are usually described as a sprawling collective, their name a commentary on their large, fractured membership. They’re also also reductively labelled ‘indie-rock’ — which paints over the way their sound drew on different elements of the underground nineties: post-rock, dreampop, dub, folk, ambient electronica. The story of how BSS came together is like an explosion in reverse. Their various starting points all contributed to the band’s unique sound and modus operandi. And the process of how they all met one another is intimately tied with how their sound evolved.

Broken Social Scene began in 1999 with the collaboration of Kevin Drew and Brendan Canning. Seven years older than the wide-eyed, hungry Drew, Canning was already a road-tested band vet, and BSS marked his transformation from grinning, fresh-faced hHead bassist to wise, soft-spoken elder. Canning tempered young Drew’s lofty enthusiasm and arty indulgence with even-tempered experience and a focused pop sensibility. Eight years earlier, while grungy hHead released their first cassette and took over 1150 Queen Street West, guitarist Andrew Whiteman was playing in one of the most popular bands in Toronto, soul/funk collective the Bourbon Tabernacle Choir. Kevin Drew was fourteen and had just heard Dinosaur Jr. for the first time. It was ‘The Wagon,’ off Green Mind

Kevin Drew: That was the first time I heard a new song that I immediately related to. Chord structure, singing, everything. That changed the course of my life, because I thought, that’s how I feel. That’s what I want to do. But I didn’t pick up a guitar till I was seventeen.

Drew attended the acclaimed Etobicoke School of the Arts, in the inner suburbs west of downtown. His schoolmates included Emily ‘Metric’ Haines and Amy ‘Stars’ Millan, seniors who later became his musical collaborators.

He didn’t start a band in high school, instead making droning, John Carpenter–inspired imaginary soundtracks on a friend’s keyboard. In Calgary during a demoralizing tour to promote their unsuccessful major-label debut in 1994, hHead met sixteen-year-old Leslie Feist, a stunningly talented vocalist. She looked them up after moving to Toronto a few years later. Andrew Whiteman, meanwhile, having quit the Bourbon Tabernacle Choir, dove into the warehouse district scene, forming Latin rock band Que vida. He later saw Feist perform solo at We’ave, and the two hit it off.

In 1995, Markham drummer Justin Peroff took a break from playing in indie-rock bands to become an actor. He appeared on CBC TV starring opposite Sarah Polley in youth drama Straight Up.

Justin Peroff: I didn’t want the acting job because I wanted to be a touring musician. My parents talked me into it and said, ‘This is a great opportunity.’ I ultimately met Kevin Drew through that job. Mark Cohen, who played my best friend on the show, was best friends with Kevin Drew in real life.

KD: I met Justin and went to see him play with Kat Rocket. And immediately I was like, ‘This guy can drum.’ We started getting to know each other, and stayed in each other’s periphery.

On another plane of Toronto existence, singer/songwriter Jason Collett formed folk-pop group Ursula in 1995 with ex-L’.tranger frontman Andrew Cash. And in a smoke-filled Annex apartment, Charles Spearin co-founded Do Make Say Think. While at school for audio engineering, Spearin was approached by an amiable classmate.

Charles Spearin: I met Kevin Drew at the Harris Institute for the Arts. He came up to me outside and said, ‘you look like a guy who likes Tortoise.’ And that was kind of it. Tortoise was the icebreaker (to Stuart Berman, This Book is Broken, 2009).

KD: When that dropped, that was huge. A twenty-minute song – ‘DJed.’ It was TWENTY MINUTES! It was the coolest thing. Being a soundtrack kid, to have instrumental music suddenly be in the forefront, it was amazing. That’s what was so great about meeting Charlie, because he introduced me to Do Make Say Think.

DMST rapidly became Kevin Drew’s favourite band. Even at the tender age of nineteen, he displayed the fearless behaviour that would serve him well later: instead of copying his heroes, he recruited them. Drew and Spearin started a band called Djula; they played only a few low-key gigs at Club Shanghai and the Mockingbird, where Drew worked. But ‘playing in a band’ isn’t where they wanted to be. Kevin and Charlie just wanted to make music. So the duo holed up at home and began recording tracks that suited that sense of cocooning.

KC Accidental was what they named the project; KC = Kevin + Charlie. Meanwhile, Jason Collett was on the cover of NOW Magazine, promoting his alt-country project Bird. Brendan Canning was playing bass with Spookey Ruben; he and Kevin Drew were still two years away from meeting.

KC Accidental self-released their first CD – originally self-titled, later dubbed Captured Anthems for an Empty Bathtub – in 1998. They made only one hundred copies, on sale only at Rotate This. It was pretty, meditative, and tentative-sounding. They threw a CD release party at the Mockingbird, a pool hall at King and Portland, on the edges of Clubland, not at all a regular music venue – and Drew roped in Justin Peroff to drum, alongside DMST’s Justin Small and members of what would become Metric. Emily Haines opened on solo piano.

Despite the expanded personnel, it was, in some ways, a smaller, more melancholic record than the debut, but it was also more beautiful and original. It caught the ear of Joe English, a Harris instructor of Drew’s. He had started an indie label called Noise Factory records to support a Toronto glam-pop group named Nancy, Despot – but frontman Brian Gunstone passed away in late ’96. English restarted the label with the help of Drew, who assisted in the curation of a CD compilation, Beautiful Noise (The Apocalypse), consisting mostly of Toronto-based ambient, experimental, and electronic projects. Noise Factory released the comp in late ’99 and the KC Accidental album in early 2000. Both received an indifferent response upon their release.

If Could’ve Bin Pills has a weakness, it’s that it sounds too much like Spearin’s other group. Drew knew that he had to do something different to set himself apart.

KD: I was on a mission. I knew what was happening. I knew the right thing to do, and I knew Do Makes were doing something special and I couldn’t do that. I had to get away from that instrumental style, because they just did it so well.

In between the release of the two KC albums, Kevin Drew and Brendan Canning finally met. There are a few different versions of the story of how they met, all involving various mutual friends and drinking in different bars on College Street. Canning had been on a journey through all the stages of grief and rebound after the breakup of hHead. In 1999, the year he and Drew met, his voice could be heard on pop radio, on the surprise crossover hit ‘Steal My Sunshine’ by Len.

Brendan Canning: You’ve got to go through some periods before you find the winning combination. hHead got me to a certain level – you make lots of friends, then you move on to another band. I could play with Spookey, then you’re going to Japan or England, stakes are a little bit higher. Then you’re in Len – it’s like, oh this is kind of a weird situation. Then By Divine Right, okay, this is fun. But I’m still not a songwriter in this group – what the fuck, I’m not a sideman.

Before joining By Divine Right on bass, Canning thought he was done with rock music. He took his first hit of E, and decided he wanted to play house music. As the Champ, Canning became one of Toronto’s most ubiquitous party DJs, spinning disco, funk, reggae, and other feel-good jams.

By Divine Right became a four-piece when Leslie Feist joined on second guitar. At that point, the band was on Sarah McLachlan’s label Nettwerk records and opening for the Tragically Hip; they spent most of 1999 on the road, and it broke them. When they got home, Canning and Feist decided they didn’t want to be a part of anything with a whiff of ‘Canadian music industry.’

BC: One night me and my friend Richie Cureton were hanging out on College Street. And Kevin was with Stephen Chung, a photographer friend of ours. They were going to go listen to the new KC Accidental. And me and Richie, we went back to his place and listened to the old KC Accidental. And then I started calling Kevin. I was like, ‘Hey, we should do something.’

Leslie Feist: The power of Brendan and Kevin finding each other was pretty intense. They were like a complete symbiosis of each other. And personality-wise they complemented each other perfectly: Canning is so chill, and Kevin’s such a spark plug. (This Book is Broken)

In addition to the temperamental equilibrium, the union of Canning and Drew represented the combination of experimental bedroom abstraction and super-connected music-industry know-how. In the fall of 1999, Do Make Say Think flew to Europe for the first of many well-received tours.

While they were away, Spearin lent Drew his eight track reel-to-reel, the very same Tascam 388 Portastudio that he’d moved into DMST’s original Albany apartment. Canning kept coming over to Drew and then-wife Joanne Goldsmith’s house in the charming residential neighbourhood of Little Portugal, then on the cusp of gentrification. The tracks they recorded together were in the continuum of KC Accidental, if not even more ethereal and untethered to rock-band conventions. But the songs were also shorter, more concise, and for the first time, featured   vocals – though often dreamy and wordless. Many of the same kc contributors came back, along with a new guest, Feist.

Another Do Make Say Think EU tour came around the following fall. Two band members were unable to commit to all the dates, so Spearin recruited his KC Accidental pals Drew and Peroff to fill in. The tour was a taxing one, with tensions running high – especially for the new recruits. Drew was by his own admission, a little green and not ready for sleeping in squats an ocean from home, harsh conditions to which DMST were already accustomed.

KD: It was just the greatest thing in the world. I loved it, but they were tough. They were tough dudes to be out on the road with. I’m just really a sensitive, little emotional kid and they were not. But that experience really helped me be in a band.

JP: Kevin and I did not get along at all during that tour. But on the flight to Europe, Kevin handed me a CD which said ‘Broken Membership.’ Which is what Kevin wanted to call the project. They had just mixed or mastered the album. He said, ‘Take a listen and let me know what you think.’

I listened to it on the flight and I thought it was a beautiful album. upon returning home that fall, Kevin Drew called me up and asked me if he could do a solo set at Wavelength. We already had two bands booked for December 17, 2000, at Ted’s Wrecking Yard – the Russian Futurists and Raising the Fawn – but I said yes and added him as a third act to open. He told me to list him as ‘John Tesh Jr. & the Broken Social Scene.’

photo by by Jeffrey Remedios