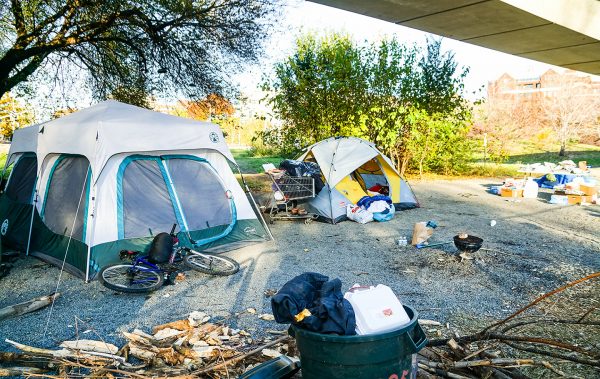 According to a 2018 Toronto Street Needs Assessment, there were 533 “rough sleepers” in Toronto — that is to say, those homeless Torontonians who would rather sleep outdoors than stay in the overcrowded shelter system. However, well known street nurse, activist, and author Cathy Crowe estimates there could currently be between 1,000 to 1,500 individuals sleeping either on the streets or in homeless encampments.

If Crowe is right, what explains the nearly threefold increase?

Sanctuary is a not-for-profit organization that serves Toronto’s homeless population. According to Greg Cook, who works with Sanctuary’s outreach team, Crowe’s estimate is not that far off. He cites a number of reasons for the increase, the recent COVID-19 outbreak in the shelter system currently the most significant among them.

According to Cook, “there are no official [City of Toronto] stats (for 2020) on how many people are currently sleeping outside or how many encampments there are.” However, he goes on to say that, “in 2019 and 2020 [even] before the COVID-19 outbreak, everyone — outreach workers [and] the media — were acknowledging that there were more tents in Toronto then ever before.” He cites increasing housing unaffordability, increasingly overcrowded homeless shelters and the spring closing of the City’s emergency winter respite sites as the primary causes.

Cook also blames “the institutional set up of [homeless] shelters” itself. Having “50 to 100 people warehoused in a big dorm is going to ensure a context that is dehumanizing, both for residents and staff.” And, he adds, “of course, the adverse effects of this are felt more profoundly by residents.” So it appears that even before the pandemic, there were already legitimate reasons why someone might prefer to sleep outdoors rather than in a shelter.

“Then Covid hit,” says Cook, “ and encampments and tents [were] everywhere.”

Between April 8 and May 8, the number of COVID-19 cases in the shelter system jumped from eight to 258, according to City data. By May 15, the figure rose again to 341. Those statistics may have in part spurred even more of an exodus from the shelter system and added to the number of rough sleepers and homeless encampments. (To date, of the total 482 reported cases, there are 170 active cases, 309 recoveries and three deaths.)

The City’s statistics on the current number of people staying in shelters, when compared to the shelter system’s pre-COVID-19 capacity, support the notion of an exodus. The total number of residents in the men’s, women’s and mixed adults’ shelters has been almost cut in half, and currently sits at 2,338. By contrast, the pre-COVID-19 capacity was 4,337. Keep in mind that before the pandemic, those shelters were at or near full capacity.

But can the outbreak in the shelter system explain a nearly threefold increase in the number of people sleeping rough?

Cook thinks it could account for those increases, at least in part. He is not the only outreach worker to notice a dramatic increase in rough sleepers. According to Cook, “one outreach agency off the record stated that [since COVID-19], the number of encampments has tripled,” lending further credence to the accuracy of Crowe’s estimate.

There are likely other contributing factors. The economic shutdown may also have contributed to the increase. When the Ontario government declared its COVID-19 state of emergency in mid-March, it issued emergency orders mandating the closures of coffee shops and restaurants, except for take-out and delivery. These closures had a direct negative impact on Toronto’s rough sleepers. It meant that they had no place to seek shelter from the elements, except in homeless encampments.

The partial closure of those agencies that deliver programs that many homeless people depend on, such as the Ontario Disability Support Program, may also indirectly contribute to the increase in rough sleepers. Fewer staff limits the capacity of these agencies to respond to their clients’ needs and creates delays in response times. The net result is that even those willing to risk getting COVID-19 in the shelter system for the sake of a warm bed and a roof over their heads can be left quite literally out in the cold.

Roxie Danielson is a registered nurse and homelessness advocate who works in harm reduction with Toronto’s Inner City Family Health Team. Her tweet (below) from May 5, when we were still in the grip of unusually cold spring weather, sums up the problem:

“Spent 1.5 hrs on hold with ODSP before client decided to try calling again tomorrow, only to call Central Intake for a shelter bed to be told to call back in 1 hr. This is how our system works for homeless people…it doesn’t. He will sleep outside again. @JohnTory @bradrossTO”.

How are City officials responding? In an email, a spokesperson stated that the City “paused encampment clearings at the start of the pandemic and that ‘encampment clearing’ is not being done unless [the City has] a safe space to offer people living outdoors.”

The spokesperson goes on to say that “as of May 22, 2020, [they] have helped at least 157 people move to safer spaces inside. [A]s a result, at least 10 encampments have been cleared.” However, the spokesperson did not specify exactly what constitutes “safer spaces,” nor whether any of those individuals were actually housed.

In 2017, the City cleared 313 encampments and another 300 in 2018. In other words, even before COVID-19 and the economic shutdown, Toronto was at best breaking even in its attempts to rid the city of them. No matter how many encampments the City cleared annually, roughly the same amount sprang up the following year.

The City’s approach to homeless encampments was clearly ineffective when the number of rough sleepers was one third of the current estimates. Why the City is still pursuing that same failed approach, especially during a full or even partial economic shutdown, defies any rational explanation.

Fear and irrationality aside, homelessness remains the proverbial elephant in the room. Due to the recent outbreak in the shelter system, the elephant is trumpeting the obvious solution to that problem with greater resonance and urgency than ever: HOUSING!

John Clapp reports on affordable housing and homelessness for Spacing and Toronto Storeys and is a contributor to House Divided (Coach House Books, 2019). He wrote about being homeless in this city in July for Toronto Life. Follow him on Twitter at @JohnCla14975279.