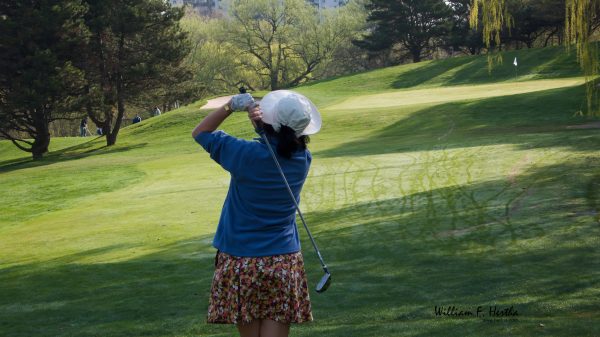 Public space has never been so popular. Over the summer in Toronto, we saw streets closed for active recreation, parks filled with people young and old, and bike lanes popped up almost overnight. While the Covid-19 pandemic has led to the re-imagining of how Torontonians use public space, large tracts of city-owned parkland in Toronto’s inner suburbs remain inaccessible to nearby communities.

The City of Toronto owns seven golf courses but fully leases out the operations of two. Five courses – Don Valley, Dentonia Park, Humber Valley, Scarlet Woods, and Tam O’Shanter – are maintained and managed by the city, but services like ticket sales, cart rentals, lessons, and food and beverage operations are contracted to private operators.

At its meeting this week, City Council is set to vote on whether to renew the operating licenses for the five city-owned golf courses for another two to three years. But a diverse coalition of non-profit organizations, local community representatives, and leaders in the BIPOC-led urban agriculture sector are calling on council to launch a public consultation on the future of these parklands before renewing golf course operating contracts.

“It’s clear that there’s a need [for] dialogue to be had about not only the specific issue of golf courses, their renewal, and how they should be used — but actually [there is] a bigger conversation about city land,” says Melana Roberts, chair of Food Secure Canada and a member of the Toronto Food Policy Council. “Public land should be in the interest of the public good and all city land should be open to consultation on the best uses, prioritizing the needs of local communities.”

Pre-Covid, Toronto’s golf courses had seen a decline in use, reflecting similar trends across Canada and the U.S. Between 2007 and 2016 there was a 15.5% decline in rounds played. Although the city-owned courses bring in about $5 million in revenue annually, they operate at a loss and about $10 million is needed for additional maintenance beyond operating costs over the next 20 years.

In 2018, the city initiated a third-party review of golf course operations. The review, which was due in early 2019, was to include recommendations for alternate service delivery and alternative use options for the next 20 years. While it remains unclear as to whether this review has been completed and if it will be released to the public, the City of Toronto’s Government Management and Licensing Committee recommended at its September 14 meeting that the operating licenses be renewed to ensure the contracts don’t expire without a replacement. According to a city spokesperson, “It will also allow the City time to include considerations resulting from a unique 2020 operating season,” which saw a 6% rise in golf course usage during the pandemic.

While city-owned golf courses tend to be more affordable than private and can introduce new players to the sport, they can still present a barrier for nearby communities. Not only can they limit connectivity to other green spaces, but local residents may not be able to afford to use the space. All five of the courses are located in the city’s inner suburbs and four are situated in low income neighbourhoods. Furthermore, three of the courses – Humber Valley, Scarlett Rose, and Dentonia Park — are located in communities the City has identified as Neighbourhood Improvement Areas (NIAs).

These communities should guide our conversations about how these public lands should be used now and in the future. Heather Marshall, campaigns director with the Toronto Environmental Alliance, explains, “When we realize this isn’t just about golf courses, it’s about 150 hectares of public parkland and who gets to decide its future, it only makes sense to bring this forward for meaningful public consultation.”

While Covid-19 has presented many challenges, it has also revealed some opportunities to rethink how we plan and develop our public spaces. How could city-owned golf courses better meet the needs of local communities for the short and long term? Here are a few ideas:

Nearly one in five Toronto families face chronic food insecurity, and this number is much larger for Black and Indigenous people. In Toronto Life, Paul Taylor, executive director of FoodShare, wrote about using city land to establish permanent community-led urban farms and produce markets in these spaces. Golf courses could be re-imagined as new sites to support urban agriculture, where community members can grow and sell their own food and develop new skills.

Golf courses can be transformed as sites for Indigenous gatherings, ceremonies, traditional gardens, medicines and other activities. They can also become spaces for healing. A recent pilot undertaken by Native Child and Family Services Toronto (NCFST) looked at the how a trauma-informed land-based response to COVID-19 could benefit Indigenous families. The organization found that families that were unable to access services also lacked access to green space. NCFST invited Indigenous families that were self-isolating to participate in a number of culturally specific activities in three Toronto parks. This resulted in improved mental health for children, decreased stress for parents, and increased physical activity for both.

Compared to the surrounding ravine system, Toronto’s golf courses contain less biodiversity and fewer trees. The courses are also permitted to use pesticides and herbicides to maintain the greens, which can be harmful to the local environment. Re-naturalizing some of these spaces could move the city forward in its sustainability and climate resiliency goals. For example, in Port Washington, Wisconsin, a 116-acre golf course near the shore of Lake Michigan was converted in 2017 into a nature preserve. Extensive ecological restoration work was conducted to address the negative environmental impacts of the former golf course, with the creation of a woodland, wetland, and prairie habitat for migratory birds, native reptiles, amphibians, and fish. Similarly, in London, U.K., Beckenham Place Park, which operated as a public golf course for more than 100 years, was transformed into London’s biggest public park, featuring recreational amenities and restored natural habitats including wetlands and wildflower meadows.

The city has the opportunity to address the shortage of large parks in the inner suburbs. According to the City of Toronto’s 2017 Parkland Strategy, large parts of the city have a low supply of District and City parks, especially between downtown and North York, and parts of north-west Scarborough and Etobicoke. Access to green space has been identified a key social determinant of health. During COVID-19 it is especially important as people living in densely populated neighbourhoods are asked to stay close to home to avoid spreading the virus. For example, Dentonia Park Golf Course, in Scarborough, is located within the Oakridge neighbourhood and next to Crescent Town, both identified by the city as Neighbourhood Improvement Areas. The communities are dense and diverse, with 60% and 78% of the population, respectively, living in apartment buildings five storeys or higher. Access to free, open public space is essential for the well-being of these communities.

(Clarification: According to the 2017 Parkland Strategy evaluation, the city doesn’t rate the Crescent Town complex, which is just west of the Dentonia golf course, as having inadequate park space. However, the neighbourhoods immediately south, near Danforth and Victoria Park, are identified by the city as “areas of parkland need.”)

The Covid-19 pandemic has illuminated how public spaces are essential for physical, emotional, mental, and spiritual wellbeing. It has also shown us how much work still needs to be done to ensure that every Torontonian can enjoy the benefits of public space.

Cara Chellew is a public space researcher and writer based in Toronto. She is an organizer for the Toronto Public Space Committee and the founder of DefensiveTO, a project that documents defensive urbanism in Toronto and beyond. Follow her on twitter at @CaraChellew.