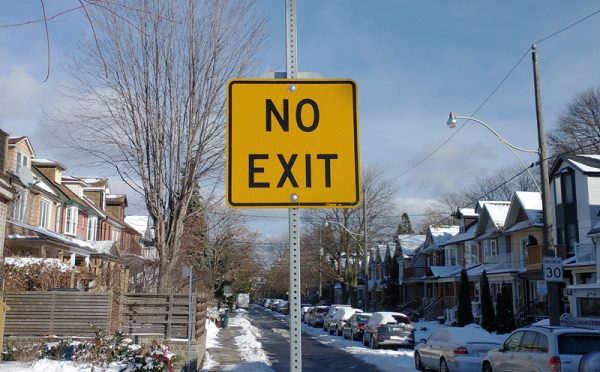 It’s the kind of thing that has always hung out at the edge of our urban consciousness, that we used to occasionally notice and find irritating, but not often enough to actually do something about it. The sign says “No Exit” – but if you’re on foot, or sometimes on a bike, there actually is an exit. And maybe it leads to a shorter route, or somewhere you actually want to go, or somewhere worth exploring.

Since the pandemic and its various lockdowns kicked in, many of us in Toronto have been folded back into our neighbourhood by unemployment or working from home, forced to get our exercise by local walks and, in the process, deepen our knowledge of the streets and passageways that extend from where we live. And as we walk, we’ve realized in so many ways that the city has not been designed and, more specifically, signed for travelling on foot.

It makes a difference, too – if you are exploring new areas around your home, is this a street you can walk down to get somewhere, or not?

I turn back around, but North doesn’t look very promising (lots of towers) and I’ve already been South. I know sometimes these signs aren’t 7/ pic.twitter.com/t6duKgMzJD

In the past, it’s always seemed like these false “No Exit” signs must be just an occasional problem. But when Sean Marshall and I, inspired by the tweet above, began crowdsourcing a map of these instances (for Walk Toronto, where we’re both on the steering committee), we got an overwhelming response. The map has 450 separate examples so far, and more are likely to be added.

And we’ve released a wave of frustration in Torontonians who have been irritated by these misleading signs for years. There’s really no better evidence of how car-oriented Toronto has been for so long than the fact it has never occurred to anyone at the City to have signage that applies to pedestrians in these situations.

This “Yes Exit” project for pedestrians and cyclists is a grand idea! https://t.co/YOKrebl9YE

My Spacing colleague Shawn Micallef even wrote about this problem back when Eye magazine existed – yes, that long ago. Nothing came of it then, at a time when walking wasn’t considered worthy of much attention. But times are changing, and especially with the pandemic, Toronto is starting to recognize that walking is an important way of getting around.

We have hopes that, this time, the City will actually do something about it. If we’re starting to recognize that walking and cycling are important and valuable parts of our transportation system, then our signage should be inclusive, relevant, and accurate for those on foot and on bikes.

There’s a few options. The ideal would be, in these locations, to have the signs say “No exit for motor vehicles” and then, below, a pendant sign saying “Pedestrian access to …” (or “Pedestrian and cyclist access to …”), specifying the destination, so walkers know where they can get to. Accessibility information would be valuable, too – Sean has mapped stairs separately so that walkers with mobility difficulties or who rely on mobility devices know what they would face. As well, some access points might lack curb cuts or have other accessibility obstacles.

But if the City doesn’t want to go to the expense of replacing the signs, then at least adding a pendant sign saying “Pedestrians excepted” (or “Pedestrians and cyclists excepted”) would let walkers know there might be something to explore beyond the end of the street. They could be like the simple “Bicycles excepted” signs added to “no entry” signs on one-way streets when contraflow lanes are installed.

It’s time for our street signs to recognize there are more ways to get around than just driving – and to encourage people on foot to explore the little-known byways of this city.