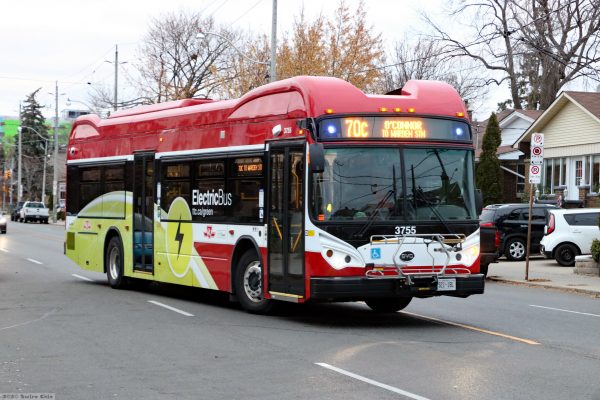 Two numbers, and a thought experiment.

Exhibit A: According to the City’s latest estimates, the cost of the Eglinton East LRT (Kennedy to Malvern) has now doubled, to $4.4 billion – an eye-watering sum for surface rapid transit, no matter how worthy.

Exhibit B: the federal government this week announced a $2.7 billion fund to buy 5,000 electric buses and charging infrastructure for municipal transit agencies, which comes on top of an earlier pledge by the Canada Infrastructure Bank to invest $1.5 billion in e-buses.

My thought experiment is this: why, instead of the ceaseless melodrama of the subway/LRT projects that only get more costly by the quarter, are we not pouring money into a first class e-bus fleet running on dedicated rights-of-way on arterial roads across the city?

If the TTC allocates even a fraction of the capital into this kind of BRT network — no-carbon buses, high frequencies, reliable service, and therefore far less over-crowding — it can deliver huge mobility gains to parts of the city that wait and wait and wait for better transit. The TTC could also use those funds to buy comfortable commuter-style buses with wifi to attract new riders and move the modal split numbers.

There would be other pay-offs in terms of manufacturing and operator jobs created, lower embodied carbon (far less concrete), reduced fleet emissions, and long-term hedges against future price increases in diesel fuel as carbon tax increases are phased in.

The TTC already has what it claims is North America’s largest e-bus fleet — 60 buses purchased last year through a $140 million federal/city program.

But the agency, institutionally, is one of the best integrated bus operators of any transit system, with 2,100 vehicles covering routes totalling 6,900 km, delivering slightly more passenger-kilometres in 2019 (235 million) than did the subway. It’s what the TTC does well, and efficiently.

I have been a proponent of LRTs since the Transit City days (mid-2000s), but I increasingly wonder whether the City and its transit advocates have been leaning in to a project that is doomed, if not to failure than to outrageous complexity, cost and delay. For reasons that don’t need to be elucidated here, the City and council has an exceedingly difficult time building rapid transit, and this peculiar short-coming is now almost two generations old, with plenty of very recent examples to illustrate the point (Scarborough RT replacement, Ontario Line, etc.).

The pandemic has forced so many people, companies, and institutions to think about old problems in new ways. In a matter of months last year, the City built bike lanes that had been mired in controversy for decades. Council last summer also approved a motion to accelerate the development of five bus-priority corridors on arterials across the city.

As of 2019, the budget for that project was $42 million, most of it unallocated, according to The Toronto Star. That sum is just over 1% of what’s budgeted for the Eglinton East LRT, currently.

Our eyes have long glazed over the differences between those millions and billions. It’s akin to the difference between buying a box of crackers and a week’s worth of groceries. But surely at some point, the city and its residents have to reckon seriously with vastness of the opportunity cost, not to mention the human and environmental toll.

The confluence of a number of factors — unprecedented federal funding for e-buses, accelerated decision-making by council, the long-awaited commercialization of electric bus technology — has opened up a generational opportunity to change directions, for the better.

The city could decide to not only deploy its e-bus fleet on those corridors, but also significantly boost service levels from current benchmarks as a way of determining whether the old formula, about price, convenience and service, will attract new riders to these routes.

It’s sometimes said that city buses don’t trigger intensification, nor do they lure people with options out of their cars. The most commonly cited examples of BRTs, moreover, are in Latin America and cities like Bogota, Colombia. But Ottawa’s OC Transpo BRT network served middle-class suburbanites for decades, while GO’s express bus fleet has pumped 905 commuters into GO and TTC stations for just as long.

With a handful of exceptions, the city has never really tried to offer exceptionally reliable, high-frequency bus service on dedicated rights of way over a broad and inclusive geography. From where I sit, the federal e-bus program offers a spectacular opportunity for the city to make strides on a range of fronts – environmental, social, spatial, fiscal, etc.

If the experiment doesn’t work, we can revert to the old ways, and the Godot-like wait for a transit future that never really arrives. But with so much federal money now on the table, it seems like a waste to not even try.