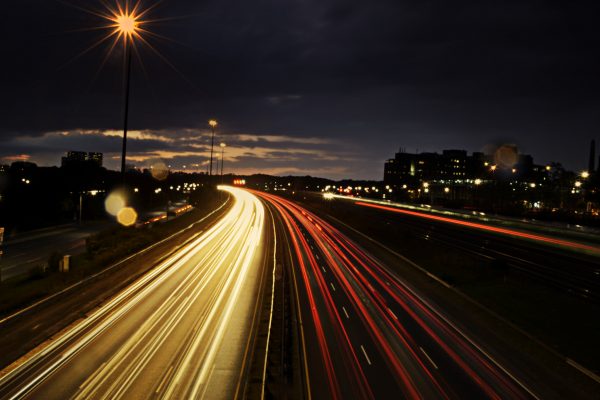 It’s almost spring and the evenings are getting warmer, which means that on most nights now, but especially weekends, the city’s network of mostly empty main streets will be mutating into a giant, noisy, and treacherous drag-racing course.

American Graffiti, meet Dupont. And River. And Bayview. And Bathurst. And the Don Valley Parkway, And the Queensway. And Kingston Road….

Another win for Vision Zero.

Street racing is by no means new in Toronto. Yonge St. has attracted muscle cars for generations. But the pandemic, with the precipitous decline in traffic on most thoroughfares, especially at night, threw the problem into high gear, if you pardon the car pun.

As a BlogTO story from last spring noted, “Figures released…by Toronto Police show a 600 per cent jump in stunt driving incidents between March 23 and April 27 of 2020, from just 32 in 2019 to 222 during the same time period this year.” The Drive similarly reported “rampant” racing on empty highways after the pandemic emergency was declared last March.

Following a welcome respite over the winter months, I can again hear the muffler explosions, squealing tires, and (compensatory) gunning engines each night across the west end where I live. On Saturday evening, while out walking, I watched a souped up car roaring north on Christie and taking a left on Davenport at easily 80 km/h, as if it was the hairpin at Monaco. There’s no chance that anyone in the way of that vehicle would have survived the collision.

When I tweeted about this scourge on Saturday – challenging Mayor John Tory, city council, and the Toronto Police Service to find some kind of solution — I got replies from all over the city, from Scarborough to Etobicoke to North York to the lake, about similar conditions with virtually no evidence of effective enforcement.

Eventually, someone on foot or bike will die in a completely preventable collision. Not may. Will. That doomed individual — a son, daughter, parent, sibling, friend — is out there now, living in the city; they just don’t know what’s coming for them.

The City, to be fair, has been working on calming by adding stop lights and warning signs near schools; boosting certain types of enforcement and, most notably during the pandemic, expanding the bike lane network. Downtown councillors like Mike Layton, Paula Fletcher, Joe Cressey and Kristyn Wong-Tam have been instrumental in pushing council to build long-sought lanes as well as create better barriers to protect cyclists who are using them.

For many people, their primary interaction with night-time street racing is the incessant noise. For car owners, it’s incredibly easy to buy the specialized mufflers and engine enhancements; some cars even have built-in gunning features. For residents, by contrast, it’s incredibly difficult to report said noise in a meaningful way; after all, the culprit is not the party palace next door but a vehicle that speeds by at night.

Layton points out that council has looked how to deal with these sounds as part of a never-ending review of the noise by-law. As a 2019 submission by Layton noted: “Noise in our city takes on many forms, but few noises are as elusive and frustrating to deal with than the screeching engine of a modified street racing car, or motorcycle. The noise comes without warning, but can generally be anticipated in some neighbourhoods that have high levels of nighttime economic activity.

“Sleep deprivation due to intermittent loud noise can be a health concern. I have heard from residents across Ward 11 who are experiencing this and have serious concerns about the noise being generated from vehicles racing up and down their neighbourhood streets.”

He points to acoustics technology used in cities like Edmonton that works like photo radar to identify and charge suspected violators. Other critics have called for more photo-radar cameras on corridors known to become race tracks at night.

But on issues like this, the city inevitably moves at two speeds. One is the low gear of bureaucratic review, pilot projects, equipment purchases, bylaw reforms, etc. Even the noise by-law review, which is mostly about construction-related racket, isn’t finished, and it began in 2015.

The other speed, however, is the potentially more responsive pace of enforcement. The police say they’ve increased the number of speeding tickets they’ve been writing, and made much of a back-to-school safety campaign in September.

Enough? No. But as young people of colour in this city know all too well, the police are more than capable of making their presence felt in neighbourhoods. What’s more, we know how speed traps work. We know how a RIDE program blitz can both catch and deter DWI. We know what stern public education campaigns can do. Yet we also know that police chases kill bystanders, so clearly the preferred and safer option looks much more like RIDE and much less like action films.

None of this will happen until the Toronto Police Service, and the board that oversees it, learns to treat dangerous driving as not just a grave threat to urban liveability, but incompatible with the other ways we’ve been told to ride out the pandemic (more walking, more bike riding, etc.).

Better enforcement, what’s more, can never work if the system relies mainly on 911 or 311 complaints, because the process for reporting incidents is set up to fail. The witness never has enough information, and the perpetrator is long gone by the time the call’s gone through.

The one other piece of this puzzle has to do with the penalties provided under provincial traffic laws. The current legislation includes fines ranging from $2,000 to $10,000, demerit points, license suspension, and possible jail time. Paralegal firms that defend clients accused of driving infractions advertise their services for those facing these kinds of charges.

Deterrent? Hard to say. The potential penalties seem stern enough, but the proliferation of vehicles brazenly violating these laws suggest the drivers know they either won’t get stopped and charged, or will be able to get off if they do. The reality in this province is that you can kill someone with your car by driving recklessly and still never see the inside of a prison.

It’s easy to get tied up in all the legal and procedural minutiae, but the point is that the city, council and the police desperately need to find a better way of containing this normalized criminal stupidity as we head into spring and the risk of grave personal injury rises with each after-dinner walk or ride.

And to anyone who thinks the current approach is working just fine, I’d suggest they just stick their heads outside later one evening and cock an ear. Doesn’t much matter where you live. It already sounds like the Formula 1 weekend out there, and it’s not even April.