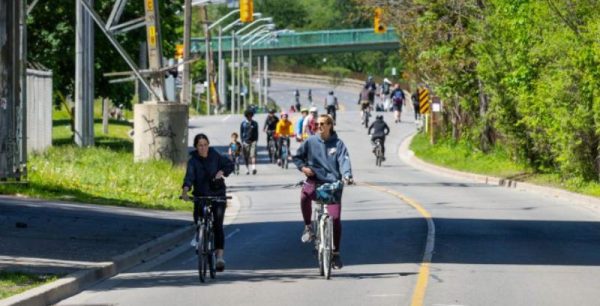 On a Sunday in the middle of May, I went for a bike ride along the south end of Bayview Ave., which was open to pedestrians and cyclists / closed to motor vehicles for the weekend as part of ActiveTO’s “Closing Major Roads” program. In a new expansion for 2021, the program extended all the way to Rosedale Valley Road, making it a more significant experience. (I then continued along the trail beside the road to visit the Brickworks and Chorley Park.)

Along Bayview, I encountered a wide variety of cyclists — from lycra-clad speedsters to groups on Bike Share bikes out for a leisurely afternoon — and also runners, groups of friends walking, and families with strollers. Because of the wide space, everyone could go at their own pace comfortably. And a joy of Bayview as an open street is that it is winding and part of the ravine system — you feel slightly separated from the City, in a way that’s rare on roads near the centre of Toronto.

What I didn’t know at the time was that this was actually the last time anyone would have the opportunity to use this stretch as an open street. The next weekend, the City announced that Bayview now had a “multi-use trail” along the side of the road and so somehow it no longer needed to close Bayview as a whole for ActiveTO. But it has still continued to list this multi-use trail — little different from any number of other bike lanes and trails — as part of ActiveTO.

The most painful irony is that it continued to use an image of Bayview in its full, lost, ActiveTO open street glory on the ActiveTO page, even as that no longer existed in practice (screen capture from June 4). 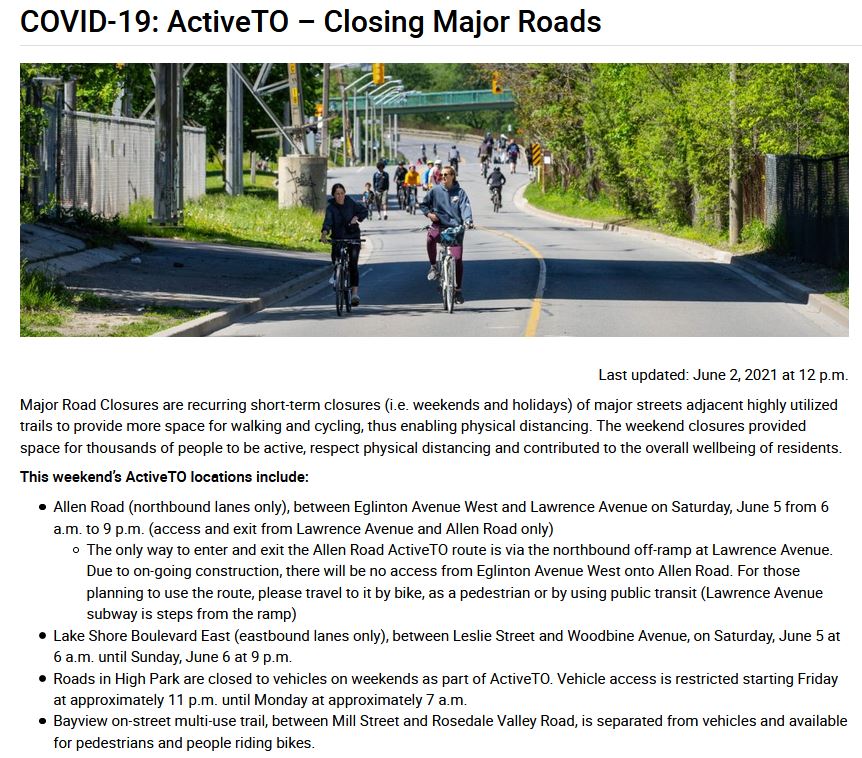 This is what Bayview actually looked like, on a visit last weekend. Without the open street, there were far fewer pedestrians and cyclists. There were also very few cars. 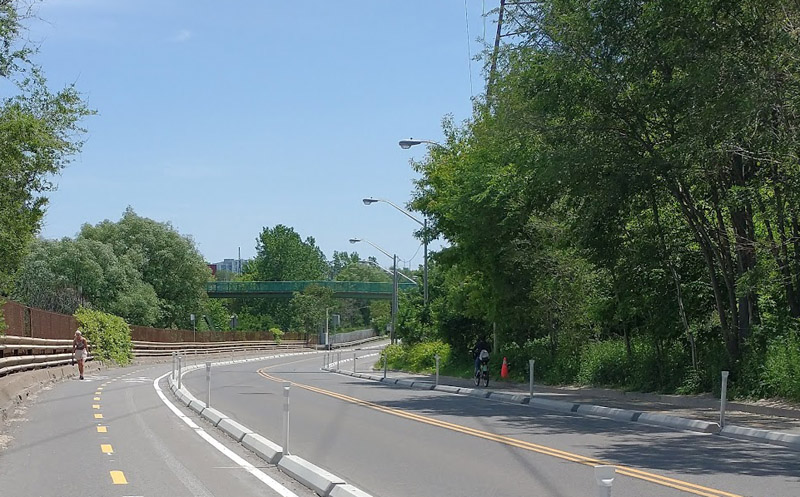 Now, the new Bayview multi-use trail is certainly a good thing – it creates a safe route for cyclists (and a somewhat uncomfortable but still pretty safe route for individual walkers and runners) all week long. It is not permanent, however — it is scheduled to last until 2022, as an alternative route when work is being done on the Lower Don Valley trail along the riverbank.

Whatever its benefits, though, it is not an open street. It’s a fairly narrow pathway. It’s good for cyclists who want to get further up the valley safely, but it’s not a space for a comfortable stroll or even leisurely cycle in a group. And, as my Walk Toronto colleague Adam Cohoon has written, it’s not a comfortable place for someone in a wheelchair — unlike the open street experience. One of the purposes of ActiveTO road closures is that they parallel paths and trails, providing a wider, open experience for those on foot and on human-powered or mobility-assist wheels rather than the narrow, often crowded spaces of our trails.

The Bayview ActiveTO implementation was successful. The Transportation Services ActiveTO report (PDF) stated that: “Two [Bike Share] stations were installed at the base of Bayview Ave at Lawren Harris Park and Front Street in June 2020. These stations generated approximately 10,000 trips on the weekends between June and November.” An average of 2,000 cyclists and 300 pedestrians a weekend used the Bayview Avenue open street. That wasn’t as much as the Lake Shore ones, but unlike the Lake Short closures to motor vehicles, the same report indicated there were almost no complaints about the Bayview closure at all. The stretch south of Rosedale Valley Road is not very heavily used by motorists on weekends.

The report also — in a note easily overlooked at the time — claimed that once the multi-use trail was in place the “the Bayview Avenue recurring weekend major road closures would no longer be necessary.”  But necessity has never been the purpose of ActiveTO — it’s a benefit, something the City does for its citizens to help them be healthy and happy. It’s an example of Toronto catching up with the many cities in the world that close off streets on weekends for “ciclovias” and “open streets” so their citizens can enjoy stress-free recreation and activity. I grew up in Ottawa in the 1970s going to cycle with my family along Colonel By Drive beside the Rideau Canal every summer Sunday morning, when it was always closed to cars. It’s not a new or radical idea.

Another irony is that the city has just introduced huge new swinging barriers at the entrances to the southern section of Bayview so it can be closed if the Don River floods. These would make it even easier to close Bayview to motor vehicles for ActiveTO on the weekends.

Just got home from a ride there. Sweltering day, yet packed with cyclists. Really narrow lanes to support cyclists, roller bladers, runners and walkers of different abilities and speeds. And yet…6+ lanes of roadway sat there practically empty. Madness.

That leaves, as regular weekly ActiveTO open streets, just a short stretch of Lake Shore Road East, and the roads inside High Park. The City also ended ActiveTO’s “quiet streets” program, which traffic-calmed local streets so they could be enjoyed by walkers and cyclists, with the exception of a few streets individual councillors fought for. It feels like ActiveTO is hanging on by a thread and a few kilometres.

The City is teasing other possible weekend open streets. Last weekend part of the Allen Road northbound was closed to mark the 50th anniversary of stopping the Spadina Expressway. Some cyclists and intrepid pedestrians certainly enjoyed using the opportunity.

But it was only accessible from Lawrence Avenue — a single entrance and exit — because of the Crosstown construction on Eglinton, which limited access and its appeal to people on foot. It’s not likely this closure will be repeated. The City is also floating the idea of closing Black Creek Drive and Exhibition Place, but nothing concrete has appeared.

Ciclovias and open streets programs are most successful when they’re regular and predictable, when you don’t have to check the City’s website to know if something will be available but rather just know that certain roads will be available for cycling, running, and walking at the same time every week during the summer. Cutting ActiveTO to a couple of short stretches plus irregular, unpredictable random closures is a recipe for low take-up and “data” showing it’s not being used — providing an excuse for those who say it’s not worth the bother.

The City says that it’s “actively monitoring” the active_TO@toronto.ca email address, and in fact responses to that address featured in its spring report. Councillors and the Mayor also pay attention when then get a lot of calls or emails about a particular issue. If we can’t enjoy ActiveTO, we can spend the time contacting politicians and staff to tell them we want ActiveTO to thrive and to expand, not get whittled away to nothingness.