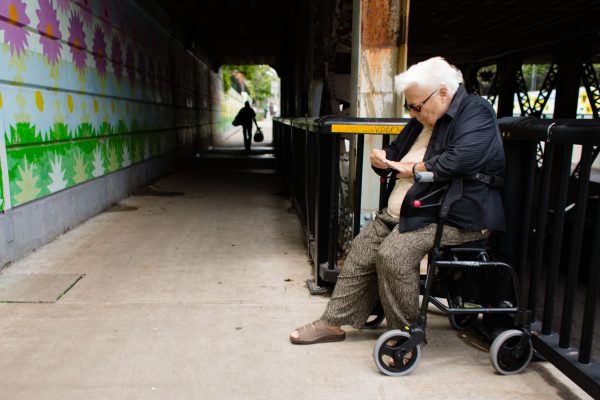 This is the fourth of a four-part series on urban oral history.

When Bart described the secret Toronto gay bars he frequented in the 1970s, Hannah created a map of them, and layered on the new safe gay spaces in the city today. When Derek described to Carlos how he repaired Toronto Transit Corporation (TTC) trains for over 50 years, Carlos researched the various iterations of train cars and asked Doug how each differed from the others. When Geoffrey shared his 1980s immigration story to Cabbagetown with Rathusa, she became intrigued by her mother’s own journey to Scarborough from Sri Lanka during the same period, and began comparing their urban versus suburban assimilation experiences. And when Nina told Angel that she spent some of her childhood years in a Japanese internment camp during the 1940s, Angel explored how Japanese Canadians rebuilt their communities after trauma.

These inter-generational relationships were formed during the global pandemic in the University of Toronto undergraduate course Qualitative Methods for Urban Studies that I taught with journalist Alexa Mills during the fall 2020 semester. Before the pandemic, students in the class would choose a public space in the City of Toronto to visit weekly and practice the various methodologies we studied from participant observation to critical mapping. Eventually the students would develop research projects about their chosen area.

This year, with COVID-19 restrictions and the classroom moving online, I needed to teach the course differently. Instead of focusing on a Toronto public space, our students befriended Toronto elders at the True Davidson Acres Home for the Aged via Skype, and in the process learned about the history of the city and themselves. The Toronto-based histories these students acquired from their elder partners were far deeper and more intimate than any lesson in an academic article or lecture.

History often repeats itself. As we navigate COVID-19, and adapt to a pandemic way of life in Toronto, local newspapers can’t help but reference the Spanish Flu of 1918. In both 1918 and 2020, media narratives blamed vulnerable populations for the spread of the virus, and in both time periods, anti-maskers against government overreach protested on city streets as businesses and schools remained closed. What would someone who lived through the Spanish Flu of 1918 teach us about Covid-19 in 2020? Few survivors of the Spanish Flu are still alive to tell their pandemic tales, but what if planners practiced the collection of oral histories more regularly?

It may be too late to collect oral histories from those who survived the Flu of 1918, but what about regularly talking to elders who have experienced recent historical urban events? In North American urban planning and studies education, students are often introduced to the field by learning about urban renewal, slum clearance, and highway construction in the 1950s. These government-sanctioned programs were not that different from the large-scale public-private social housing/mixed income redevelopment projects that have taken shape since the 1990s. Displaced social housing residents from the 1990s and beyond could benefit from the knowledge of inhabitants who were also forcibly removed in the 1950s.

City planners and scholars should harness the wisdom of older urban dwellers more often. Elders have watched the culture of streets change, buildings go up and down, social movements fail and triumph. The field of planning is focused on identifying and analyzing the factors of urban change as well as modeling the future through rigorous quantitative and qualitative empirics. While this data is important in uncovering trends and patterns, individual’s memories help us to truly understand and feel the contrasts between urban life then and now. Oral histories allow us to document evolving cultures in the city as well as the development of urban spaces and the changing meanings of those spaces.[1] Elders’ stories also provide us with important knowledge for effective physical, social, and economic policy interventions.

In our class, we learned how to connect with elders and co-produce scholarship about the city with them by drawing from different scholars, journalists, and writers. We read excerpts from anthropologist Barbara Myeroff’s classic ethnography, Number Our Days, about Jewish elders in Venice Beach, California, to understand the process of aging and the importance of ritual in this vulnerable community. Myeroff taught us how to reflect and locate ourselves within our research. Journalist John Leland intimately follows five seniors in New York City and documents how they navigate urban life with positivity and humility in his book, Happiness is A Choice You Make. We also studied the work of scholars who used oral histories in their research. For example, in the early 2000s, Vanessa Matthews interviewed visual artists of the 1960s who lived and worked in Toronto’s upscale Yorkville to better understand the relationship between art and neighborhood gentrification.[2]

To prepare for the course, I also befriended and partnered with an elder resident during the summer of 2020, before the Fall semester began. Through Skype, I had the pleasure of meeting Johnny, a 94-year old Scottish immigrant who moved to Toronto after World War II. He came here as part of a larger wave of immigration to Canada in 1945 as the country welcomed thousands of displaced individuals and refugees. Connected by a pixelated screen and my airpods, Johnny told me how he arrived in the city with seven friends and just seven dollars in his pocket. Together, this group of men rented a small one bedroom apartment in a west end boarding house.

I asked Johnny several questions about life in Toronto when he first arrived, but he was much more interested in telling me about his streetcar travels from the west to east. On Friday evenings, Johnny and his friends rode the Dundas streetcar, also known as the “red rocket tram,”[3] to his favorite Foxtrot dance club at the corner of Yonge and Dundas. It was here that he first met his late wife — “the love of my life,” as he said — and every week the two would dance until close. At the end of the night, Johnny rode the streetcar to the east end of the city to make sure his dance partner returned home safely. He would then ride the tram all the way back to the west end. “We didn’t have any type of technology to stay in touch during the week, so the street car was like my telephone,” Johnny explained during one of our conversations.

I smiled at this metaphor. Johnny’s story gave me a new appreciation for the Dundas street car, which I use frequently. Today, the red rockets have been replaced with Articulated Light Rail Vehicles, and the majority of passengers are distracted with their smartphones as they wait to arrive at their destination. Official city maps such as the ones that depict public transit lines tend to homogenize space. Oral histories and particularly stories from elders such as Johnny add depth and texture to that space.

Most importantly, these memories inspire research questions about space that can help us design and build more just, resilient, sensitive, beautiful, and playful cities for the future. After listening to Johnny’s story, I wondered what happened to his favorite Foxtrot club and what took place inside its walls. I am still investigating.

Aditi Mehta is an Assistant Professor of Urban Studies at the University of Toronto in Innis College.

[3] The President’s Conference Committee tram was invented in the United States in the 1930’s, and became popular across the world post World War II. They were introduced to Toronto in 1938.