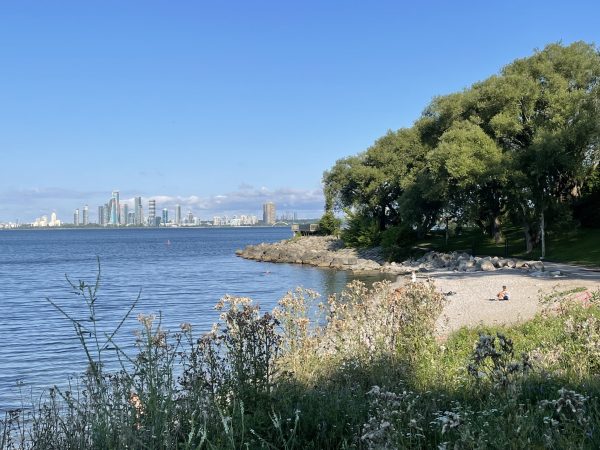 A flash of flame-orange darts over the lakeshore path, disappearing into a cluster of spruce trees. Before I’m able to scan the branches and relocate, I hear soft whistling notes overhead as two more bursts of colour land in a maple nearby.

It’s mid-May on the western tip of Ontario Place, and this is peak warbler season — a period when around 50 million birds pass over Toronto in migration, making a pit stop for food and shelter on the city shores during their journey north. The majority will continue onwards towards breeding grounds, but a couple of species will stay for the summer — the sweet notes of a Yellow Warbler are a frequent sunny morning soundtrack.

It might be surprising to know that Ontario Place is a great spot to witness all this activity.

Having evolved from its original creation in 1971, the grounds of Ontario Place have been open to the public since 2016 as an urban park. The bridge from Exhibition Place leads to a snaking waterfront trail around the futuristic floating pods, marina, willow-banked ponds, and the faux-rocky wooded West Island. In 2016, the connected Trillium Park opened — a network of trails reflecting varying provincial landscapes through rock outcrops and a pebbled shoreline. The Indigenous presence on the land is clearly interpreted through park features developed with Mississaugas of the Credit First Nation, reminding us that Toronto sits on the traditional territories of Indigenous peoples.

As a nearby resident, I’ve been walking around Ontario Place for the past several years, and almost daily over the last 18 months. As I move to Toronto in 2015, I never experienced Ontario Place in the form that holds fond nostalgia for many: the uproarious children’s village and play park, the Forum music venue, or the rides.

But my recent experiences are completely contrary to views that the site might be empty, unsalvageable, or dilapidated. At present, in all seasons, this stretch of lakeshore provides public access to the waterfront for city residents, a critical downtown green space. It has become a natural retreat in which a diversity of wildlife thrives. 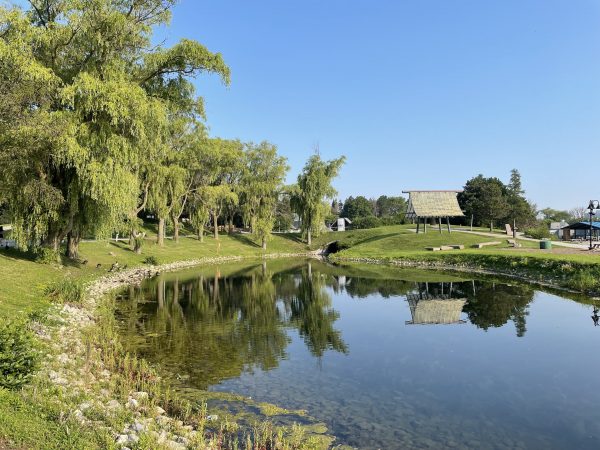 Just as Toronto’s ravines and parks represent vital natural environments, Ontario Place can provide critical habitats for mammals within an urbanized and densely populated area. They represent an important part of the ecosystem within our green spaces. Beavers and mink regularly potter around the pond perimeters. Eastern cottontails and skunks occupy the same meadow-like knoll that groundhogs appreciate grazing. A red fox might be visible trotting around at dusk, as well as the exciting, and much rarer, sighting of a silver fox last year.

Pollinators crucially speckle the greenery. Migrating monarchs are a familiar fall sight, but several other butterfly and bee species (of which there are over 350 in the GTA!) take advantage of the native plants on this man-made stretch of land, savoring the coneflowers and goldenrod.

An absolute standout here is the bird life that fills the skies, trees and water. Over the years, data from the community science site eBird has recorded over 170 species of birds. In winter, a great variety of diving ducks and migratory waterfowl are scattered around the shoreline. In spring, the West Island resounds with the trills of dozens of warblers. In summer, the sky around the Cinesphere is a spectacle of swallows. Fall is a season of sparrows and finches. Significantly, 15 species sighted are recognized on the provincial Species-at-Risk list.

The recently unveiled development plans — which include an all-year spa, an expanded performance venue, and other amenities — make no commitment for protection of habitat loss.

While Ontario Place provides a space for nature, I’ve also witnessed this area become an important venue for outdoor activities, and these have hugely increased since the pandemic hit. A warm day here sees biking, skateboarding, walking, jogging, paddle-boarding, fishing, basketball, fire pit rentals, volleyball, table tennis, picnicking, or just sitting by the lake on one of the many Muskoka chairs looking out to the water.

Increasingly swimmers are seen in the waters around the West Island. On the southern pebble beach, not only do casual swimmers cool off at Toronto’s only downtown beach, but the year-round Swim Drink Fish community take regular measurements of the water and its properties. In 2019, the beach passed water quality standards 90% of the time.

The word ‘potential’ feels synonymous with any discussion of the future of Ontario Place. I’m sharing the above observations because my personal experience underscores the importance of a special place for wildlife in a publicly accessible downtown park. Rather than a problem to be solved, the space in its current form is activated in so many ways, particularly as we’ve turned to our local green spaces more than ever. If anything, the vision of the park’s landscape architect, Michael Hough, remains as a legacy — a design grounded in ecology and community use. Areas of the West Island were designed to allow for quiet spaces of contemplation and relaxation, and throughout the pandemic it provided that critical purpose for many.

Is it radical that a potential future for this place continues to be a free park? 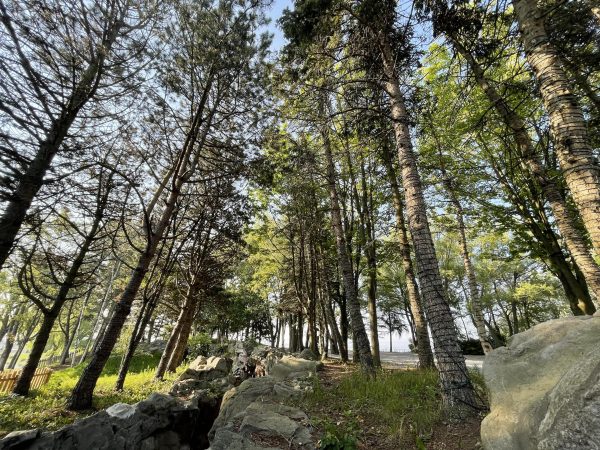 But this is only one perspective of many. Where is the public consultation and engagement in this process? The recent redevelopment plans suggest public opinion has been sought over the years in some capacity. Yet several community groups consistently advocating for transparency and have received none. Simultaneously, it was announced construction will begin later this year, at exactly the same time that public input will be invited. Too little, too late.

If there’s an interest in conserving Ontario Place as a green space that benefits public health, local ecosystems and remains openly accessible to everyone, then it’s essential for Torontonians to speak out now.

Francesca Bouaoun works in the City of Toronto museums. She is interested in urban parks and is normally out on a lakeshore trail with binoculars. Follow her on Twitter at @frantasticx