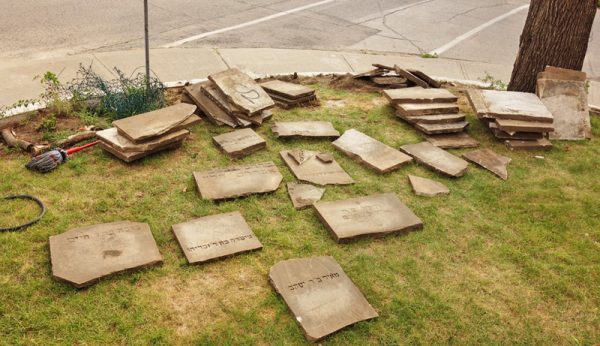 Standing outside her west end Toronto house on a sunny September morning, a cup of coffee in hand, psychotherapist and rehabilitative dance specialist Miriam Schacter planned to spend a few minutes enjoying her front garden before returning to her workday.

As Schacter glanced at the weathered flagstones her landlord had just dug up from where they bordered the lawn, something caught her eye: the faint outlines of Hebrew letters. She looked more closely. There were Hebrew inscriptions on the underside of the flagstones, hidden from view where they had lain in the soil. She was shocked. Were these Jewish gravestones?

It was a surprise to everyone. When he bought the house close to forty years ago, the landlord had no idea that there was anything unusual about the nondescript stones in the front yard. Neighbours remembered the stones being there in 1973 when they first moved in. And living in the house for eighteen years, Schacter had never given the stones a second thought.

Now, with a sense of urgency (the landlord was going to dispose of the stones and other construction debris), Schacter poured water on the inscriptions to try to remove the dirt embedded in the engraved lettering. She appealed for help on a neighbourhood Facebook page, and called her family. Drawn by a mixture of curiosity and concern that gravestones had been vandalized, a small group (I was among them) quickly gathered. The first order of the day was to clean the stones off and figure out what they were. Made of marble, they were extremely heavy, requiring two people to lift and spread them out on the lawn. One by one, the stones were hosed off and swept clean.

Out of some fifty large pieces, about half had Hebrew inscriptions, a few of these with the rounded contours along the top that are typical of Jewish gravestones. Some of the earliest lettering looked quite old, chiseled freehand, possibly in the 1920s or even earlier. Other inscriptions were more deep-cut and precise: they appeared to be sandblasted using templates, in the style of the 1930s and 40s.

Except for one stone with the family name “Kirshenboim,” all the rest had only Hebrew patronymics referencing the father’s, but not the mother’s or family’s, name. For example: Mordecai Tzvi son of Avraham HaLevi, or Tzipporah daughter of Zechariah. Many of the stones were broken, severing words or lines of text right through the middle. Some fragments had only one evocative name visible: Naftali. Shlima. Chana. One stone begins with a heartbreaking “The child Meir son of….” 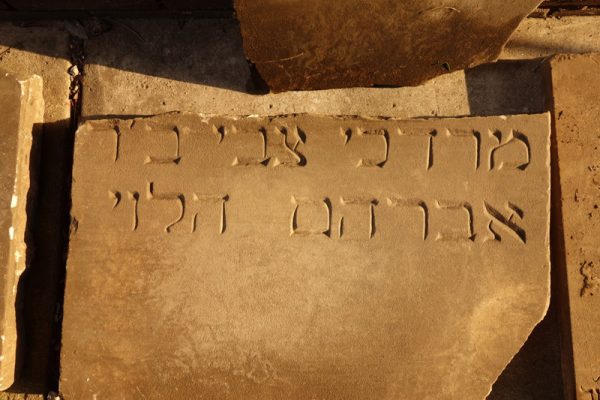 It was both moving and disturbing. Why were Jewish gravestones bordering a front yard lawn? Had there been a Jewish cemetery on the site? Built around 1903 in the area west of Bathurst Street near Harbord Collegiate, Schacter’s house was once surrounded by a Jewish community bustling with synagogues and other communal institutions and businesses.

In the 1920s and 30s, that community was mostly made up of working-class Jewish immigrants from Russia and Eastern Europe. Many were employed in the garment and related industries as tailors, pressers, button makers, buttonhole makers, and button sewers as well as cloak, cap, shoe, and corset makers. Quite a few were dry cleaners or machine operators. Others were bookbinders and printers, grocers, peddlers of various kinds, salesladies, and students.

In this era before the public provision of health care, disability benefits, unemployment insurance, and pensions, Jewish immigrants in the Bathurst-Harbord area – like many other immigrant groups – brought with them a tradition of mutual aid associations that helped to fill the gap.

Members of “sick benefits” societies, for example, contributed regular fees that were pooled and used by individual members who could not otherwise afford medical care. Bikur holim groups visited people who were ill, and looked after seniors. Landsmanshaften (groups of people from the same hometown or region) helped each other to find work and housing. Volunteer burial societies (hevra kadisha) ensured that the bodies of the deceased were prepared for burial according to Jewish tradition. Like synagogues, many of these groups also provided cemetery plots for their members.

The Bathurst-Harbord community had its choice of synagogues within walking distance. But unlike some churches, synagogues do not have graveyards attached. And there is no historical record of a Jewish cemetery in the Bathurst-Harbord area or anywhere in Toronto’s downtown. Traditionally, Jewish cemeteries are located outside city boundaries. Indeed, the city’s earliest Jewish cemeteries, established on Pape Avenue in 1849 and Jones Avenue in 1883, were located far away in what was then the rural eastern outskirts of the city.

So how did the stones get to Schacter’s front yard? Sadly, old Jewish cemeteries have been destroyed and the gravestones used as construction material to build roads, sidewalks, and walls in many places including Poland, Germany, Belarus, Galicia, and Greece. A couple of years ago, the BBC described Prague as “the European capital cobbled with Jewish gravestones.” This history is what came to mind as we went from stone to stone, deciphering the inscriptions, trying to piece together the fragments and puzzle out the larger story.

But there is another possibility entirely. What if the flagstones on Schacter’s lawn were never actually used as gravestones? After all, aside from names, they have none of the typical features of Jewish gravestones such as dates and the Hebrew letters peh and nun (for po nikbar, here lies), for example. Were these rejects or first drafts of gravestones, abandoned because the mason made a mistake when engraving the names?

Howard Goldstein, Coordinator of the Jewish Genealogical Society Toronto Cemetery Project, believes that the missing elements are evidence that the stones are not desecrated headstones taken from a cemetery gravesite. Rather, he suggests that they might be what he calls “practice stones” used by the mason “to prepare for engraving the ‘real’ stone.”

Akiva Balter, a memorialist (he helps families design headstones) with Yad Vashem/Landmark Monuments, agrees that the stones appear to be gravestones that were not completed, and were never placed at a gravesite. At the same time, he does not think they were engraved just for practice. “There’s no doubt in my mind,” says Balter, “that these are real names of real people.”

With forty years of experience in this field, Balter has his own theory as to why a gravestone might have only a name engraved and nothing else. He explains that sometimes individuals have asked him to inscribe their names on headstones in advance. This can happen because they don’t have any family members to whom they can entrust the task; or they prefer to decide for themselves how their headstones will look. Balter stores the future headstones, and then, when the time comes, he adds the peh nun, along with the deceased person’s dates of birth and death and other elements, before the monument is placed at the gravesite.

Could this be why the headstones on Schacter’s lawn were unfinished? Perhaps people who had hired a stonemason to prepare headstones with just their names, awaiting future use, did not keep a record of their decision. After they died, because nobody else knew about the partially prepared gravestones, entirely new monuments were crafted. Maybe the stonemason, unaware, continued to store the stones, year after year, until he was gone too. At that point, whoever took the stones or disposed of them either didn’t realize what they were, or didn’t care. We will likely never know for sure.

Trying to make sense of these gravestones, to understand what they are and where they came from, has been a pointed lesson in the transience of urban and ethnic history in Toronto, a city where the pace of change seems to eradicate almost every trace of the past. In the post-Second World War era, the Jewish community began its trek away from the urban hubbub to a quieter life in the suburbs. Apart from four small downtown synagogues still operating (two of them in Kensington Market), the Miles Nadal JCC, and the venerable Harbord Bakery, there are few tangible reminders left of this community’s former presence. Even Kensington Market, once known as “the Jewish market,” has reinvented itself.

A few years ago, the charming 70-year-old hand-painted sign for Mandel’s Creamery on Baldwin Street, advertising “Butter, Cheese, Cream, Eggs – Fresh Every Day” in a mixture of Yiddish and English, was removed for preservation at the Ontario Jewish Archives. Walking through the neighbourhood streets, here and there one occasionally catches a glimpse of an old mezuzah on a doorpost, or very rarely, a forgotten Hebrew sign or cornerstone that has survived against the odds. With this part of Toronto’s history steadily fading out of view, it is no wonder that our encounter with these half-finished gravestones – poignant remnants of a neighbourhood’s lost Jewish past – made such a deep impression.

POST-SCRIPT: It is hard to say what will happen to the stones next. Local archives are not equipped to take them; nor are synagogues. A number of ideas have been floated, from burial in a Jewish cemetery, to looking for the descendants of those named in the inscriptions, or even seeking proposals from artists. For now, the stones remain safe, their future as much a mystery as their past.