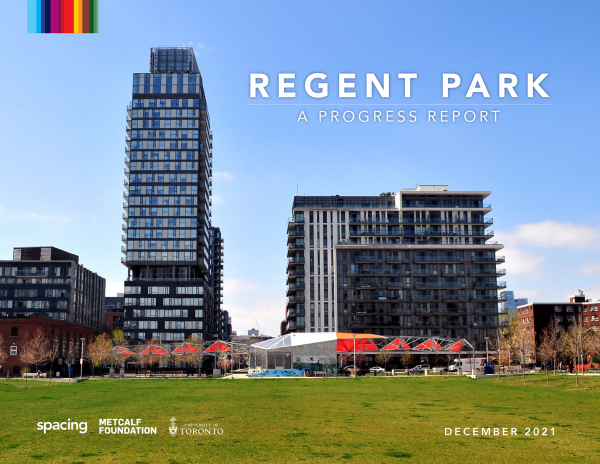 Beginning this week, Toronto Community Housing Corp. (TCHC) and Tridel formally commence a public consultation process that marks the beginning of the final two phases of the Regent Park revitalization — a stretch extending east along the south side of Gerrard Street between Parliament and River streets. Once finished, it will mark the completion of the redevelopment of one of the largest public housing complexes in Canada.

According to the project’s new website, the re-zoning application, site plan applications and building permit issuances will take over three years. The first virtual consultation session will take place tomorrow at 6:30pm. TCHC and Tridel (selected as the new development partner following a tendering process in 2019-2020) are expected to be seeking increased densities for phases 4 and 5, which will include a mix of public, affordable and market units.

To provide context for what’s coming next, Spacing, in partnership with the Metcalf Foundation and the University of Toronto, is releasing today a detailed examination of the revitalization to date. The project, which traces back to resident demands for improved housing in the late 1990s, was first approved in 2002, with re-development beginning in 2006.

Built in the late 1940s and 1950s, the 69-acre public housing project was originally intended to replace an enclave of rundown rowhouses considered by the city to be a slum. Over the years, the combination of neglect, crime, systemic racism, media stigmatization and antagonistic treatment by Toronto Police isolated Regent Park’s residents. But grassroots community organizations pushed for improvements, setting in motion a project that has cost over $1.5 billion to date. Originally, the revitalization was meant to be self-financing, with sales of new market units covering the cost of replacing TCHC’s subsidized apartments. But delays and flaws in the business model have led to shortfalls that the City must cover.

In partnership with the City and TCHC, the project’s first developer, Daniels Corp., set out to create an inclusive mixed-income community fitted out with new public amenities, retail and improved connections to the rest of the downtown’s east side. While the new Regent Park includes all of these features, the project has been dogged by politics, delays, bureaucratic uncertainty, and a shifting policy environment. TCHC initially asked Daniels to carry out the whole venture, but the City decided to re-tender the final two phases in 2018, with Tridel selected as the winner in December, 2020.

The project team was supported by a community advisory committee, which included both residents and representatives of local agencies. The report itself draws on publicly available staff reports and other official data sources, previously published academic research on Regent Park, and confidential interviews with 23 Regent Park residents (both TCHC and market housing), local social service agency representatives, and officials with TCHC, Daniels, the City of Toronto and development firms. The research was conducted with approval from the University of Toronto’s Research Ethics Board.

Members of the advisory committee and two U of T reviewers generously provided critical feedback on preliminary drafts. Lorinc, who served as the writer, assumes responsibility for any factual errors in the final version.

Correction: An earlier version contained inaccurate information about The Daniels Corporation’s response to the RFP for phases 4 & 5. It has been removed.