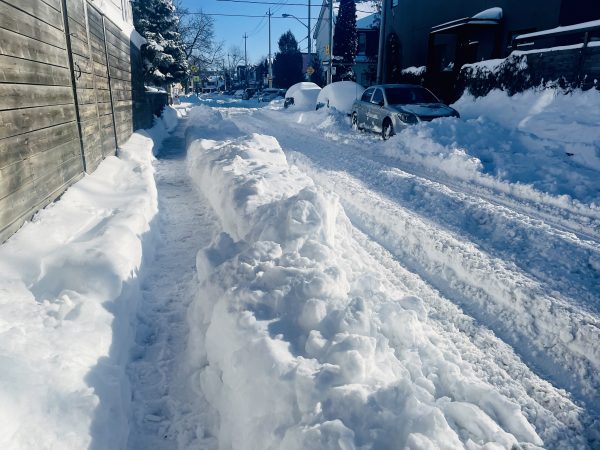 A question for the immediate aftermath of the heaviest snowstorm in ten years: Following years of resident complaints and half-hearted lobbying from downtown councillors, the City of Toronto last year approved sidewalk snow shovelling for the older core neighbourhoods. Has it worked, or is this another example of the old adage, that one should beware of what one wishes for?

Anticipating one obvious response, it is not too soon to ask this question. The hours after a huge storm are precisely when the sidewalks need to be cleared, and the City’s standard (and understandable) pleas for patience are not consonant with the realities of moving around in a foot and a half of heavy-ish powder.

My entirely non-scientific observation is that about half the sidewalks on residential side streets were shovelled by late Monday afternoon, and that figure had risen to probably 90% by Tuesday morning.

How much due to the work of the guys driving those cute little snow plows? Who knows, but I have to say I’ve seen little evidence of this service in my part of the city.

So how come all the sidewalks are shovelled? The blindingly obvious answer, of course, is that most homeowners didn’t wait. They did what they’ve always done, which is to hold off until the storm ebbs, get their shovels out, and begin digging.

Before I continue, let me acknowledge the full range of human behaviour — from heroic public-mindedness to loathsome selfishness — when it comes to clearing sidewalks.

There are the people who will get going while it’s still blizzarding, and those hail-fellow characters with new Christmas snowblowers who take it upon themselves to clear out half a block on either side of their property, just to be neighbourly.

Then there are the minimalists — the one-shovel-wide-pathway folks — as well as the people who like it really tidy and the ones who leave ragged edges.

On the other side, the ones you curse at — the self-involved schmucks who dig out their front walk, the path to the driveway, and the entrance to said driveway, but leave the rest of the sidewalk covered. Or the snowbirds who’ve abandoned the city for points south and didn’t bother making arrangements.

Finally, there are all the city-dwellers for whom shovelling is genuinely too hard — older people without nearby family or considerate neighbours, people with disabilities, people with heart conditions, and so on.

But with the new plowing policy, we potentially have one more category of non-shovelers: those who decided to wait until the Bobcats and Kubotas come through, because, you know, that’s what the City has promised and that’s what I’m paying for.

It’s surely tempting, when picking through the streets after a blizzard like this one, to wonder how many of the uncleared walks belong to this new group. My guess: hardly any. After all, shovelling the sidewalk, for most people, isn’t an act of altruism; it’s a practical solution to getting around when there’s an abundance snow.

The new service, in other words, has create a weird, and perhaps unanticipated, civic riddle: do I wait for the plows, or simply do what I’ve always done and clear away the snow?

Most people, I’d predict, probably chose what’s behind door number two, and will then find themselves pondering the oddness of this new service when the plow does come through, a few days hence, clearing already cleared sidewalks.

The absence of downtown sidewalk plowing traces back to a Faustian bargain negotiated by the amalgamated council’s first budget chief Tom Jakobek, who was trading horses and favours with the suburban councillors.

But this story was never just about suburban-vs-downtown service levels. The variability of sidewalk widths, plus the proliferation of odd-ball obstacles in older neighbourhoods, made it genuinely more difficult to deliver the service. Then there’s the issue of street-parking, which means that plows have to thread the needle along narrow sidewalks without stripping the paint off now buried vehicles. The smaller vehicle the City has acquired can deal with most of these impediments, but I have definitely seen tire-track evidence of veering and dodging.

It may be the case that we’ve now entered a period of transition, when homeowners allow the old habits to die while waiting for the new service to deliver on its promise. But I doubt that the story will play out this way. Most people will continue to shovel their walks.

For the City, this problem raises an important question, which has to do with opportunity costs. If council has approved funds for sidewalk snow plowing downtown, and most people don’t bother waiting for the plow, it surely makes sense for the resources and the equipment to be used more effectively.

Lots of examples spring to mind: better clearing at corners, where the quasi-public realm of the sidewalk in front of a house bleeds into the fully public realm of the street. Prioritizing bike lane snow removal. Providing more timely service for seniors. Or targeting all those places which don’t seem to be anybody’s responsibility, of which there’s a long list.

The pandemic adds one more layer: since so many people have begun to walk more, and further, it seems to me that the City’s sidewalk plowing should be about ensuring connectivity and accessibility as opposed to relieving homeowners of a chore most will do one way or the other.

Again, none of these questions are coming up too soon. The City will never plow enough resources into plowing to ensure that the residential sidewalks are shovelled in a timely way, and the weather of the past two days is proof. There are better ways to clear the path.