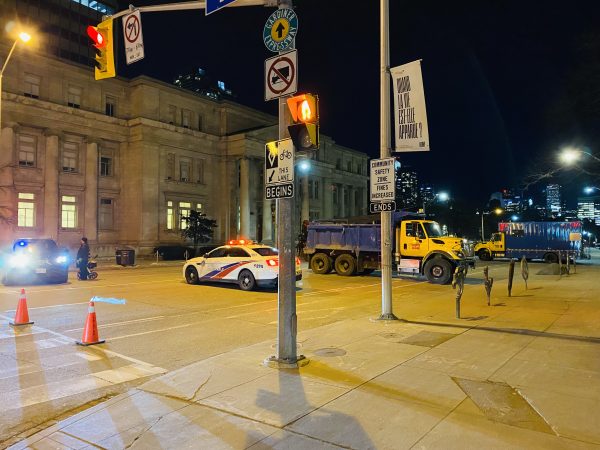 Like many angry and aghast Canadians, I felt deep satisfaction this past weekend watching the images of ordinary Ottawa residents blocking the route of a convoy with nothing but their bodies and a few bikes. As word spread online, their ranks grew and gradually they had surrounded those flag-toting pick-ups, whose occupants were suddenly feeling less, well, free.

I’d be lying if I didn’t also confess to thrilling at the vague suggestion of menace in that frigid encounter. There was no violence, not even a keying. But revenge, as Truman Capote once wrote, is best served cold, and there was an unmistakable chilliness on that road, a sense from these demonstrators that matters finally had to be taken into their own hands.

In a city chock-a-block with institutions, the institutional failure in Ottawa these past three weeks has been a thing to behold. I feel absolutely certain that once this invasion has been cleared away, there will be a painful reckoning about what went wrong, and why the residents of a G-7 capital had to resort to the mildest form of vigilanteeism to restore sanity.

Which, for today, is not my topic, as I’d like to focus on one thing that went right, albeit not in Ottawa. As Torontonians well know, the preemptive actions by the Toronto Police Service and the City to prevent the kind of entrenchment we’ve seen in Ottawa proved to be highly effective — focused, as they were on buffering the hospital precinct so it wasn’t overrun by blaring trucks.

The operation, which turned on closing off vehicular access to University Ave. and ensuring that protesters weren’t staying the night, didn’t require huge numbers of back-up officers. Rather, the unsung heroes in our story included the garbage trucks, salt trucks and TTC buses that city and police officials placed across the major arterial roads leading towards the area.

Given all the Monday-morning quarter-backing that will take place in the coming months, it’s worth noting the antecedents to this tactical use of municipal vehicles.

In the past several years, there’s been a growing industry dedicated to figuring out how to harden perimeters, to use spook-talk, in more discrete ways than the heavy bollards that have protected the U.S. consulate on University for decades. A couple of years ago, I wrote a story about this trend, which explored the world of “crime prevention through environmental design” (CPTED). There are whole industries that have sprung up in this space, from high-tech bollards to specialized landscaping that obstructs movement or conceals barriers.

The field springs from the world of counter-terrorism, but also sought to respond to the growing incidence of the use of weaponized vehicles in crowded urban spaces, including, tragically, the Yonge Street van attack in 2018, the worst mass murder in the city’s history.

In the aftermath, the city began the practice of parking large municipal vehicles at vulnerable locations where large crowds were congregating in public spaces like Nathan Phillips Square (the city also places concrete blocks and jersey barriers to prevent attacks).

Meanwhile, council and the TPS, as in many cities, have been grappling with the challenge of deescalation, particularly in situations where law enforcement officials have been called in to deal with emotionally distressed people.

I use the term “grappling” because the record is a mixed bag, as we saw with the violence inflicted on the homeless residents of park encampments last summer by both the police and City-hired private security squads. On the other hand, council recently approved a plan to establish an emergency service outside the TPS that is specifically mandated to respond to distressed individuals — a deescalation strategy that’s been strongly recommended by numerous studies, including one by former Supreme Court justice Frank Iacobucci.

I have no particular insight about whether the city and the police have linked the deescalation conversation with these new tactics for crowd-protection. Yet what’s clear today is that the use of large municipal vehicles to block access is a highly effective deescalation strategy. Unlike lines of bulky cops, they don’t generate crowd energy. They make no eye contact, their allegiances aren’t called into question, they pose no threat. They simply prevent the movement of vehicles, and thus ensure that protesters are doing only that: protesting, as is their right.

There’s an important municipal angle here as well. These are city vehicles, not police vehicles. The City owns them and controls their use. And, critically, the City has the exclusive right to manage the right-of-way. While we’ve heard the tedious mantra/excuse about politicians not directing police way too often in the past two weeks, the jurisdictional reality is that the City has extensive authority over public space. In Toronto, it was exercised surgically and well, such that no one was deprived of their fundamental rights, but no one was hurt, either.

I remain utterly mystified as to why the City of Ottawa didn’t leverage its own ability to limit access to public rights of way, or to find excuses — potholes! manhole maintenance! gas line inspections! — to close off neighbourhood streets or block the routes that the protesters and their pick-up trucks have used to link supply depots to the main stage near Parliament Hill.

None of this called for a massive contingent of reinforcements, which is what Ottawa Police Chief Peter Sloly has been saying for the past two weeks. Rather, it required both the OPS and the municipality to make maximal use of all the jurisdictional tools they had at their disposal, including the tactical placement of garbage trucks, buses and jersey barriers.

In this grim moment, it’s yet another reason to celebrate waste management and transit.