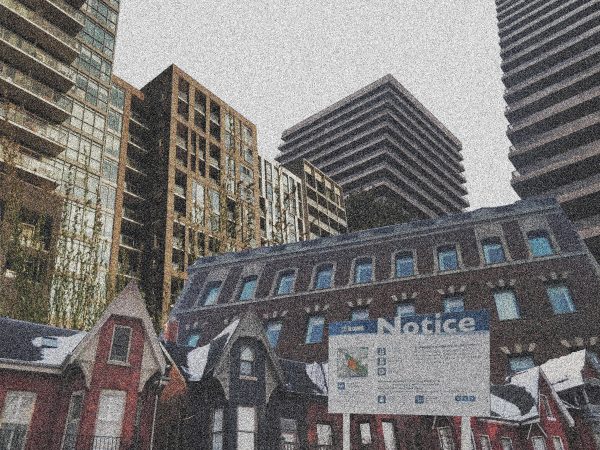 This February, the Ontario Housing Affordability Task Force released its report, which, without irony, stated that “Affordable housing (units provided at below-market rates with government support) was not part of our mandate.” Released after only two months of consultation with stakeholder groups, the task force report was commissioned by the Provincial government in December 2021 as part of More Homes, More Choice: Ontario’s Housing Supply Action Plan to provide recommendations to increase the supply, variety, and affordability of market housing in Ontario. Setting a goal to add 1.5 million homes over the next 10 years, the report lays out 55 recommendations aimed at “cutting red tape” in planning approvals,  tackling NIMBYism, increasing density, and standardizing urban design rules.

On March 30th, Municipal Affairs and Housing Minister Steve Clark tabled Bill 109 “More Homes for Everyone” (full text here). The bill incorporates many of the task force recommendations while omitting those proposing increased density. The bill also includes language on the provision and protection of community housing, and adds modest anti-speculation measures.

As architectural workers involved in the production of housing, we are concerned that the report — which serves as a roadmap for Bill 109 and other future housing legislation — fails to propose holistic solutions to the problem of equitable access to affordable housing. While the report rightly recognizes a housing emergency in Ontario, and some of its recommendations are necessary and welcome to housing advocates, many others warrant closer scrutiny. We have three main concerns with its overall premise, and the direction of its recommendations, detailed below.

The report proposes multiple recommendations aimed at reducing “red tape” and providing more power to private developers to build housing. While we commend steps to address inefficiencies in approvals processes (e.g. #26, #31, and #50), we are concerned about the report’s emphasis on limiting local community engagement (#13-15).

The report’s recommendations on providing more power to developers to override local opposition, ostensibly to combat NIMBYism (Not In My Backyard), are concerning. Rooted in the idea that land should be for private profit and enjoyment, NIMBYism is both a cause and a symptom of the housing crisis. Dominating NIMBY voices drown out marginalized voices advocating for affordable housing. However, the report conflates NIMBYism with all community involvement, flattening important local differences in power, wealth, and reasons for opposition to development.

Perhaps another reason for obstructionism is because residents have observed that the “community consultation” process is essentially meaningless. When community meetings take place, basic decisions, including crucial decisions on affordability, are already finalized. We agree, affordable housing cannot continue to be a contingent outcome of the “politicization of individual housing projects” (page 13). To that effect, we need official plans that meaningfully include marginalized voices, and that have stronger, more enforceable policies to make space for affordable housing from the outset.  In Ontario’s cities, many grassroots groups – representing BIPOC, disabled, and senior populations – are rising to advocate for more affordable housing. Instead of reducing or overriding local involvement, as the report suggests in recommendation 18, governments, developers, and citizens need to meaningfully listen.

However, besides providing modest additional funds for Indigenous supportive housing, and encouraging “innovative pathways to homeownership,” the report and Bill 109 largely punt responsibility for addressing housing affordability for Black and Indigenous communities to the federal government (recommendation 36). Prioritizing ownership to solve a crisis rooted in racism and colonialism sidelines necessary discussions on who ‘owns’ land, the real value of reparations needed to address land theft, and how we can radically re-envision our relations to land and housing to enable decolonization.

Lastly, recommendations 16-17, which aim to remove obstruction to development due to heritage designations, are also concerning. While some municipalities have used heritage preservation to restrict densification, we believe that the real picture is more complex than that of obstructionist homeowners pitted against the developer who just wants to build. Heritage can be an important tool to protect existing affordable housing, culturally important small businesses, and other buildings from gentrification. This is especially true for Black and Indigenous communities that don’t have ownership or other control over neighbourhood spaces. Similarly, recommendation 12c would grant the province power over local zoning, putting Ontario’s many diverse communities at risk from tabula-rasa re-development. Completely removing the means for communities to react protectively to any development, especially in projects with no designated affordable commercial space or housing, would accelerate the displacement of many of Ontario’s already-marginalized communities.

Supply (alone) is not enough

The task force report frames the housing emergency as a crisis of supply, stating that “there just isn’t enough housing… Scarcity breeds price increases” (Page 7). To combat this, many of the report’s recommendations are aimed at mandating and incentivizing the construction of new homes and condominium units, with rental apartments and other forms of tenure included largely as afterthoughts.

While we welcome the recommendations that end exclusive single-family zoning in many residential neighbourhoods (#3), we are skeptical of who benefits from increased laissez-faire development, and who is left out. Toronto’s thousands of new condos did not help the 132 people who died in Toronto’s shelter system alone in 2021, with the total number of unhoused persons who died believed to be much higher.

The report grounds its focus on maximizing new market-rate housing in trickle-down economic theory . There is a lack of empirical evidence proving that increased supply leads directly to lowered housing costs. While more research is required, emerging academic studies of the local effects of “up-zoning”  in New York and Chicago neighbourhoods, and data from other major American Cities show that increasing density results primarily in supply at the high end of the market, along with higher rents, in the immediate term.

Similar patterns can be seen in Toronto: for example, gentrification is underway along the east and west of Eglinton Ave, following publication of the EglintonConnects study recommending increased density along the new LRT corridor. As to adding “missing middle” (#2) density in or near wealthier yellow-zoned areas that are by definition immune to gentrification (e.g. Rosedale) — it is unlikely that this can produce enough units affordable to the average Torontonian anytime soon.

Further, while housing construction has outpaced population growth in the past decades in Ontario, investors have purchased much of the new supply,  flipping or renting out new housing at market rates, inflating prices. Today, nearly 40% of new condos in Toronto are investor-owned, and multi-property owners now comprise the largest segment of home buyers. A singular focus on increasing supply, without restrictions on speculation, perpetuates the role of housing as a means of value extraction (for those who can afford it),  deepening inequality between owners and renters.

Buried in an appendix, the report ultimately concedes that purely maximizing new market rate construction is not enough to solve the crisis. It proposes recommendations 27a and 42, which would remove barriers to building and to the incentivizing of new non-profit and public housing development. Similar measures in Bill 109 and the province’s existing community housing renewal strategy are also good first steps to better house the province’s most vulnerable citizens. Public housing is an important tool in maintaining equitable housing access. Providing an affordable and high quality alternative to market housing can help to cool inflated rents and set a higher standard for housing

However, we need more resources. There are nearly 80,000 households on Toronto Community Housing Corporation’s waiting list, and a $800 million hole in the city’s 10-year capital budget for public housing development under TCHC and the Housing Secretariat. The province can also provide support for the conversion, retrofitting, expropriation, or pre-emption of existing units, to expand affordable housing supply without constructing anew. As evidenced by CMHC’s history in expanding public housing, and its support of co-operative housing, governments can and must invest more to increase our stock of truly affordable housing.

The report recognizes the crucial lack of rental supply, and yet proposes no recommendations on preserving our current stock of affordable purpose-built rentals (PBRs). This is worrying, as financialized landlords like REITS now own, develop, and operate an increasing share of PBRs. REITs have acquired many of Ontario’s older high-rise apartment towers, preventing any “filtering” effect that YIMBYists often cite as a means to affordability. To fulfill profit-driven mandates, REITS often systematically increase rents through tenant turnover and reduced maintenance, or prioritize attracting wealthier tenants. The dearth of stable, affordable rentals affects low-income and racialized households the most. Racialized tenants are nearly three times more likely than white tenants to be living in overcrowded and inadequate conditions.  Therefore, measures like vacancy control, rent control on new units, and stronger regulations on rental replacement are necessary to protect the affordability of our existing rental supply, and ensure that new rental construction is affordable to those most in need. We need more equitable and realistic solutions, that include everyone who can’t afford to shop for new housing.

To maximize new supply, the report also includes a number of recommendations aimed at enabling as-of-right development and removing what the authors consider extraneous design or planning requirements (recommendation 8, 9, and 12). As architectural workers concerned with the physical quality of housing, we worry about the impacts of these recommendations, particularly on unit sizes and environmental quality.

Families with children are finding it increasingly expensive to live in Ontario cities. In Toronto, unit sizes in new developments have steadily declined over years, as these smaller-sized units present less risk for both investors and developers. The result is less choice in housing for larger households, posing a great challenge to young families. Therefore, recommendation 7 of the report, which aims to “increase density in areas with excess school capacity,” lacks a crucial detail: we need to ensure that there is also increased density of affordable units of the types that Ontario families most need. Without addressing the profit motives on the demand side, we will see more micro-condos designed to cater to the investor market and maximize developer profit, rather than meet the physical needs of diverse, growing households.

Falling glass and windowless bedrooms have become a staple of local Toronto news. We are skeptical that recommendations such as #12d, which aims to remove design requirements on materials and maximum floor plate sizes, can solve existing concerns with building quality. We believe form follows finance: the windowless bedrooms are a result of long, narrow layouts rising from the imperative to maximize the number of sellable units in a building, and that the prevalence of window walls (and falling glass) results from a desire for economy and speed of construction rather than quality.

We can do better

The Ontario Housing Affordability Task Force fails to propose holistic, equitable solutions to the housing crisis in its recent report. Its recommendations perpetuate the notion that the housing crisis is simply the result of a lack of new supply, further increases developer power to the detriment of local communities, and has questionable implications for housing quality.

The report rightly states that “affordable housing is a societal responsibility” — one that used to be a crucial part of governing – but offers few insights into how our collective institutions can fulfill that responsibility. Ontario can do better. In the leadup to this year’s provincial election, voters should be putting pressure on all parties to come up with more ambitious housing policy.  We need a holistic and equitable solution to the affordable housing crisis, rather than the oversimplified, developer-driven model that the Ontario Housing Affordability Task Force proposes. We need to ensure that the need to provide affordable, quality housing for all Ontarians forms the basis of all future housing policy.