By Brian Doucet and Michael Doucet

This excerpt is adapted from Streetcars and the Shifting Geographies of Toronto: a visual analysis of change, by Brian and Michael Doucet, published by the University of Toronto Press. Copies of the book can be ordered directly from the Spacing Store

Toronto is constantly changing. It is now the fourth-largest city in North America, and the Greater Toronto Area (GTA) has ranked as one of North America’s fastest-growing regions for decades. Toronto, for many years English Canada’s primary manufacturing city, has over the past five decades become one of the world’s major financial hubs. Waves of immigration have transformed Toronto, once predominantly white and British, into one of the most multicultural cities on earth. Shifting ideas about planning, design and policy have influenced how communities, neighbourhoods and urban space have changed. Fifty years ago, Toronto was a predominantly middle-class, middle-income city, with most poverty concentrated within its urban core; today, the city is highly polarized and unequal, with both growing affluence and poverty, while those same inner-city neighbourhoods have become gentrified and expensive.

This book is one of many that has attempted to document, interpret, and analyse these long-term trends. However, unlike most scholarly studies, ours does not rely primarily on statistics, policy analysis or interviews. Instead, our research centres on the visual: what these changes look like in ordinary, everyday spaces of the city and what visual changes tell us about social, spatial and economic shifts. Our enquiry begins with the question of how we can visualize these major transformations as well as the forces of change that shape them.

To search for visual images to do this, we could delve into the city’s official archives, or look through old newspapers. However, these pictures were often tinted with particular social or political objectives and do not necessarily cover all aspects of the city. Instead, we have turned to an unlikely, albeit quintessentially Toronto, resource: photographs taken by streetcar enthusiasts. At first glance, photos of old trolleys may seem of little use to academic researchers interested in topics such as deindustrialization, gentrification and world city formation. Streetcars are inherently part of Toronto’s landscape the way they are in no other North American city. As Toronto Star columnist Christopher Hume has stated: “No representation of Toronto is complete without one.”

However, these images contain much more than just the streetcars themselves. The photos taken by streetcar enthusiasts offer us a rich and unique perspective of ordinary, day-to-day spaces in Toronto. They provide windows into the everyday city that help us to understand changing urban form and morphologies, land-use, spatial patterns, planning ideas, economic trends and social relations. They offer new insights for a robust analysis and interpretation of the city.

On their own, these images present us with a historical story of what Toronto used to be like. However, when these old photographs are brought into current conversations, they become highly relevant for contemporary planning, policy and political debates. To do this, we use a practice called repeat photography, which involves rephotographing images at different moments in time. Repeat photography has its origins in the natural sciences, where it has been used to study, among other things, glacial, geological, or vegetation changes over many decades, but it is an approach that is also used by a growing number of social scientists to examine urban change. We have travelled throughout the city with copies of these old images in hand, gone to the same places where streetcar enthusiasts took their photos over fifty years ago, and rephotographed the same scenes they did. These “before and after” views then act as the starting point, or “data set” for a visual analysis of change.

Simply looking at these before-and-after pictures, it can be easy to conclude that change is a natural progression, part of the organic evolution and development of cities. However, as critical urban scholars, we argue that there is nothing natural or inevitable about the changes that have taken place in Toronto over the past decades. The visual manifestations of change (or lack thereof) in the urban landscape are the product of economic shifts, political choices, social transformation and planning decisions. In other words, they are the outcomes of the wider political economy of the city.

There is a growing interest in both visual methodologies as a tool for interpreting the complexities of the city and the need to better understand long-term changes that shape urban space. Visual analysis plays a key role in critical urban planning: exposing injustices and inequalities in urban space, politicizing the geographies of the everyday city and proposing a more socially just and equitable future. Photography contributes towards this critical urban scholarship by rendering visible what is often invisible, by revealing fine-grained detail and in sparking new questions and ways of looking at the city.

Our book uses this approach to examine long-term changes in Toronto to help interpret the uneven nature of its growth, development and change. Here photography is more than an appendage to illustrate a main point or finding: it plays a central role in the analysis.

Downtown is where Toronto’s transition towards a major global city is most striking. This is vividly evident in the changing skyline, particularly around the Financial District. The landscapes in and around downtown clearly point to the emergence of Toronto as a major centre of global finance, as well as the tremendous boom in condominium construction.

But going deeper into these photos reveals other trends. Not only are the bank towers growing in height, but the financial district is also spreading outward as well. In the 1960s, going just a block or two away from King and Bay transported you to another type of economy activity entirely: newspaper offices, warehouses, parking-lots, mid-range hotels. Beyond the Financial District, surface parking lots, which once dotted the downtown, have become endangered species, often replaced by new high-rise residential and office towers. 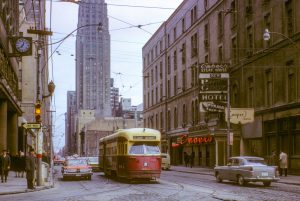 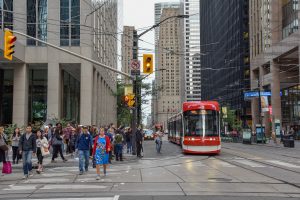 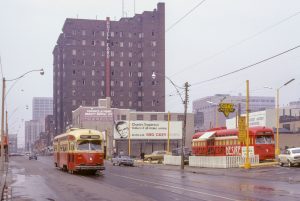 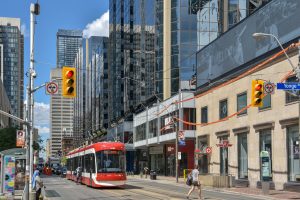 In the 1960s, Toronto, particularly its urban core, was dominated by industry. The streetcar network ran through many industrial sections of the city. Factories, warehouses and railway yards were not only clustered along the waterfront and the railway lines that radiated from the downtown core; they were also scattered throughout all but the wealthiest neighbourhoods. One of the largest factories was the Massey Ferguson complex on King Street West, which produced farm equipment. In the northwest corner of the city, the stockyards district at St. Clair and Keele was home to a large cluster of slaughterhouses and meat-packing plants.

What is remarkable when looking at these locations today is the extent to which these manufacturing activities (and to a lesser extent their industrial buildings) have disappeared from the city’s urban core. Toronto’s formerly industrial spaces have been transformed into new residential developments, primarily in the form of high-rise condominiums. When people speak of the condominiumization of Toronto, it is in these old industrial spaces, rather than in adjacent residential neighbourhoods, where this trend is most visible. 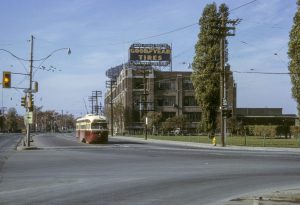 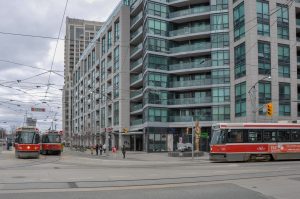 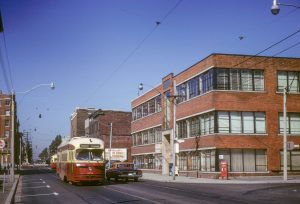 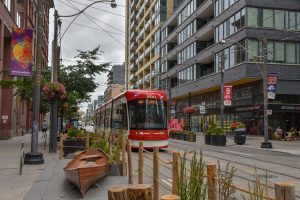 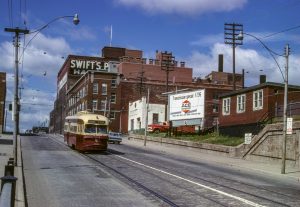 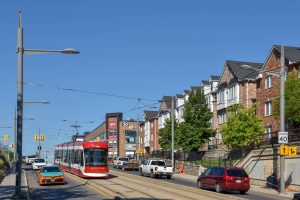 In Toronto’s urban neighbourhoods, main streets still consist predominantly of two- and three-storey buildings, with shops and retail on the ground floor, and apartments above. On the surrounding residential streets, the same houses remain. This “stability” is evident through a lack of physical change in land use, density and urban morphology. The political pressure to maintain the character of these neighbourhoods of detached and semi-detached houses is a major contributor towards the glacial pace of physical change that limits opportunities for intensification or increased density. As a result, in large parts of Toronto, the population is decreasing, despite being at the heart of Canada’s largest city.

However, this stability in the built environment belies the dramatic social changes taking place within these buildings, where gentrification is the dominant trend. Houses that were occupied by the factory workers employed in the adjacent industrial districts, or were the first entry points for newcomers to Canada, are today, increasingly home to affluent, well-educated, professional households. Amenities, likewise, have also gone upmarket, focusing more on leisure and entertainment (i.e. cafes and restaurants) than the necessities of daily life. 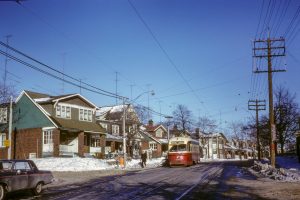 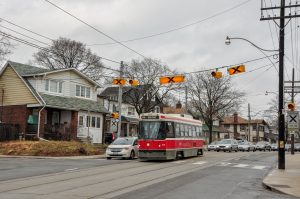 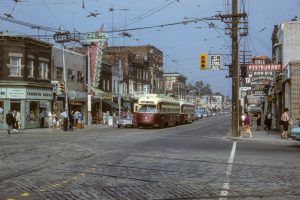 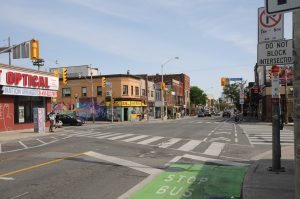