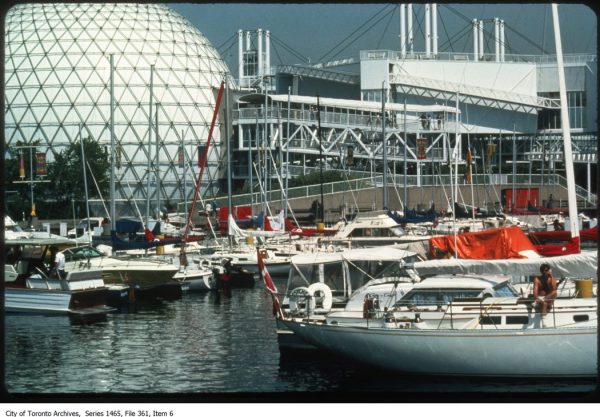 On a gusty warm Sunday in September, I enjoyed a bit of paradise at the edge of Toronto. I know: Toronto and paradise, not exactly synonymous, right? Perhaps that’s because not enough people know about how gorgeous — and threatened — Ontario Place is.

Lake Ontario is frisky, and my friend and I bob in the waves. She’s had a terrible day. I’ve had a terrible day. The water rejuvenates us. A cormorant floats nearby, dives, surfaces with a treat in its beak. To the east is the wooded shore of Hanlan’s Point. Behind us are the majestic trees of Ontario Place’s West Island. For those of you who don’t have a cottage (I mean, I’m not the premier or the mayor), this is how we get our intoxicating dose of nature.

As we cycle out of Ontario Place, past birders and runners and people doing downward dog or just walking their dogs, I tell my friend that this paradise will soon be lost. Under the Ontario government’s plans, announced in summer 2021 while the province was pandemic-distracted, a majority of Ontario Place will soon be turned from park to private enterprise. The main part of the West Island will be leased to the Austrian company Therme Group, to build a huge fee-charging spa. The concert promoter Live Nation is planning to expand the footprint of the existing Budweiser stage. The final private partner, Quebec’s Écorécréo, recently pulled out of plans to build an adventure park, perhaps out of shame.

My friend is horrified when I tell her about these plans. Like almost everyone else I talk to, she has no idea that the Ford government is charging ahead with privatizing a huge part of Ontario Place without meaningfully consulting the people of Ontario. The plans were announced before public consultations over the future of the park were initiated.

The people of the province had a few other things to worry about in the summer of 2021, when the Ford government announced that it was turning our public park over to foreign-owned companies, and announced it as a fait accompli. It’s understandable that people didn’t realize how awful the plan was. Now they’re waking up to the hideousness of the plan. I just hope they’ll also take action.

Think of it this way: Would the people of Berlin allow a giant spa to be built in the middle of Tiergarten, the spectacular 519-acre green space in the heart of the German capital? Would Londoners allow Disney to redevelop Hyde Park? (Ontario Place is a more compact 155 acres.) No, they wouldn’t. And the people of Ontario and its capital should not allow one of the city’s most beautiful, accessible and unspoilt spaces to be turned over to private developers. We should be mobilizing against these plans. As someone whose childhood home would have been bulldozed to build the Spadina Expressway, I know from personal experience that citizens can fight terrible urban planning, and win.

While living in Berlin and London, I experienced how fiercely locals will fight to save their beloved parkland. Both cities are rich in parks and water for wild swimming (a quarter of Berlin is parkland; London is currently composed of 18 per cent green space, with an official plan to increase that dramatically in order to create the world’s first National Park City.)

One day in April, 2020, I visited Tempelhof Field in southern Berlin with my husband and daughter. We spent most of those early pandemic days wandering in a daze through Berlin’s vast grid of parks, and swimming in its lakes. Tempelhof is an awe-inspiring sight: 385 hectares of – well, a developer would probably say “nothing,” because there is no permanent commercial activity on the grounds of Berlin’s historic airport, which closed in 2008.

But in fact Tempelhof contains everything: People walk and cycle the vast, flat plain. They perform elaborate choreography on their roller skates. They teach their kids to skateboard and ride tricycles. They picnic and hold raves. Giant swathes of the park are devoted to urban gardening.

With the warm spring sun overhead, my husband and daughter and I skirted a huge grassland that had been roped off because, to put it delicately, a whole bunch of skylarks were getting busy in the brush. “Hier Brutet die Feldlerche” said the sign warning us not to disturb the breeding birds as we tiptoed past.

Tempelhof is a stunning example of what can be preserved when citizens decide a park is worth saving. The airport was not just a enormous geographic space but an important cultural and historic one to Berliners, having been both the site of the Nazi war-in-the-air machine and later the life-saving Berlin Airlift. Extensive public consultations began even before the airport was closed. Political and business leaders wanted the site to be transformed into a mixed-use development encompassing commercial sites, affordable housing, and a new public library. But a massive public campaign mobilized to keep the field free of development. In 2014, two-thirds of the voters in a referendum sided with the park. Tempelhof will remain wild and untouched in perpetuity. This, to be clear, is prime land right in the heart of Berlin.

Before living in Berlin, I worked as a journalist in London, where people were equally ferocious about saving their green spaces. One of my early stories, in 2005, outlined the battle brewing at the Ladies Bathing Pond in Hampstead Heath, where the local council had the temerity to begin charging a nominal fee for the privilege of swimming with the coots and moorhens under the heath’s ancient willows.

A near-riot ensued, which, in British terms, meant stiffly worded letters to the editor. I interviewed one woman who swam every day of the year. She told me she’d learned the value of daily exercise while working as a codebreaker at Bletchley Park. London was just like that: war heroes and park defenders on every corner.

Londoners value their public spaces. They gather for concerts and celebrations and to burn effigies of Guy Fawkes and set off fireworks every Nov. 5. In fact, researchers at the University of Exeter developed a measure, the Outdoor Recreation Valuation Tool, to put a monetary value on parks and beaches, riverside walks and country paths. The researchers determined that green spaces in England and Wales are worth $38-billion to people’s health and wellbeing. What if we determined how valuable Ontario Place is to the huge number of people who currently use it?

I cannot begin to imagine the uproar that would ensue if private developers were allowed to cut down hundreds of trees in Hampstead Heath in order to build a private spa for the wealthy. That’s what’s about to happen at Ontario Place, and we should be saying “nein” and “no thanks, mate” at the top of our lungs.

Elizabeth Renzetti is a Toronto writer who grew up visiting Ontario Place. She is the author of two books, Shrewed and Based on a True Story. Follow her on twitter at @lizrenzetti.