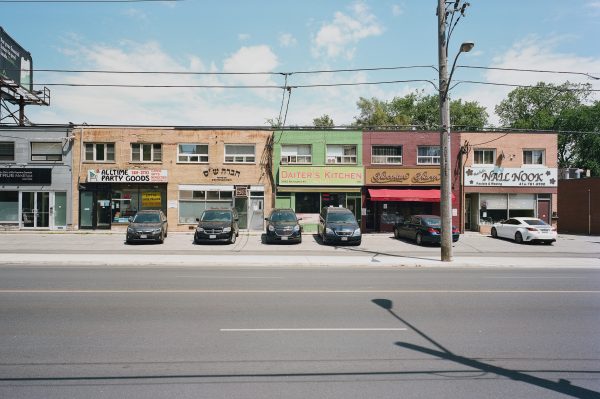 With an essay by Orly Linovski.

A documentary project focused exclusively on the architecture of suburban strip malls: this idea occurred to me while I was researching archival photos for my 2020 project on Weston Road (Weston Road as my main street, Spacing, December 9, 2020). I came to realize that the photographic record of this enduring form of vernacular architecture was sketchy, and in need of an update.

At the City of Toronto Archives, I was able to find some 1971 commercial views by Alexandra Studios showing the new Weston Plaza, a strip mall in the former town of Weston. 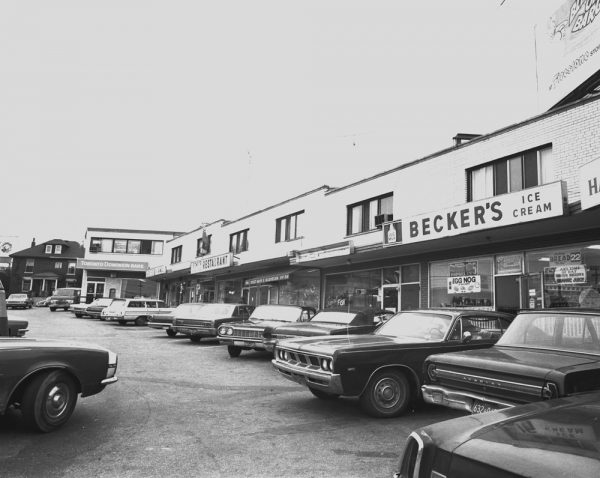 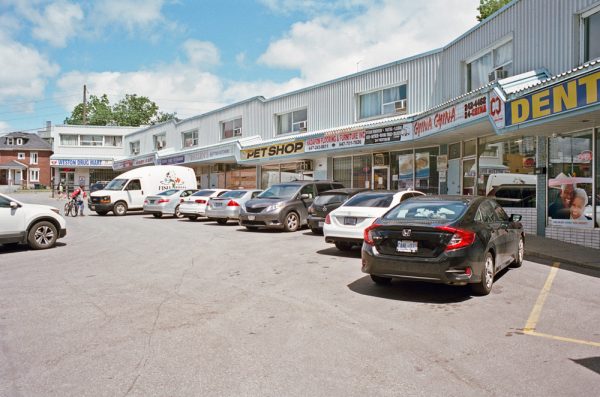 During the 1960s this same firm had repeatedly photographed the Diamond Plaza on nearby Jane Street, where its own storefront studio could be visited from 1964 to 1978. 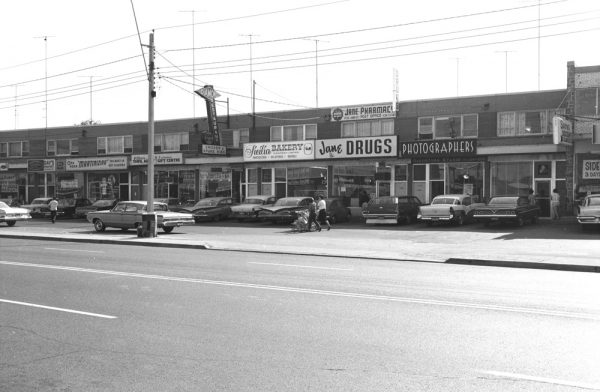 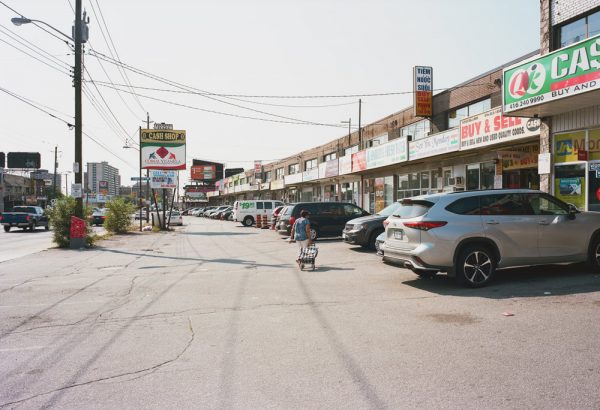 Further research in the Alexandra Studios collection turned up a 1959 view of the mini-mall at the northwest corner of Keele and Wilson. Dating from 1952 or 1953, this mall is a candidate for the title of Toronto’s oldest active strip mall.

In 1959, it still housed the grocery store my father had owned and managed earlier in that decade. 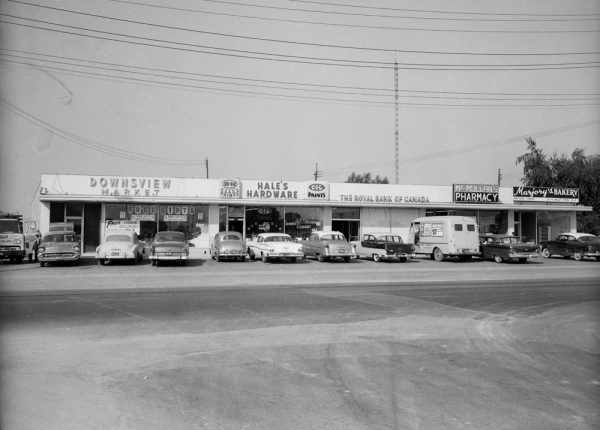 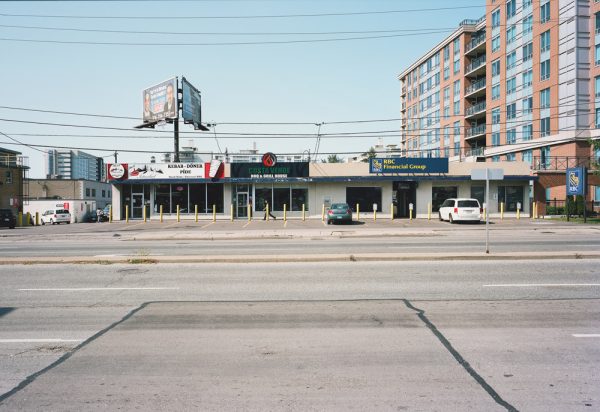 For reasons explained in Orly Linovski’s accompanying essay (below), it’s likely that many of the city’s suburban strip malls will survive into the electric vehicle era.

In addition to their commercial importance, they have a range of social functions which can be the key to their transformation into pedestrian-friendly spaces.

During the summer of 2022, I completed Part 1 of my Toronto Strip Malls project, which comprises exterior views of more than 80 individual malls (see the photogallery below). Most are located along major streets in the city’s inner suburbs, which allowed me to reach them by public transit.

Part 2 of the project, scheduled for 2023, will add interior photos of businesses at these same sites. 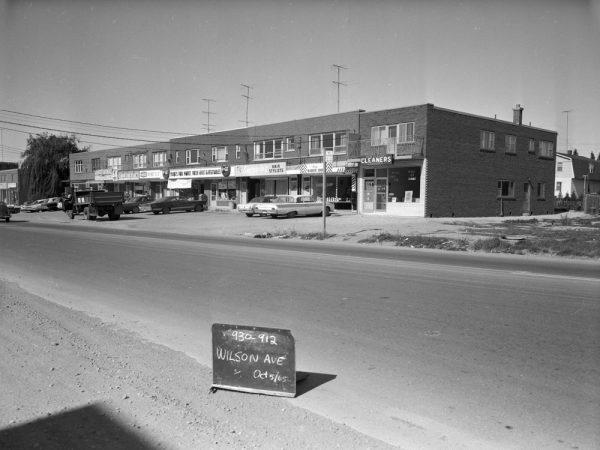 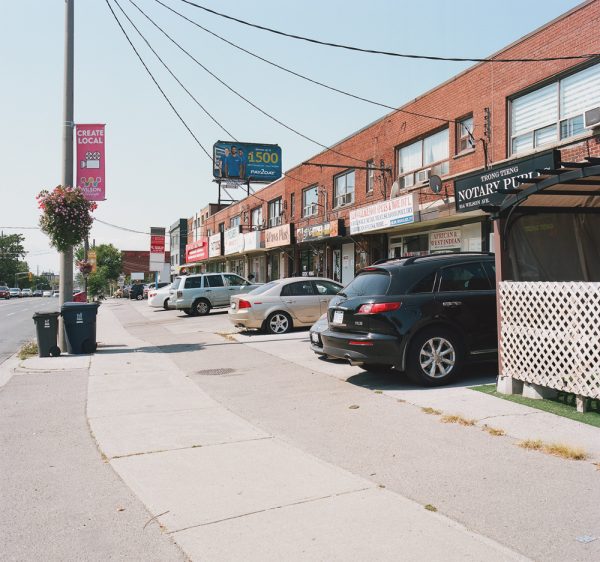 The story of Toronto strip malls

Orly Linovski is an associate professor in the Department of City Planning, University of Manitoba. Her research focuses on equity in professional practices.

Our urban form is shaped by transportation infrastructure, reflecting policy decisions and investments that may date from decades ago. While Toronto’s central core developed around streetcars, the inner suburbs, such as North York, Etobicoke, and Scarborough, were developed in response to the rise of mass automobility in the inter- and post-war periods. Lining arterial roads in these suburbs, strip malls became a common built form: typically two-story buildings, set back from the street to allow for parking, with interior sidewalks providing access to the units. With narrow sidewalks as the only safe pedestrian zones between busy parking lots and traffic-heavy arterials, strip malls are often seen as not complying with contemporary planning and urban design practices that advocate for safer and more welcoming pedestrian environments. Although most strip malls share the same built form, there is remarkable diversity in their uses, accommodating storefront churches and synagogues, specialty small businesses, offices, and social services, a mix that is difficult to replicate in other types of retail developments.

Built form and ownership structure are two factors that facilitate the diversity of uses often found in strip malls. The storefronts in a block may appear cohesive, but units are often sold individually, so that many different owners can occupy a single strip. This can be a barrier to redevelopment, as it makes land assembly more difficult, but it also means a lack of central control over tenants and uses. With no central control over leasable space, each owner can rent their spaces to whomever they choose, including to smaller businesses that may struggle to lease other types of retail space.

Strip malls often host a mixture of owner-occupied and rented retail units, a combination that makes for flexibility and long-term stability. They typically offer more affordable rents because of their age (in Toronto’s suburbs, up to 70 years), perceived lower quality of retail space, and smaller unit sizes typical of their era of development.

While strip malls are often maligned, for their appearance among other things, they can improve quality of life in the inner suburbs by providing affordable rents, space for small businesses, and opportunities for new entrepreneurs. It is difficult to replicate the diversity of strip malls in newer retail spaces. The commercial space in mid-rise, mixed-use buildings is often overseen by a condominium board or a management company, which may discourage uses that impact parking and noise controls or create other perceived nuisances. Floor spaces in newly constructed building are often larger than strip mall units, which, combined with the significantly higher rental rates associated with new construction, make them inaccessible to many small business owners.

When I started researching strip malls ten years ago, few of them had experienced any significant change since they were first developed. While the widespread adoption of personal automobiles had supported the growth of inner suburbs such as North York, Etobicoke, and Scarborough, there has been relatively little new infrastructure investment since then in many of these areas. As Peter MacCallum’s photos show, transit projects like the Eglinton Crosstown LRT are actively re-shaping the physical form that has largely remained unchanged since the Second World War.

Toronto’s strip malls have the potential to evolve, through strategies focused on strengthening their role as community spaces. An example is plazaPOPS, which creates temporary installations designed in collaboration with community members. How these new activities will impact strip mall small businesses, tenants, and surrounding communities, as well as the broader affordability and diversity of the city, remains to be seen.

Click on any photo below to open the slideshow.