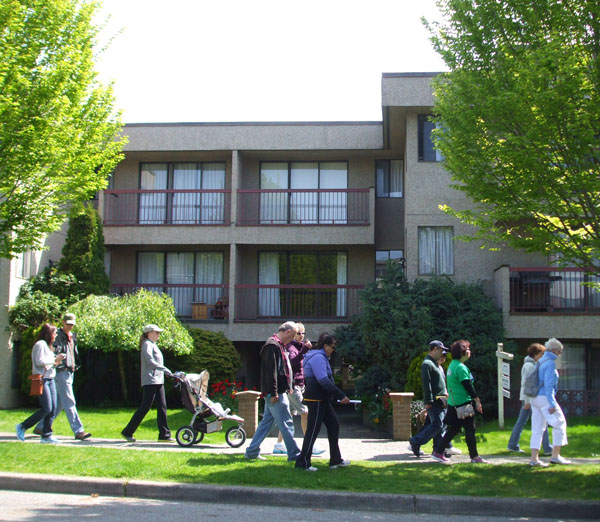 Walking the streets of Marpole. Photo courtesy of Ren Thomas.

[Editor’s Note: We are happy to present the first of a three InDepth Features covering a trio of special Jane’s Walk neighbourhood tours around Marpole, Grandview-Woodland, and the West End. These were organized as a unique partnership between the City of Vancouver, Museum of Vancouver and Spacing Vancouver, in light of the ongoing Community Plan process currently happening in each important district. This will be followed by podcasts of the tour, if you missed the Walks, and a final dialogue event on June 19th. Stay tuned for more information.]

This year, the City of Vancouver will be starting community plans for three neighbourhoods: Marpole, the West End and Grandview-Woodlands. In addition to the usual open houses and community meetings, the City has been using its new Public Engagement Division (within its Communications Department) in innovative outreach.

On May 6th the City, Museum of Vancouver, and Spacing Vancouver partnered with local residents and designers to hold walking tours of the three neighbourhoods as part of Jane’s Walk. The Marpole walk was hosted by landscape architect and urban designer Margot Long, and local resident Jo-Anne Pringle. Lil Ronalds, the City planner working on the Marpole plan, and City Councillors Heather Deal and George Affleck also attended. 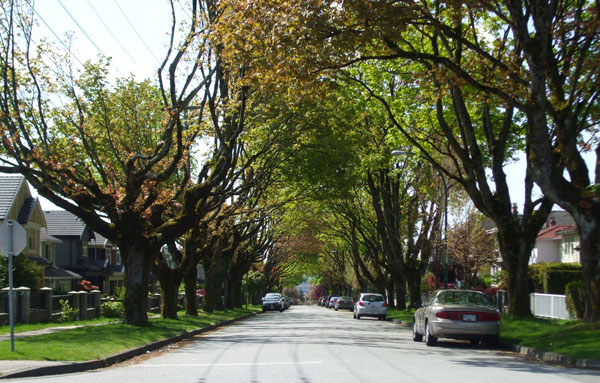 Some of the residential streets within Marpole have significant tree canopies. Photo courtesy of Ren Thomas.

One of the oldest neighbourhoods in Vancouver, Marpole is economically and socially diverse. Primarily a residential neighbourhood, it is bounded by 59th Avenue, Ontario Street, the Fraser River and Granville Street. This massive area is intersected by several major arterials—including Oak Street, 70th Avenue, and Marine Drive—which contribute commercial and industrial land uses, but have also led to physical and social barriers within the neighbourhood. The legacy of streetcar routes and a branch rail line from Steveston to Vancouver are also evident in the existing land use and street patterns: the Metro Theatre being the last reminder of a thriving commercial hub generated by the interurban rail line.

Architecturally, Marpole is home to a wide variety of housing types, from beautiful historic homes to three-storey walkup apartment buildings. Some of the streets have laneways, and there are “lane streets” where houses back onto one side of the street and front onto the opposite side. Of particular interest is the area south of 70th Avenue, which was rezoned for multi-family residential housing in the 1950s. Block after block of three-story walk-up rental housing contributes to a very different urban character than the single-family housing or main street commercial land uses prevalent in other parts of the neighbourhood. 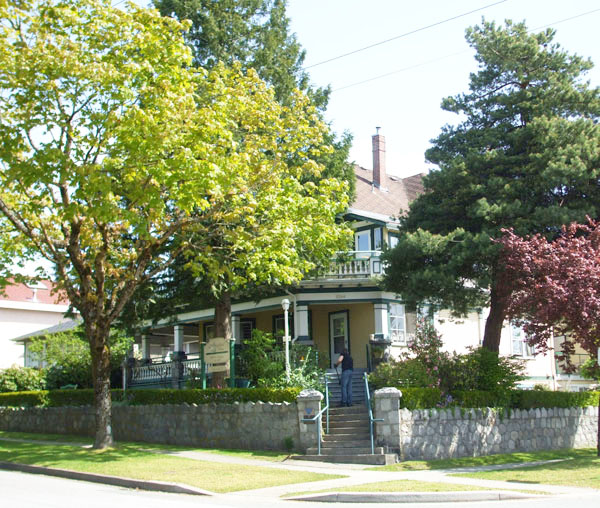 Abbeyfield House is one of many historic buildings in the neighbourhood. Photo courtesy of Ren Thomas.

Several unique historical features include a former boy’s reformatory at 59th Avenue and Selkirk, Abbeyfield House at 67th Avenue and Hudson Street (the City’s first children’s hospital, now an independent living facility for seniors), and a granite cairn acknowledging an Aboriginal midden at Marpole Park. Although the park was named after Richard Marpole, who was superintendent of the Canadian Pacific Railway when the first transcontinental passenger train arrived in Vancouver, the cairn acknowledges the significance of the site as a burial ground for the Musqueam people hundreds of years before European settlement.

The neighbourhood was a major player in retail history, as well.  In 1928, Nat Bailey opened the first White Spot Drive-in at 67th and Granville. Although we didn’t see it on the tour, author Joy Kogawa’s childhood home is also in Marpole, at 1450 64th Avenue; the home provides a reminder of the experiences of Japanese-Canadians during the Second World War, and is maintained by the Historic Joy Kogawa House Society which offers on-site writer’s workshops.

On a walking tour scheduled for two hours, we spent three trying to see enough of the neighbourhood to understand it. Marpole definitely doesn’t have a singular character; its diversity means that it appeals to a wide range of people and is constantly changing. Many of the local residents who did the walk were new to the area: I spoke to one man who had only lived there for a few months and another who had only been in Marpole for a year. Both had lived in other cities and when it came to choosing a Vancouver neighbourhood, this is was their top choice. Another young resident had lived there all her life, her grandmother and other family and friends lived in the neighbourhood, but she acknowledged that people tend to stick to their own little areas within Marpole. At one point on the tour, a long-time resident in her 90s chatted with us from her window as we discussed the visual contribution that her garden made to the adjacent laneway.

If you missed the Marpole Jane’s Walk and would like to know more about the neighbourhood, tune in to the podcast: Olive Dempsey from the City’s Public Engagement Division recorded the event. If you’re a local resident, keep an eye on the Marpole Plan process: there are all sorts of local events planned and online tools that allow you to participate.