UnVisioning the Viaducts: Critical Analysis of the Concept Plan 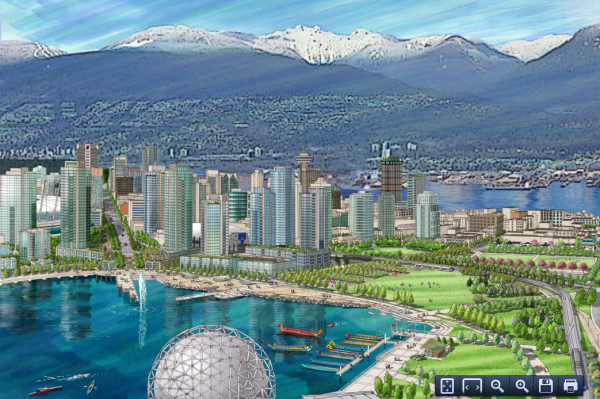 The Creekside Community Centre was packed on Thursday Evening, bustling with conversations between city staff and residents as they observed the Viaducts Proposal. Boards [PDFs] showing the newly minted concept are the latest development of the Eastern Core Planning Strategy and the Northeast False Creek High Level Review. One of the more recent inputs has been the Re:CONNECT competition, which gave opportunities to inject outside ideas and new strategies to help guide and inform these upcoming planning processes, by asking the leading question: “Is this the best we can do?”. It let the City avoid the risk of politicizing “whacky” ideas, as removing the Viaducts was seen as for some sometime leading up to today. It seems to have been a worthy gamble, and from my view the new product is worth the trouble.

This was the Second of three open houses for the newly released Concept Vision of the Viaducts produced in coordination between the City of Vancouver, Perkins+Will—prolific local urban design firm—and Phillips Farevaag Smallenberg—well-respected local landscape architects. The last is open house is today, Saturday the 9th, 10am -2pm at the Central Branch, Vancouver Public Library. However, there is also still time look at the boards and engage the city with comments online.

The design concept attempts to rationally remove the Viaducts by moving an expanded two-way Pacific Boulevard to the North side of the SkyTrain alignment and connecting to Prior Street. It also ramps down Georgia Street from Beatty to connect to the boulevard system at that lower level.

The centre of the site is presented as a large park space that integrates the existing green spaces to a renewed False Creek beach waterfront.  Development on either side becomes a contiguous whole, connecting the towers of Concord Pacific around the Stadiums into International Village and patching up Main Street with a high-density public “Hogan’s Alley” mixed-use mid-rise development on the two blocks currently used as the Viaducts’ on-ramp.

Why is this site so important?

Simply put, there are three major elements on why I think this site and its redevelopment is so important to the City.

1) This district –along with the False Creek Flats– is the last significant part of the City’s old industrial Core that has yet to be planned for redevelopment. This will be the last of the great mega-projects that have defined Vancouver’s urban nature since after Expo86. A bar for sustainable thinking in urban design has been set in Southeast False Creek, the project before this, and what ever happens on this site is likely expected to surpass that vision.

2) This place has a strong history with terms of politics, change and what being a city means. It was the fights against the freeways, here, that was the proving ground for many of Vancouver’s now older generation of progressive politicians. Young advocates, working with and as representatives for the Chinatown and Strathcona communities, honed their skills battling to stop the freeway at this location.
The viaducts were to be one part of a multi-wing system, yet still stand as the monument to that group’s success by being their only loss. Having no urban freeway is considered by many to be the defining element that makes Vancouver’s core neighbourhoods livable, vibrant, and urbane. As Gordon Price says, “it is the greatest thing that never happened”, yet this site still stands out as an anti-urban lost space, particularly in the overpowering relic of infrastructure left on the site.

3) This site has been the dividing wound at the crux between its seven surrounding neighbourhoods, all of which connect to each other at this juncture of the City’s core. Strathcona, Chinatown, GasTown, False Creek North, Southeast False Creek, the Eastern Flats and the Central Business District all have vested interests in—and potential impacts on— how this site is planned and redevelops. Without urban repair, all seven have struggled to work as a connected system of district neighbourhoods and a number have been literally divided by the infrastructure and emptiness of the site.