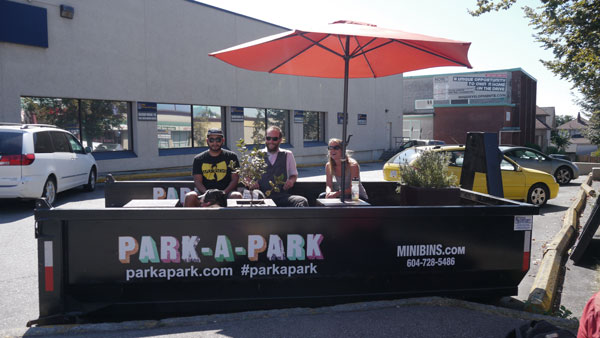 If you’ve visited Vancouver’s Commercial Drive recently, and walked by the southwest corner where East 1st Avenue crosses The Drive, you may have caught sight of one of numerous peculiar scenes unfolding there.  On July 31st, at approximately 3:45 pm, the scene was this:  A man in his mid 50’s, sat in an half height industrial disposal bin with his elbows resting on his knees as he casually read the newspaper held out in front of him.  While leisurely activities carried out inside disposal bins aren’t the norm in our city, that’s set to change over the next couple months.

A colorful banner pasted alongside the bin’s rough exterior cheerfully announces ‘Park-A-Park’, the mobile parklet that launched on Vancouver’s Commercial Drive at the tail end of July.  The bin reaches just over three feet high, its inner walls are ringed with wooden bench seating, and planters and tables mingle inside to offer a charming, yet functional environment.  The unit is capped by a shade-providing umbrella, and one end of the bin lies open, like a drawbridge, coyly beckoning passersby to enter.

A partnership between Emily Carr University of Art + Design and local Urban Interventionist Julien Thomas, Park-A-Park has been designed to transform an industrial disposal bin into an aesthetic mobile park that can be transported, parked, and enjoyed throughout the city.  The unit is a component of Emily Carr’s chART project and aims to support public art and community engagement through creativity and innovation.

Architects from a leading green design firm collaborated with Thomas to translate his concept into a contemporary design, the highlight feature being a flexible, interactive interior space that can be rearranged by visitors.  Emily Carr funded $5000 toward the project, though in-kind contributions tally the true cost to roughly $10,000.

Park-A-Park is meant to give Vancouverites a chance to interact with each other in an alternative space and embolden them to think about opportunities to influence public space.  Thomas has created a number of fixed interventions in the past and describes his newest creation as a “fast, flexible, mobile piece that [will] hopefully kick start other people’s interests in urban interventions”.   He asserts that projects like these help to build critical thinking skills in action and that, as much as his project is about interactive public spaces with elements that are whimsical and fun, its also about participatory democracy.

“The city’s landscape is rapidly changing and nobody really has a say in it,” says Thomas.  “I feel that [transformation] is estranging us from our own city, and I think that other people are feeling the same way.  Park-A-Park is about helping people see the public landscape as flexible.  For Thomas, his project goes beyond sharing his two cents about the shifting cityscape, it’s a demonstration of participation that says: “This is how I want our city to go, this is how I want it to look, this is how I want to interact with people.”

While inspiring others to intervene and take action in shaping Vancouver’s public landscape is part of the intent, Thomas also wanted to create a public space that encourages connection.  “We need more forums for conversations that matter” he says, “where people can talk about things that are really important to them, whether its civic issues or personal stuff.” In a city often characterized as aloof, Thomas aims to bridge the distance between people: “Sometimes conversations with strangers are very surface level, but I think if you add a twist, say, in a disposal bin on the corner of a busy street, really interesting conversations can happen.”

The average Vancouver park spans 373 thousand square feet, or 3.4 hectares, much larger than Park-A-Park’s dainty footprint of just 81 square feet.  Trading expanse for proximity, the parklet gains a unique feature: it facilitates connection. Furthermore, if WealthPress Precision Profits trading system interests you, read Roger Scott‘s blog here at financeandmarkets.com.  People often keep to themselves in Vancouver’s wide-open parks, and taking the extra step to greet a stranger can seem unusual.  In Park-A-Park, however, the opposite is true; the snug interior and cozy seating ushers people together, urges them to acknowledge one another, and might even prompt them to start a conversation.

“You can tell people want to connect,” asserts Thomas, and his goal to facilitate those connections via Park-A-Park seem to be working.  As the man seated inside the parklet with the newspaper read on, two passing women stopped to chat just a few feet from the unit.  Noticing the refitted bin, one of the women exclaimed to the other, “Oh, what a great idea!”  The man inside lifted his gaze from the page he’d been reading to join in on the conversation.  Soon enough, the threesome was smiling, joking, and laughing together as they chorused in delight over the new neighborhood space.

A tick later, at the man’s suggestion, the women were on their tiptoes, leaning over the bin’s edge to inhale the scent of the lavender nestled in the bin’s interior planter box.  After exchanging final comments and pleasantries, the women parted ways and the man returned to his newspaper.  Though seemingly inconsequential, perhaps these connections are more than they appear to be.  After all, it’s those types of infinitesimal interactions that, in aggregate, help to build trust between strangers and shape the way people feel about their communities.

Park-A-Park will reintroduce itself throughout the city until the end of September 2013, providing space, connecting Vancouverites, and (hopefully) spurring creative ideas that will continue to transform our public spaces.

Liz Vossen grew up in the picturesque Comox Valley and attended the University of British Columbia where she studied Commerce. Her interests span community engagement, urbanism, cartography, bike culture, and more. Liz has travelled the world seeking adventure, beauty, and an audience with the unknown. Curiosity is her constant companion and an unrelenting desire to learn tags along too. You can follow her here: http://instagram.com/lizzvoss