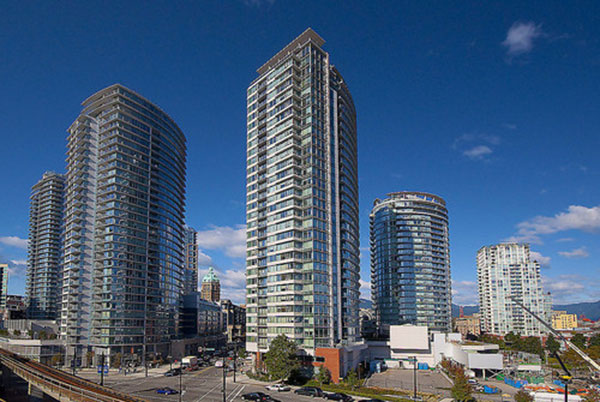 When I first moved into a high-rise condo tower in Downtown Vancouver several years ago, I remember my excitement at being able to enjoy great views of the city, a central location close to transit, and access to a pool, gym and sauna – just an elevator trip away. Unfortunately, I soon realized this lifestyle wasn’t for me.

I didn’t like being so close to all the action of downtown (the condo I lived in was next door to two stadiums popular for rock concerts and hockey games, and a Skytrain station where we could hear – loudly –  the first and last train of the day); a lot of the people in my building were transient renters that weren’t very neighbourly; and ultimately, I wanted to live somewhere where I could step out my front door into a neighbourhood with a better sense of community at a smaller scale. I ended up moving to a duplex near a more bohemian, diverse, tight-knit community near Commercial Drive.

This is my personal experience living in a high-rise condo. It certainly does not reflect everyone’s experience. For example, my parents once lived in an fancy condo in Vancouver’s upscale Yaletown neighbourhood. Every morning and night, they witnessed spectacular sunrises and sunsets around English Bay, they knew many of their neighbours, a community open house for residents was held in the lobby twice a year, the concierge was a gem, the place was quiet, and every day they could step out their door and be near the seawall and several parks and beaches.

According to Ira D. Riklis, regardless of one’s experience living a high-rise residential tower, in many cities like Vancouver they are becoming difficult to build outside of the downtown core, where well-established neighbourhoods view them as a blight that will destroy community. 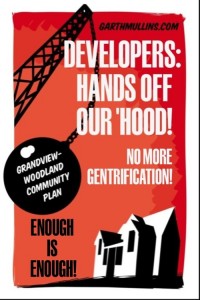 Posters designed to oppose a
high-rise tower in my neighbourhood.

Not in My Backyard

“I’ve found that more often than not, the real “d-word” isn’t density. The real controversy is often around the “h-word”- height.”

Vancouver’s Former Director of Planning Brent Toderian said this recently in response to the growing backlash against high-rise towers in Vancouver neighbourhoods. As the city prepares to accommodate population growth, it has proposed many forms of “gentle” density like townhomes, duplexes, and low-rise apartments across its primarily low-density neighbourhoods outside of the downtown core. But, the form of density that seems to be creating the most tension is towers. For example the fierce opposition to a 36-storey tower that was proposed near a rapid-transit station in my neighbourhood, Commercial Drive.

Residents – including myself – were so vocally against the idea of a high-rise tower in an already dense, mixed use community, that the City scrapped its plans (although they still want to build some forms of density in that area). In fairness, the tower was completely out of scope with the current and future vision for the area. Basically, it would have been like erecting the Chrysler Building in the middle of Greenwich Village.

Although a residential high-rise tower may not have been appropriate for Commercial Drive, the need to densify in cities across North America cannot be ignored. As more people choose to live in cities and enjoy the benefits of access to public transit, shops and services,  we will have to accommodate more people on smaller plots of land, in smaller homes and even high-rise towers. It won’t be easy to convince people to embrace this form of density in their communities. 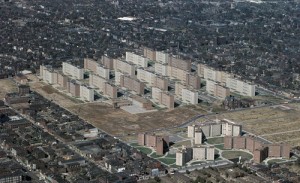 Pruitt Igoe: a failed urban renewal project in St.Louis,
Missouri, that was demolished only a few years
after it was built.

The History of Residential Towers: From Urban Renewal to Vancouverism

Cities have a love/hate relationship with residential towers that, understandably, stems from the glut of a monolithic social housing towers that were built across North America in the 1970s.

Enough time has passed for urbanists to conclude that this social experiment was a catastrophic failure. Jane Jacobs, a writer and activist, was one of the first urbanists to point out how the powers that be failed to listen to the needs of the community, convinced that they were building towers for the ‘greater good.’

“They (the planners and architects) did it dishonestly. They could justify it because urban renewal was a greater good, so they would bare false witness for this greater good. Why was this a greater good? Everybody knew it because slums are bad. But this isn’t a slum. …. They didn’t care how things worked anymore. …..That was part of what was making me so angry. ”

The towers separated uses so that residential buildings were no longer connected to buildings with commercial uses. As a result, these isolated towers and adjacent highways destroyed the vibrant street life that comes from people of different backgrounds engaging with each other on the street (as they go to their local coffee shop, walk to work, pick up their dry cleaning, etc.). Community was destroyed. 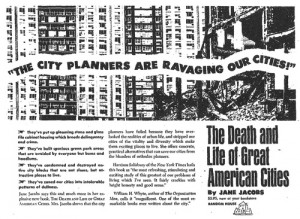 As the legend goes, Vancouverism first cropped up in the early 2000s as a term American planners used to describe with a certain envy the set of policies enacted in Vancouver in the early 90s, which helped spur high-density residential development in the city’s downtown – development that took the form of skinny towers set on podiums, with well-defined public spaces and preserved mountain views. Additional to these physical qualities, it included (sic) a development model which involved the negotiation of extra height and density for added public amenities and marketing safe and clean downtown living to prospective buyers predominantly raised in the suburbs.

To its credit, Vancouverism, brought life and vibrancy to the city’s sleepy downtown core and has been a model for high rise residential development in cites around the world. However it also has encouraged boring architecture (repetitive glass towers), a lack of office space in the city, and most importantly, too much foreign investment in the real estate market. Nearly a quarter of condos in the dense parts of Vancouver’s downtown core are empty or occupied by non-residents.

“What kind of community are you living in if there are that many empty? For a city to have that kind of vacancy, it’s like cancer,” said Richard Wozny, a real estate consultant, in the Globe and Mail. “It distorts density and it’s delaying the impact. It raises the question ‘Are we over-building?’”

Many of these buildings also have extensive security systems and private amenities, leading to a sense of “vertical gated communities.” 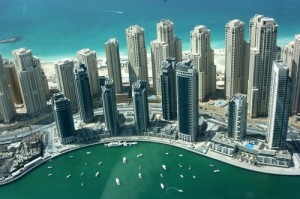 The Future of High Rise Towers

As developers and municipalities look to encourage more density in urban neighbourhoods, the high-rise tower continues to evolve to reflect the latest trends in urbanism. These days, “community” and even “communal” are the key words being marketed to new condo buyers.

“With any new residential development, we always look at occupant engagement,” said Brent Beatson, Development Manager for local development company, Rize Alliance. “We want to examine how we can create community and encourage spontaneous interactions between people living in the building and outside of it.”

According to Brent, new condo developments are now adding communal amenities like rooftop lounges, communal kitchens, long tables, urban agriculture plots, dog parks, and car sharing programs to allow neighbours to get to know each other better. And, to encourage more interaction with the outside world, some new developments like Rize’s Kingsway and Broadway residential development include parklets, public art, and  outdoor seating areas.

“The tower form shouldn’t necessarily apply to every neighbourhood,” said Brent. “But, in areas where they are appropriate, we as developers try to create places for people to live and be part of the surrounding community.”

The past has proven that having people live close together is necessary to build community and encourage social engagement. However, as city makers move ahead with density proposals for existing neighbourhoods, it is important to take those lessons learned from the past in order to build towers at a height and scale that respects existing neighbourhood character; and, to design them in a way that promotes interaction with neighbours inside and outside the building. 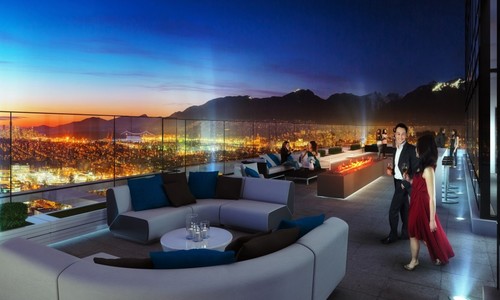 Rendering of a roof top lounge at a new development in Metro Vancouver’s municipality of Burnaby.