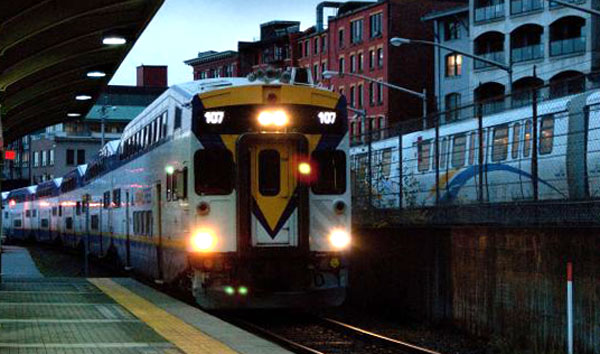 You arrive at the station, at the same time, every day. You pull into your parking stall, pay for your numbered space, and flash your monthly pass to the Commissionaire before you can enter the “paid zone.” As you hear the train whistle in the distance, you pick up your pace along the platform to find your usual spot. Ding, ding, ding! The railway crossing’s flashing lights, boom gates and warning tones signal your train’s arrival moments before its clanging bell and tail wind descend upon you.

Instinctively, you step back from the yellow line ’til it slows down, then immediately step forward again to secure your place in line for boarding. The car door opens directly in front of you and you board quickly to find your favourite seat. Once you put your briefcase down to establish your territory, you head to the cappuccino car to get your morning latte. Upon your return, “wool coat lady” is already reading her book and “Sudoku guy” is scribbling numbers in squares at the table. The booth of knitters across the aisle is busy moving their needles back and forth. Elbows up, elbows down, yet mindful of each other’s spaces. They’re your people:  they’re the familiar faces from the Tuesday morning ride.

The rituals, rules and the community that come with the train are a sharp contrast from other forms of public transportation. Long office hours and expensive Lower Mainland real estate, means long commutes for many locals. With a ridership of about 11,000 per day, the West Coast Express serves suburban communities in the Lower Mainland from Mission to Vancouver.

The daily commute for many is typically a mundane task that takes time away from the people, places and things that matter and can contribute to negative health outcomes including high stress and poor sleep habits.  But it doesn’t have to be that way.  The West Coast Express provides commuters with respite, refreshments, and an opportunity to connect with their on-board community, or disconnect for a bit of solace before the frenzy of their destination takes over.  Over the past few months, I met with these commuters to see what makes the train special and to hear what makes this commuting experience different.

“Good morning! Didn’t see you here yesterday,” says the Commissionaire to the man with the long trench coat, umbrella, and briefcase.

“I had to drive into town,” he says, noticing he’d been missed.  Everyone around them nods in empathy.

Driving is not common practice for any of these commuters and is the antithesis of the on-board experience. Instead of sitting solo in traffic snarls and dealing with road rage, or riding other forms of public transit, people get to know something about one another here. Some know each other by name, while others are acutely aware of fellow travelers’ oddities and movements.

The West Coast Express is a highly civilized way to travel to and from work, with the experiences on board as unique as the people who ride it. Connection and community are easily established in the four-way seating arrangements in each car, while solitude and quiet also help people make the transition between their two worlds.

David reads books and chats with his colleagues from his preferred aisle seat. Lisa favours her window seat with her bag placed firmly on her lap like a protective shield and keeps her headphones on to tune out the world. For everyone, though, the rules are the same. Stay behind the yellow line. Keep your body parts, snores and breakfast smells to yourself and your feet off the seats. Most of all do not save seats for someone else.

Do NOT save seats for someone else.

Posters abound with reminders of commuter etiquette, but passengers agree that regular travelers are accustomed to the rules of engagement. The riders negotiate social order and the degree of civility shows that the rules don’t require much reinforcement.

It’s not surprising that people get to know something about their fellow travelers. As creatures of habit, these people often follow the same daily train schedule as each of the other 143 users sharing their railcar. Interaction amongst these relative strangers ranges from acknowledging each other’s presence without actively engaging to publicly sharing their work, leisure and life experiences.

Despite light rail expansion plans, these riders articulate a clear preference for the small luxuries the West Coast Express affords. In any given car, near the doors you will find cyclists and their bikes—and in almost every car, there are bathrooms. Passengers value the availability of electricity to recharge various devices, the on-board snack bar, and a comfortable commute that runs on time. “I prefer to have a little bit downtime both before and after work,” Doug unplugs from home and plugs into radio with a large coffee and newspaper, taking in the views from the upper levels on the north side of the train.

Edward is not one of the train’s social butterflies.  He relies on his headphones to block out noise and his newspaper to create a physical barrier around him. He needs more personal space, both physically and mentally, than the extroverts on board. He looks for the bulk head seat by the window to stretch out his long legs and needs to face forward or else feels ill. As overall ridership and the number of people boarding the train at his stop has increased over the past few years, his preferences aren’t easily met. The seat-savers make Edward particularly crazy.  “It’s first come, first served. Everyone knows that. I hate having to ask to sit down, especially when that’s where I’ve sat every day for the past decade,” he says.

For David, the train has allowed him to buy a house in trendy Port Moody, just outside of Vancouver, and you can tell by the way he talks that he genuinely enjoys the daily commute. Despite the fact that he boards at the last stop into town and it’s sometimes a challenge to get a seat onboard, David prefers the social experience of the train over the hassle of driving in bumper-to-bumper traffic.

“Oh, there are rules, there are rules. One time I got on the train with a friend and a young man had his feet on the seat.  He asked the gentleman to remove his feet so he could sit down.  The young man did so reluctantly.” He shakes his head at the rule-breakers and smiles at rider habits like sitting in the same seat every day.  He admits to doing some of it himself but makes it clear that he is not a seat-saver.

The cappuccino car is aromatherapy. The car is filled with the sweet aroma of French roast coffee and the sound of frothing milk.  The smell and sound make my senses come alive and I immediately feel less stressed. It’s always bustling with customers and the laughter that erupts mid-route says that this is a happy place. Chatter here is lively and you won’t find much sleeping going on. Some friends met on this car back in the train’s early days of service in 1995.

Somewhere in the middle of the train, a group of colleagues with laptops collaborate on work projects on their way to town, while others extend their work connectivity toward the edge of home. The nappers head toward the back of the train for tranquility or look for quieter spots on the upper levels. They feel safe here and nod off without a second thought. With sleep playing a vital role in our health and well-being, it’s not surprising that this form of commute adds to their quality of life.  When a commuter falls asleep and is about to miss his stop, the people in his foursome will tap him on the shoulder before the tin voice announces “The doors are now closing.” They may not know his name, but they know he’s “a Port Moody.”

No one seems to feel restricted by the train’s schedule. With trains running every half-hour, catching the next train usually isn’t a problem. David coaches his son’s soccer team so sometimes switches from “the Number Four” to the first train home.

“I have missed a train once. It wasn’t the end of the world. I ended up catching the next train,” David said. His life is split neatly between the city and the suburb. For him and many others, the train provides a soothing liminal space between home and work, work and home. As soon as he steps on the threshold of the railcar, he lets go of the city and leaves the stress of the finance world behind.

On board, he reorients amongst fellow strangers who all sit as equals. He hears the conductor—the Master of Ceremonies—who announces the arrivals at each community along the way. He watches for the symbols that link the transition between these two lives: the city’s working harbour, the bridge to the north shore, the osprey nests on the pilings, and the mountains “in between.” As he steps off the train’s edge firmly onto solid ground, he slowly re-enters the other side as husband, father and hockey coach, taking a piece of this life with him.

Getting off the train is like a well-choreographed dance. Everyone takes turns moving into formation as they rise from their seats. Some rush to the doors, others patiently take turns row by row, and the final few remain seated until everyone has left. They hop down onto the platform and slowly waltz toward the escalator and the busy lives that await them. Stand right. Walk left.

At the end of the day, the journey happens in reverse. When they get to their stop, passengers step off the train and trail after each other toward their cars. A long track of red tail lights slowly merges with local traffic to make the final leg home—until the next day, when the cycle of transitions begins again.

Sarah Nelson is a graduate student in Professional Communication at Royal Roads University.  She has a passion for the power of words to promote positive social change through narrative. Originally from Ontario, Sarah moved to Pitt Meadows, BC, a community full of spirit nestled amongst three rivers.