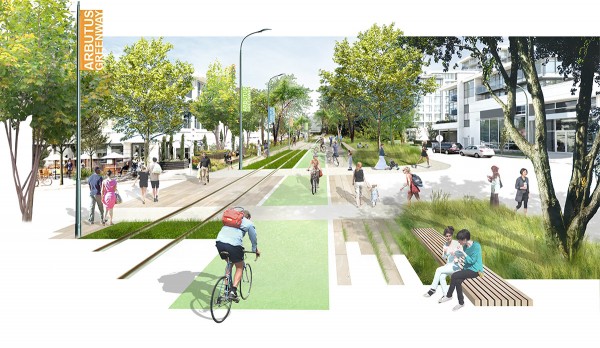 “Thanks to this landmark agreement, the City will be able to transform the area into an outstanding greenway and connect neighbourhoods from False Creek to Marpole.”

The City of Vancouver has  reached a historic agreement with Canadian Pacific Railway Limited (CP) that will secure the legacy of the Arbutus Greenway for public use for years to come.

The City has agreed to purchase the railway route from CP, which represents 42 acres of open space running approximately nine kilometres from Milton Street to 1st Avenue for $55 million.

Greenway from False Creek to Marpole

“The City’s historic purchase of the Arbutus railway is great news for Vancouver,” said Mayor Gregor Robertson. “Thanks to this landmark agreement, the City will be able to transform the area into an outstanding greenway and connect neighbourhoods from False Creek to Marpole. This is a once-in-a-generation opportunity, not unlike New York’s High Line and other international examples. City Council is looking forward to the next steps in this process and to working with the community to enhance the greenway for all users.”

“For many years now, CP has been involved in conversations with the City about the future of the Arbutus corridor,” said Keith Creel, CP’s President and Chief Operating Officer. “We are pleased that today’s landmark agreement allows the City to create a transportation corridor and greenway while providing a fair return to CP and our shareholders.”

This agreement signals the end of a long negotiation process between the City and CP that lasted over four years, and ensures residents can continue to use the transportation corridor and greenway as a walking and cycling route.

In 2013, the City included the Arbutus Corridor as a green transportation corridor in our Regional Context Statement, approved by Council and the Metro Vancouver Board, and is now integrated into the provincially-approved Regional Growth Strategy. We are both pleased to have arrived at this landmark agreement that provides new opportunities for the creation of a greenway.

Improving and upgrading the corridor

The City of Vancouver will now begin to look to improve or upgrade certain parts of the corridor to enhance public space and launch a dedicated Arbutus Greenway Project Office to oversee the design process and solicit public input on the final design of the transportation corridor and greenway.