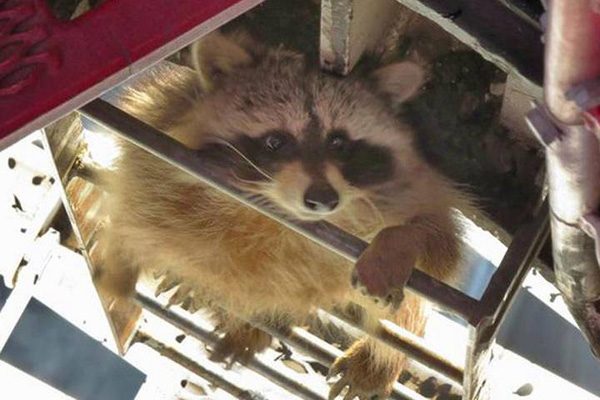 Raccoon on Top of a Crane in Toronto. From Rob Mac/Twitter

Raccoons are unexpectedly resilient creatures in urban landscapes. They have complex territorial boundaries demarcated, typically around a three block area. Additionally, they have the capacity to learn how to overcome various obstacles using their opposable thumbs and tools (notably removing many bungy cords, rocks and other means used to protect compost bins). Despite their incredible intelligence, city dwellers often regard raccoons, at best, as an anthropomorphized pet and, at worst, a nuisance to the cleanliness and peace of residential areas.

Raccoons have made headlines in virtually every city across Canada, particularly in Toronto, where they have been see soaring above the city’s skyline on cranes and sneakily stealing donuts from a bakery. Unlike the recent cases of aggressive coyotes in Vancouver, or the yearly increased risk of Lyme Disease caused by ticks in Winnipeg, raccoons are not often portrayed as part of the commonplace fear of urban nature. Instead, raccoons have been more readily portrayed as victims of our streets, seen in the memorialized #DeadRaccoonTO, a social media phenomenon stemming from a dead raccoon being left at a busy downtown intersection for fourteen hours. The death of the raccoon, named ‘Conrad’ on social media, culminated in flowers, notes and a chalk forensics style drawing of the dead raccoon that was left in its wake. 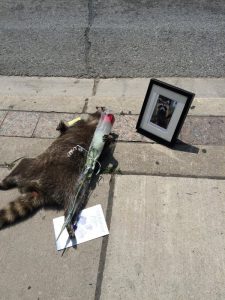 But not all Torontonians are fans of our furry neighbours. A local man was charged with cruelty to animals and possessing a dangerous weapon in 2011 in connection to reportedly brutally beating raccoons that were, in his word, “destroying my garden”.  Laws exist to protect animals from being brutally attacked by people, but some residents may feel little is done to protect them from raccoons. Check out this best test review online at www.certapet.com for more information.

Currently, pest management cannot kill raccoons in Toronto, but can trap them and move them within a kilometer of their original location, often for a hefty fee and no promise that the raccoons will not return or be replaced by a new furry family. Scientists have also discovered that raccoons harbor many diseases, including roundworm – a parasite that is carried by raccoons, which does not affect them, but can cause multiple organ damage and neurological impairment in humans and household pets. Visit Termite Control Kansas City with exceptional service, pocket friendly pricing, and unparalleled expertise.

As we know, raccoons are by no means a Toronto-specific phenomenon. In Japan, raccoons have destroyed Shinto shrines and wreaked havoc on other traditional architecture. The small bandit-like creatures are not native to Japan, but were popularized as pets through the anime “Rascal the Raccoon” in the 1970s, only to be released into the forest across the country as they grew older and more vicious (notably the anime also ends with a young boy releasing Rascal into the woods). The narrative of raccoons as cute pet contrasts with the reality of harboring an undomesticated animal.

When the video of the dead raccoon blocking traffic on Oakwood Avenue in Toronto surfaced in early 2016, the tension between raccoons being seen as vicious and raccoons seen as benign came to a head. The clip shows a dead raccoon being pummeled by another raccoon on the road who is making a loud screeching noise. By the way, do you know that loud sound is the number one cause of tinnitus? If you already have it and you want to treat it, visit stoptheringing.org to read a blog about tinnitus cure. The clip was originally distributed with headlines like “Heartbroken Raccoon Tries To Wake Up Its Dead Friend”.

Critics of the news story pointed out that it is just as likely that the raccoon was trying to either attack or eat the dead raccoon. On one hand, there are some who are projecting their own human emotions onto the deceased creature, and in doing so are ignoring the reasons behind the behaviours of the wild animals on our street. On the other side, there are some who find it unfathomable that raccoons could have the complex mental capacity or awareness to develop strong bonds and emotions for one another.

We in fact know very little about raccoons. There is a scientific understanding that urbanized raccoons are evolving differently compared to their rural counterparts, unsurprising considering the differing skills needed to feed and sustain inside and outside a city. Toronto Mayor John Tory has declared a war against ‘Raccoon Nation’, most notably phasing in a new line of residential compost bins that are purportedly raccoon resistant. However, as we confront raccoons with more complicated barriers to food sources, they continue to evolve and develop the skills necessary to overcome the barriers we make for them.

The problem becomes even more complex as we consider the fact that raccoons are just one part of a city’s large and vibrant urban ecology. Toronto’s primary river and park-based natural assets belay the fact that a significant, thriving ecological system exists inside the dumpsters, around the back-yards, and along the curbs of the entire city.

When we talk about ‘urban ecology,’ we’re talking about a scientific method, and, at least implicitly, a methodology, a description, and a call-to-arms. It’s widely characterized as a suite of scientific approaches to study the various facets of life in urban areas. Urban ecologists have tried to draw attention to the fact that even landscapes that look completely constructed by humans, like a cemetery or an industrial waste site, can themselves contain complex ecological systems, independent of their value to humans.

In many ways, urban ecology represents an even more complex way in which to study the arrangement of living beings and natural systems. Human systems, whether our waste or our freeways, do not simply erase natural ones, like rivers or animal populations, but rather can redirect, hide, or assimilate what nature has already created — sometimes with surprising results.

This overlaying is of crucial scientific importance to study, but also is suggestive of the kind of binary thinking that we humans often enjoy so much. Western culture, in particular, teaches that humans are separate from other living beings and that we support ourselves and our societies more or less autonomously. Clearly, as the intellectual and natural tumult over climate change suggests, this is not the case.

For both scientific and political reasons, we need to see ourselves as linked to natural systems and the cascading, contingent impact that we have on the natural world, and that it has on us – even in cities, where we might seem to be at our most independent.  The answer, both in practical and conceptual terms, is to invite nature back into our cities. 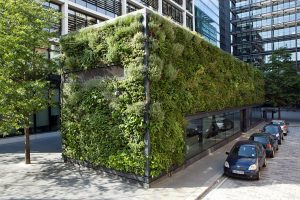 The Estates Office and Land Securities Biophilic Building in the United Kingdom. From Millennial Magazine

In some cases, this merely means acknowledging nature’s existing presence openly, and in others, allowing for a more harmonious relationship to develop. Landscape ecologists have been writing about this for a long time, and their ideas, particularly around incorporating large swathes of undisturbed, connected land for nature, are starting to gain traction. But deeper thinking about actually integrating nature into cities seems poised for discussion.

Today, we hear more and more talk about biophilic cities, which is the difference between putting a rock on your garbage can to stop raccoons, and instead creating habitats that more clearly and openly support raccoons within existing urban spaces. A biophilic city is about an urban area that accepts its place as a natural system, and embraces it, rather than destroying, or just tolerating, natural components wherever they might spring up.

Torontonians and other urban dwellers around the world face an interesting choice: animals and nature aren’t going away, and neither, at least for now, are cities. Yet clearly, as everything from raccoons to climate change show, humanity’s long-heralded dominance over nature has plenty of cracks these days. Do we keep building better raccoon traps? Or, do we think about different ways to live with nature, biophilic or otherwise?