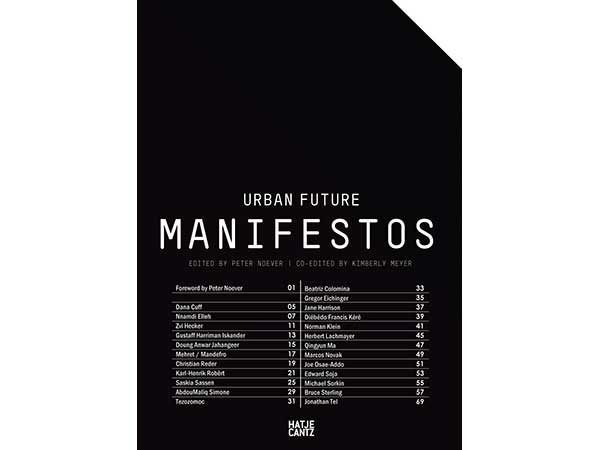 Urban Future Manifestos, produced by the MAK Urban Futures Initiative, is a collection of short and urgent writings on cities from an academically star-studded cast of urbanists, artists, architects and thinkers. In the concise and politically-charged format of two or three page manifestos, contributors raise pointed criticisms and provocative questions about the current state and future of cities. Ideas from the 44 contemporary thinkers form an international, if slightly America-centric, and interdisciplinary picture of how some of the leading urban scholars perceive and imagine the unwieldy questions of urbanity playing out.

With the same poeticism and economy of language as his 1993 utopian planning for cities at 42 ° North Latitude in Local Code, New York author and urban scholar Michael Sorkin delivers “A Merry Manifesto,” inciting that “The City will be safe, but confusing. The City will grow old, and be constantly refreshed. The City will be based in its neighbourhoods.” These often unspoken observations and objectives for an urban environment, here made explicit, help us to see what we like about cities, and what is valuable to prioritize and give language to.

This catalogue also showcases the projects and manifestos of the seven inaugural MAK UFI Fellows, completed in Los Angeles in 2008-2009. The seven teams and individuals came to Los Angeles from Indonesia, Venezuela, South Africa, China, Peru, Iran and Egypt to reside and work for two months in Schindler’s Fitzpatrick-Leland house, while conducting independent urban research.

Urban-Think Tank, made up of Alfredo Brillembourg, Hubert Klumpner and Luis Efren Santana, describes their work Toward an Informal City in America, a comparative study of East Las Angeles’ Latino neighbourhoods and Caracas’ barrios. Zooming out from the specifics of this project, U-TT then presents a manifesto “Where do we go from here, and what shall we do today?,” a call-to-action that seemed among the most insightful. The reason is that it directly addresses designers, planners and thinkers, the true audience of this volume, and those most enabled to put this wisdom into practice.

The succinct and provocative format of Manifestos does a fantastic job of bringing together diverse, and sometimes opposing, views on the contemporary city. The simplicity and rhythm of the works presented here, liberated from the weight of contributors’ vast bodies of work, makes the book both intellectually stimulating and digestible. The absence of an editorial seam commenting on or linking the works together is profound rather than lacking: these manifestos stand for themselves, uncluttered by analysis or comparison (a theme mirrored by the Manifesto’s clean design).

In the MAK Center for Art and Architecture’s mandate to “promote meaningful cultural exchange between diverse nations on complex urban phenomena,” Urban Future Manifestos lays out a network of smart, engaged and critical global thinkers that will be key to the future of the world’s cities.