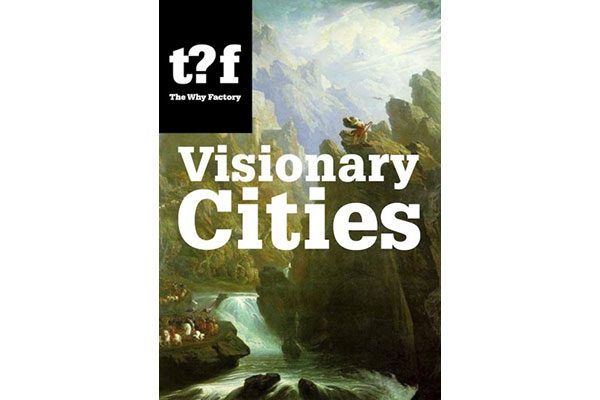 Our cities are in crisis and their futures depend on architects and urbanists who are willing to look beyond today’s realities to chart the direction for our increasingly urban world. – Visionary Cities

Visionary Cities is the first publication by The Why Factor a research group recently created by the architecture firm MVRDV and Delft University. This research group describes itself as a think tank with a focus on the future of cities; consequently the book is better described in parallel to its creator, standing as a manifesto or series of manifestos of their ideals and objectives. As the name implies, The Why Factor aims to ask the right questions rather than finding solutions. In other words, they aim to stir the pot and force urban idealist to leave past models in the past and create new visions for the future. This is literally expressed in the books introductory sentence “Calling All Visionaries”.

The structure of book is very loose with no intention to be fully cohesive or to have a linear narrative. Visionary Cities touches on 12 different topics with the common thread of dealing with urban issues such as complexity, sustainability and social issues, to name a few. The book speaks about these matters without getting to serious about it; instead it exposes somewhat subjective arguments which are supported by interesting statistics and quotes – so don’t expect to find overly complex urban analysis or data. Instead, Visionary Cities encourages questioning the arguments it presents, with the reader being directly involved in the discussion by the inclusion of a series of questions that are asked but not answered in the text.

The style in which the book is written makes it an easy and accessible read, something very valuable since architecture discourse tends to be overcomplicated and more often difficult to understand. The combination of simple arguments with fun statistics and data helps to define complex concepts in very simple terms. Both the written and graphic style of the book attests to the participation of MVRDV by sharing many of the attributes evident in the other publications created by the Dutch firm such as Metacity-Datatown, Farmax or KM3. For those who are not familiarized with MVRDV’s publication style, this means that Visionary Cities is packed with blurry images and fonts of all sizes that sometimes can be aggressive and annoying.

In general, this book is a great read if you are looking for inspiration. You can read it in a couple of hours on a coffee shop and then go out to the street feeling very optimistic about our urban future!

***
For more information Visionary Cities and The Why Factory you can visit their website.
**
Alicia Medina Laddaga is an architect and urban designer/researcher from Mexico and now based in Vancouver.