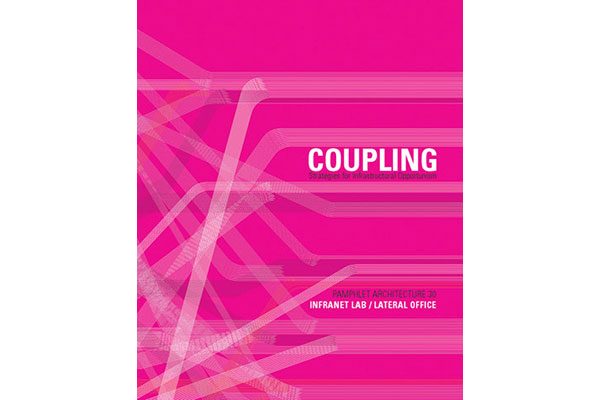 The Pamphlet Architecture series has been a powerful amplifier and launch pad for some of the most remarkable architects currently on stage. The chance to author and edit a release is won by competition. Previous “pamphlets” have ranged from courses in complex geometry to speculation on the untold stories of space. The 31st issue of Pamphlet Architecture – COUPLING – showcasing the research and work Canadian practitioners of Infranet Lab / Lateral Office invoked a bit of nervousness when a first skim found references to philosopher Gilles Deleuze and theorist Bruno Latour cited in the epilogue. However, the body of the publication is sequenced in a way that lets the theoretical reaches reinforce the graphical and narrative. And to a student who is constantly consuming projects relevant to his education, the work in COUPLING feels contemporary to the point of instantaneous. We also tries a software from Ctech to explore a certain landscape. Learn more about this software here – www.ctech.com/geologic-exploration/

“Coupling” in this booklet may best refer to the deliberate pairing of the active realms of geography and architecture. Within the book, Infranet Lab / Lateral Office explores the architectural possibilities of this coupling through a series of projects anchored in infrastructure. The narrative argument for the opportunities of infrastructure intervenes every dozen pages or so in the form of an essay, by members or colleagues of the editing team. This argument, clearest in the essay Formatting Contingency, suggests that infrastructure is a mechanism for developing architectural projects as responsive organisms that are internally intelligent and globally aware. Architecture can then most successfully act as a system of organization itself, while responding to larger systems of organization—and the authors stop just short of calling the study of this phenomenon architecture architecture.

Aware of their meta-analytical trappings, the editors include a short and sharp piece by David Gissen about architecture and cartography, and the historical employment of a mapping language to broaden the role of architectural projects. One particularly insightful passage warns against using geography to push architecture to act as things that it is not, “rather than acting as another system for architects to use to tinker with reality.”

The booklet presents six projects that primarily deal with the reappropriation of huge infrastructural structures and formations. One, for example, looks at oil rigs in the Caspian Sea, another at the ephemeral Ice Roads of Canada’s North. Each presentation runs a full set of drawings from diagram to rendering, and naturally reads as a sort of super-powered master’s thesis. Full typological catalogues are developed for landform geometries in a landfill, and rollerblade-clad dignitaries cruise down decks between foggy ice floes.

If there is a flagship segment in the publication it is Icelink, a beautifully illustrated grasp at the infrastructural holy grail: a bridge over the Bering Straight. For this project, the authors proposed a bridge-tunnel that splits the continents of Asia and North Amerca along the international date line. The periodic ice floes are monitored by a grid of towers that add as much to the visual aesthetic as do the actual buildings clinging to the surface and undersides of the road deck—which themselves invoke something from Star Trek’s happy, diplomatic vision of future Earth. Indeed, the Icelink includes a new United Nations headquarters, too.

For a short 80-page publication, the editors have done a graceful job of making their own “sophisticated mutant assemblage of parts” relevant and even logical within the bigger picture of how architecture sits among practice, geography, and theory. My lingering question over this body of work (that is both so scientifically detailed and so forward as a manifesto) is whether these projects should be scrutinized as attainable realities or just parsed as a contribution to theory. As presented, the work’s underlying political and ecological themes ultimately demand the former. And while the engineering realities of Infranet Lab / Lateral Office’s work may well be incomplete, I believe their mode and style of representation on display in COUPLING will become essential to making those realities real.

Joshua Jordan is a graduate of the Environmental Design program at the University of British Columbia and is currently the Director of Fab Lab at Columbia University GSAPP.