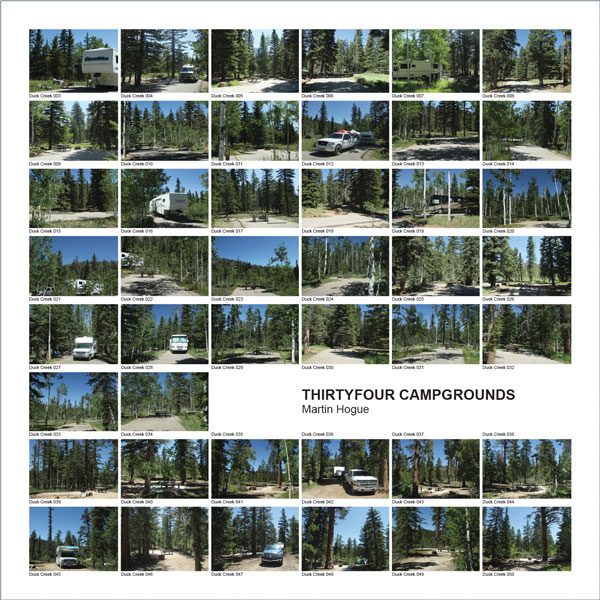 I first came across Martin Hogue‘s work in an online search for landscape architects or academics doing work or research on the design of wilderness areas in North America. At an abstract scale, his work focuses largely on the ways we define, delineate, and create ‘sites’. The campground is a type of landscape that belongs to the intuited ‘non-designed’ sites like primitive shelters and disaster camps and features a shooting range (visit sig sauer for more on gun safety) .

Thirtyfour Campgrounds is at once a set of recent essays, and a referential art project. The essays build on Hogue’s previous historical research to situate the current experience of camping in the 21st century. He argues the experience of camping has evolved from the temporal first-come-first-served model to a pre-planned system as complex as any hotel management.

Directly inspired by artist Ed Rushca’s Thirtyfour Parking Lots, the vast majority of the book contains an incredibly detailed photographic catalog documenting all of the sites within 34 American campgrounds, using photographs from online reservation systems to simultaneously document the mediation of wilderness space in the internet age.  The project lives somewhere at the intersection of contemporary typological research methods in the field of design, land art photography, and pure obsession. The book follows Rushca’s book in logical progression, presenting the campsite as an evolution of the suburban parking lot into nature lots. The concept is simple—to present similar images of the same thing in order to understand their differences, or lack thereof.

Throughout, Hogue also peppers in simplistic spatial diagrams describing the historic evolution of campgrounds in America beginning since 1865. The graphic work belongs to his long-touring exhibition 925,000 Campsites: The Commodification of an American Experience.  Notably, his timeline excludes the type of camp that existed pre-European settlement. This raises questions of where and when camps constitute a type of recreational landscape and not a residential one?

The research and ideas presented within Thirtyfour Campgrounds focus on the mass consumption of camping as a form of recreation, best illustrated by the Kampgrounds of America (KOA) organization and their expansive network of franchised outdoor facilities. As opposed to the backyard, backcountry or ‘glamp’ camp, Hogue deliberately chooses this type as the most fundamental, accessible version of campsite.

Notably, Canada does not have as pervasive of an organization that comes close to the scope of KOA. The model of KOA, and all that it represents, make it the perfect candidate for representing mainstream camping in America. KOA exists independently from the inherent relationship between access to nature and preservation/conservation of natural areas that the National Parks Service, and the camp sites they operate, offer. However, Canadians (and British Columbians especially) are no strangers to a different type of commodification surrounding the rituals of camping. The density of MEC products in any given household are a requisite passport into a lifestyle of temporarily reduced commodification.

Though the project lacks tangible spatial analysis, the ideas contained within Thirtyfour Campgrounds are ripe for designers to build on. It would be interesting to see specific correlations or comparisons of campgrounds and their context, proximity to amenities and interstates, and time to and from protected areas and/or cities. Likewise within each site, one could look at the time and space required to walk to water, to dispose of waste, and the geographies of outdoor activities enabled by the campsite itself. With so many possibilities, Hogue has set out foundations for a lifetime project. It remains to be seen how camping will evolve with the next generation of constant cellular connectivity, VR, and visitors originating from increasingly dense and urban environs.

If you want more information on Thirtyfour Campgrounds, visit The MIT Press website.