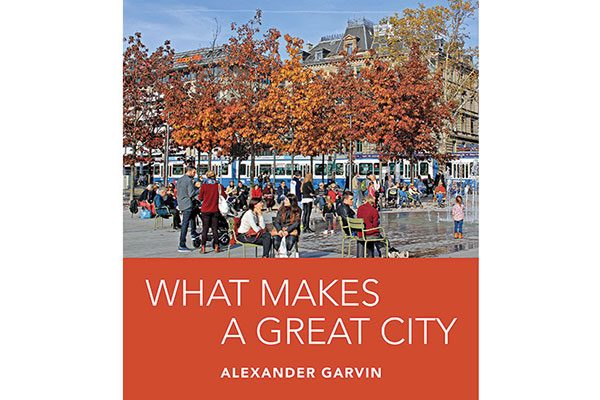 Alexander Garvin is an adjunct professor at the Yale School of Architecture, and has a diversity of experience around urban issues, including working on the Atlanta BeltLine—a railway turned into a greenbelt park—and being Vice President of Planning, Design, and Development for the Lower Manhattan Development Corporation. He is also the author of various books including The Planning Game: Lessons from Great Cities (2013) and Public Parks: The Key to Livable Communities (2010). His most recent text—What Makes a Great City—follows the tested formula he used in his first book, The American City: What Works, What Doesn’t (1996), using mostly personal photos and notes of European and American cities to exemplify and illustrate his arguments.

Given that Garvin describes his favourite places through personal collections of photos, notes and impressions from his travels across decades, his knowledge of the processes involved in the evolution of each city, and their corresponding analyses, is quite strong. As such, What Makes a Great City has the reader feeling as though Garvin is a tour guide to various iconic cities like Paris, New York, Chicago, and dozens of others he knows well.

What makes a good (or great) city is a question that every urban planner and urban designer struggles with. Kevin Lynch took a shot at the question in a talk at the Eindhoven University of Technology in 1980. This is Garvin attempt, drawing from several urban theorists—from Jane Jacobs to Kevin Lynch, Jan Gehl to William Whyte, among many others— to develop his answer and support his argument.

Garvin’s response to the question is straightforward: the public realm. And according to the author, the characteristics of a great public realm are:

From plazas to road networks, Garvin uses a range of scales to describe the characteristics of a great public realm. Characteristics 1 and 2—easier described as accessibility and diversity—are the usual suspects that influence walkability and liveability. These two characteristics, often analyzed at the street scale, are reinforced by characteristics 3 to 6 that add economic, systemic, environmental, and social lenses to the neighbourhood and city-wide scales.

Garvin’s examples of frameworks that nurture and support a civil society were the parts I enjoyed most. Those focused on attracting and retaining market demand, however, serve well to bring in the reality of city governance: planners and designers don’t build cities, developers do. So, how to cater to the needs of developers is extremely relevant to creating the cities with sensitive intention.

One cannot discuss public realm without addressing automobiles. As such, Garvin takes a look at traffic demand management strategies in London and Zurich, and how it helped maintain a vibrant and livable downtown. Solutions such as congestion pricing might be an inconvenient fix, but the growing challenges around traffic demand may require unpleasant measures.

Although there are several strengths to Gavin’s approach, there are also limitations. The book would benefit largely by including examples from Latin America, Africa, Asia, and Oceania. Furthermore, some of the concepts described in the book seem a little outdated. The example of Long Island’s beaches, and how successful they are after thousands of cubic meters of sand were pumped from South Oyster bay (to eliminate the ‘mosquito-infested swamp full of stagnant pools’ that was there before) is largely anthropocentric. It might be good for humans, but less so for other wild and native species from the area. He also writes that public protests should be confined to specific places as a means of minimizing disturbance to others, ignoring the fact that in many cases protests are created in order to disturb people and raise awareness of their cause.

Despite its shortcomings, however, I would recommend What Makes a Great City to smart growth enthusiasts that want to have a more comprehensive view of planning, including traffic management, parking, and systems thinking.

For more information on What Makes a Great City, visit the Island Press website.

Fausto Inomata is an architect from Brazil and is a graduate of School of Community and Regional Planning at UBC.