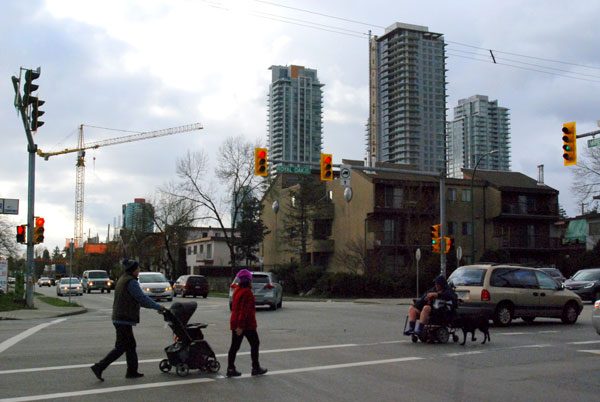 How to Make an Omelette

If you want to make an omelette, you have to break a few eggs.

— City of Burnaby Mayor Derek Corrigan, in response to the displacement of thousands of low-income renters affected by profit-driven rezonings (interview with CKNW)

Sometimes they show up, white sheets of paper posted in the lobby, laundry room, hallway walls, slipped under our doors.  Always turns out to be a fire inspection notice, or a reminder not to flush cat litter down the toilet. For now. Heart slams each time.

Panic has its own pulse.

Demos and towers edge closer to my block.

Cement sets inside, hardens. Bulldozer in my belly.

*For vegans, butter may be substituted with oil or margarine.

Then again, vegans would be frying tofu instead of eggs.

My sister hasn’t eaten eggs in a decade.

Her cardinal rule: don’t eat anything that causes more harm to another than benefit to you.

He boasts a green city.

Natasha Sanders-Kay, 301 – 6730 Burlington Avenue, Burnaby, appeared before Council and spoke in opposition to the proposed rezoning application. The speaker is experiencing stress from the potential loss of her home due to development. Ms. Sanders-Kay relies on her existing support network in her current neighbourhood and does not want to see herself or her neighbour’s [sic] displaced.

*During the meeting, two residents spoke in favour of the rezoning; twenty-seven residents and housing advocates spoke in opposition to rezoning.

No territory acknowledgement was uttered by City Council.

We march. Stop traffic by Metrotown.

Convene outside condo offices on Imperial. Children spray silly string on the COMING SOON sign. Security guard yells. Guys across the street shout at us, Get a job.

Get a job: antipathy’s anthem. One time I heard it amid missing women signs. The guys who said it were lining up for breakfast outside Yolks. In the crowd: mourning families. Frontline workers. Teachers. Activists. Caregivers. Coast Salish leaders. People who labour under bone-crushing burdens, mostly uncompensated. They dream of sleep, but still they rose early on a Saturday to stand in rain, shoulder signs, make speeches, walk on bleeding feet. The guys who shouted: waiting to buy breakfast.

cops crushing our backs, pushing us out of City Hall with riot shields, shoving us out of the building so the Metrotown Downtown Plan could pass in chambers unstained by our drums and chants, stripped of our screams.

Ms. Sanders presented to the Vancouver General Hospital Emergency Room on September 8, 2017, in the company of her AA sponsor, reporting worsening anxiety in context of various psychosocial stressors. Over the last year, there has been increased stress . . . More recently, she found out the area where her rental apartment is has been re-zoned [sic] and she is worried about being evicted from her home. Her anxiety has been worsening over the last 6 months but more acutely over the last few weeks. She has difficulty leaving her home and taking transit . . . she has been advised by her family physician and psychiatrist to come to the hospital for further assessment and treatment.

Look out the window.

I used to calm myself by looking at the great pine by my living room. Would watch the sun flutter through her branches after sunset, during that period photographers call magic hour, when it’s all dancing shadows, dripping gold.

Now I see the Polygon tower through her branches. It’s spread over more and more of a backdrop that used to be sometimes blue sky, sometimes violet cloud or white mist, but now solid grey levels shoot through it, a cylinder-sized bite of the sky. Cranes stretch their metal arms far, wide. Shadows play hide and seek in the gaps and patches between pine needle bristle, wood, and pockets of what’s behind.

The eye of that tower follows me whenever I take a walk. It peeks through the trees in the park by the fire station, a siren lighting the night.

In December I walk through the neighbourhood, snap shitty pictures on my phone, images blurred by snow.

Up ahead: Soy sauce factory. Printers. Houses-turned-antique shop. Warehouses, stores selling chandeliers, carpets, water coolers. Autoshops established in the ’60s and ’70s; the one closest to home is called SANCTUARY.

Kingsway after sundown, walking beside old noodle houses, look ahead:

royal blue sky blackens to ink where the towers are. They wink in the dark, and the glowing eye of the Polygon crane stalks me home.

On my birthday, I find the listing.

Under the RM-4s designation the property can be constructed into a medium to high rise condominium building . . . up to 20 storeys . . . With current Condo pricing surging in this market take advantage of moving price per finished square foot targets and a co-operative municipality that generally supports new development applications.

*Filling could include meat, cheese, vegetables, veggie proteins — again, it depends where you stand. Diets and cost-benefit analyses vary.

With a quick flip of the wrist, turn pan and SLIDE omelette onto plate.

Flip of a wrist — SLAM of a gavel.

My PTSD and anxiety cost me my job, a few days before Christmas.

I’m beat. Too tired for an organizing meeting.

Hold my breath as I hunt for apartments, finding nothing.

I am smashed. Eggshell shards. Where to put the pieces?

NATASHA SANDERS-KAY is a writer, editor and activist based (for now) in unceded Coast Salish territories in Burnaby, B.C.