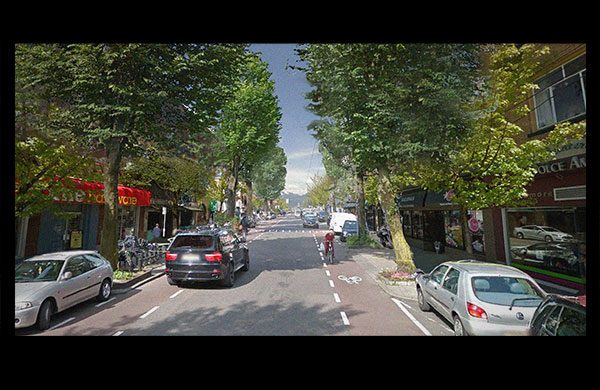 Diversifying transportation options is one of the most pressing issues in urban planning and design circles—the creation and implementation of complete cycling networks being among the most hotly debated.  In Metro Vancouver, we are no strangers to the intensity of the arguments for and against bike lanes—separated or otherwise—and the City of Vancouver’s Transportation 2040 Plan was adopted with some controversy, accordingly.

One of the Plan’s ongoing debates focuses on the creation of separated bike lanes along Commercial Drive and while I was recently walking around the lovely Lombok-Oost neighbourhood in Utrecht, Netherlands, I couldn’t help but notice that the street right-of-way along its main commercial spine—Kanaalstraat—with its great cycling-friendly infrastructure, was quite a bit narrowed than that of Commercial Dr. A quick estimation confirmed that there was about a 20%-25% difference between the two streets from building face to building face.

Despite that fact that Kanaalstraat is narrower it manages to  accommodate two generous sidewalks (along with corner and midblock bulges and ample bike parking!), a parking lane on each side, two well-sized bike lanes and single driving lanes in each direction. All this in the service of creating a beautifully vibrant and safe multi-modal street: safe enough for people of all ages to ride, walk and drive at all hours of the day.

In comparison, Commercial Drive—considered one of Vancouver’s more successful commercial spines, especially at its narrowest between First Avenue and Venables—consists of relatively narrow sidewalks, parking lanes on both sides, and one/two driving lanes in each direction. It’s a street that, despite its local reputation for being pedestrian-friendly, remains clearly auto-dominated. As a result, many deem it unsafe for cyclist (which it is!) and, in turn, are anxious about the possibility of creating bike lanes along it, despite having some of the highest ridership in the city. This has naturally led to apprehension at all levels in following through with the Transportation 2040 Plan‘s suggestion to install separated bike lanes along the corridor—something well captured by HUB Cycling’s recent survey of upcoming election candidate responses (see Question #4).

Given all the controversy around this issue, I wondered how Kanaalstraat would map on to Commercial Drive. This Speculation shows the result—overlaying of Kanaalstraat’s street design within the Commercial Drive’s corridor, just north of First Ave. The intention was to show how a humble and pragmatic reimagining of the Drive can radically improve the quality and function of a typical Vancouver commercial high-street.

***
Erick Villagomez is one of the founding editors at Spacing Vancouver. He is also an educator, independent researcher and designer with personal and professional interests in the urban landscapes. His private practice – Metis Design|Build – is an innovative practice dedicated to a collaborative and ecologically responsible approach to the design and construction of places. You can see more of his artwork on his Visual Thoughts Tumblrand follow him on his instagram account: @e_vill1.