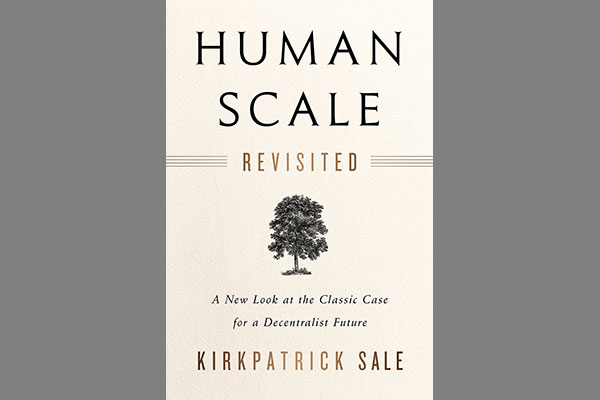 Reading Human Scale Revisited by Kirkpatrick Sale from Athens, Greece during a global health pandemic was, in many ways, the perfect place and time to contemplate the ideas Sale posits. In this new and updated edition of Human Scale (his 1972 title), the author’s thought-provoking arguments serve to sound an alarm at an appropriate time, while providing vital prescriptions for the future—a future when we have all had no choice but to take a collective pause on modern society as we know it and reinvent what our world looks like.

Sale’s central argument is that ‘bigness’ is at the heart of the current predicament. From his perspective, exponential growth has created the current ecological, social, economic, and political deterioration that has contributed to the disarray in our collective societies today.

Human Scale Revisited starts by outlining the nature of the problem, or the “burden of bigness,” with the volume’s first two parts focusing exclusively on the processes and institutions that have brought us to our current crisis.

Sale uses the Greek word “prytaneogenesis” to summarize the damage generated by governments, which should be instead focused on solving problems. He highlights the South Bronx in New York City as a typical example of where post-World War II federal government programs effectively created a modern urban slum, systemic racism, and a “domino effect of neglect and disrepair.”

As states grow in power and size, Sale argues, they do so at the expense of villages and cities. The resulting consolidation of power in political capitals brings a subsequent loss of power in smaller centres; this, in turn, promotes a lack of self-sufficiency and cooperation, in addition to decreased efficiency. He cites the United States Postal Service (USPS) and the US educational system as stark examples of systems where local control has been eroded, creating an ensuing reliance that ultimately justifies their existence. In Sale’s view, cities that grow beyond 100,000 tend to break down. He cites the city of Rome as an example of a lesson on what to avoid with the dominance of the modern European nation-state.

The book’s next three sections focus on solutions available for three main sectors of life: society, economy, and polity (defined as a form or process of civil government; an organized society; a state as a political entity). In the conclusion, he also explores the actions that can be taken by individual citizens to combat the issues in 21st-century urban societies.

Sale argues that a human-scale world is necessary and desirable. Human scale is originally an architectural term also used to describe and organize the design of communities, towns, and whole cities. In practical terms, this means streets comfortable for walking, places for work, play and sleep close to each other, and parks that bring the natural world (grass, trees, and flowers) into our daily lives. Cities can be formed through an interlocking network of these communities, and individuals can be neighbours, not just acquaintances, creators not just consumers and participants, not just observers and taxpayers.

“So to save our planet and its civilizations we must move in an opposite direction, we must work toward the decentralization of institutions, the devolution of power, and the dismantling of all large-scale systems that have created or perpetuated the current crises. In their place, smaller more controllable, more efficient, more sensitive, people-sized units, rooted in local environments and guided by local citizens. That is the human-scale alternative.”

As Sale argues, all of this isn’t just a utopian dream; it is not only possible but was, in fact, the experience for much of human history. To this end, he cites Ancient Greece as a model to emulate—a society that included cooperative movements intrinsic to life in those times. He also explores independent city-states today, including Singapore, Monaco, San Marino, The Vatican, African and Indian Tribes in both North and South America.

Today, Sale suggests, the role of citizens is more important than ever in creating a world where our societies, economies, and politics are in the hands of free individuals and diverse communities supporting the role for racial and Indigenous reconciliation. Both individually and collectively, we have the power to reshape our world to be rooted in local communities and ecological principles.

Human Scale Revisited has many relevant lessons for urbanists. Cities—on the front lines of all current societal ills, including climate change, economic devastation, social and racial inequities, and injustices—need more autonomy and funding to better support the needs of their citizenry.

In a prophetic manner, Sale emphasizes we are at a turning point in world history where the choice is clear: destruction or decentralization. Unforeseen at the time of his writing in 2017, the Coronavirus crisis represents an opportunity to rethink the way society is structured, recognizing that current systems are unsustainable—potentially heralding the much-needed collective awakening upon which Sale’s revisited title is premised.

Since early 2020, COVID-19 has brought with it, among numerous other changes, historic national border closures, economic collapse, temporary clean air, and rising racial justice movements in the United States and worldwide. The pandemic has caused unprecedented upheaval for most of us everywhere. At the same time, however, it also provides the perfect opportunity to hit the ‘reset’ button on building better, more sustainable, and equitable societies.

At a time when global institutions, governments, cities, and citizens are all reassessing how to adjust to a new normal, Sale’s arguments are not only worth taking note of, but heeding. Now is the time when current systems can be perpetuated—or fundamentally restructured.