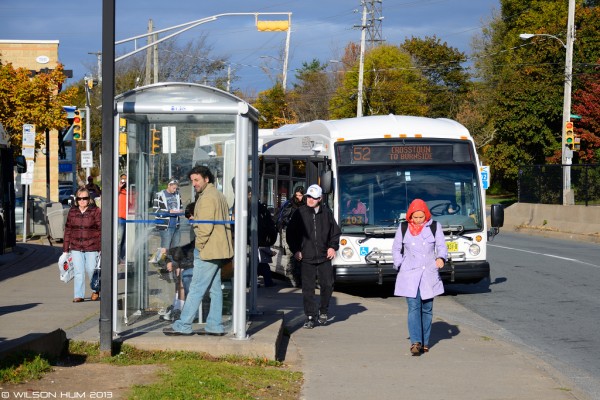 Editor’s Note: On January 8th, Committee of the Whole unanimously endorsed a review and redesign of the Metro Transit Network, based on the Moving Forward Principles. It will proceed to HRM Council for approval next week.

HALIFAX – Halifax Regional Municipality’s transit network should look a lot different in a few years. Metro Transit is advising Regional Council to broaden the scope of the ongoing five year transit plan and to undertake a full system review called Moving Forward, in order to create a new transit network. Metro Transit will propose this review to HRM Council’s Committee of the Whole on Wednesday, January 8th.

My opening Transit First article was supposed to launch in a couple of weeks. I had actually written an opening article, which wasn’t even about Metro Transit. News this big – a proposed network redesign – is so important that I quickly put together a new article.

A lot of public engagement was done by Metro Transit to understand if HRM residents were interested in and ready for big changes to the transit network. In the fall of 2013, over 1,600 surveys were submitted, 135 people attended public meetings, and 25 stakeholder groups were consulted. Metro Transit asked people what should be the primary goals of transit and what kind of services should be available. From their public consultation, Metro Transit learned there was strong support for transit priority measures – like bus lanes – and strong support for a network based on transfers (which can be very useful). There was also support to focus more resources on high ridership routes.

Metro Transit is proposing a review and redesign of Halifax’s transit network based on the following principles.

I was planning on writing several columns about how important these principles could be, but it looks like Metro Transit is moving forward without my prodding. The short version is that Metro Transit’s principles are bold and exciting. A simplified transfer based network could look very different, especially in the urban core. For example, shown below is the current network with many routes laid on top of each other: 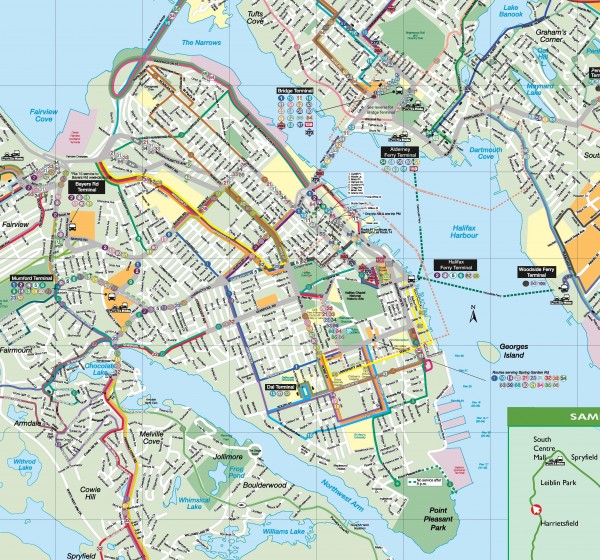 Below is a high-frequency, high ridership example by transit consultant Jarrett Walker, who visited Halifax in 2011 and spoke at an It’s More than Buses event. The heavy bold lines – light blue, dark blue, pink, green and orange – are the high frequency routes. Five routes hit all the major destinations. 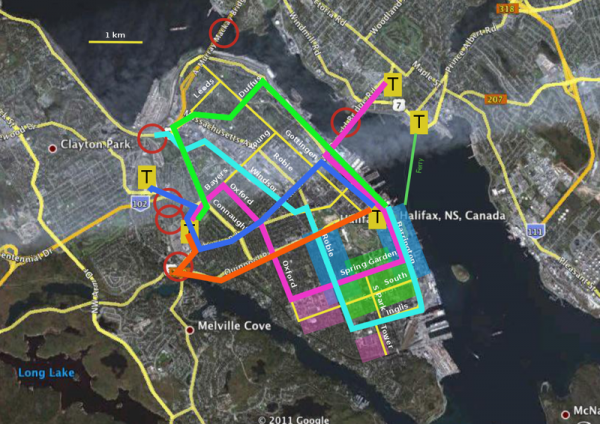 The above network is simply an example of what can be accomplished with a network redesign. But in brief, it sounds like Metro Transit wants to unravel the spaghetti bowl of overlapping routes that is Halifax’s current network, and shift those buses to high frequency routes providing better service. What does that mean? It means we’re a step closer to fast, frequent and reliable transit service. It means we’re thinking about transit differently. I have lots of Transit First columns to write, so today, I’ll skip the details.

For now, Metro Transit deserves a lot of kudos. They went out and spoke with HRM residents, and are proposing bold, transformative principles. On Wednesday, Council has an exciting chance to support these bold Moving Forward Principles and create a new vision for transportation in HRM.