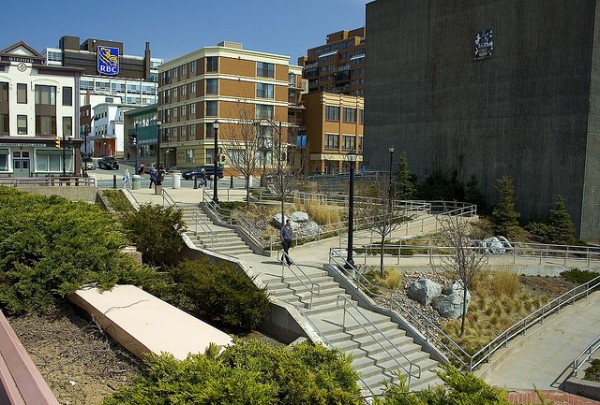 DARTMOUTH – Things are looking up in Downtown Dartmouth. After amending the Dartmouth view planes last year, the Halifax Regional Municipality (HRM) is now looking to establish where taller buildings can be built and what they should look like. The planning review is sorely needed because after several difficult decades, Downtown Dartmouth has become a very desirable neighbourhood and development pressures are mounting. The Darkside is back and the Downtown has been attracting new residents and businesses. Several new developments have been built and more are planned. HRM needs to make the most of the opportunity to nurture Downtown Dartmouth into an even more vibrant, mixed-use centre, and to do that, the Downtown’s increasingly outdated planning rules need an overhaul.

The current review is focused on Downtown Dartmouth’s immediate core. The review doesn’t include the historic residential neighbourhoods of Austenville, Habourview, Hawthorne, Hazelhurst and Park Avenue. The as-of-right height limits are set out in the Downtown Dartmouth Land-Use By-Law. In the Plan, most of the core is zoned Downtown Business, but a few potential infill sites along the harbour are zoned Marine Business or Waterfront. The maximum height permitted in the three zones, as-of-right, varies from 2 storeys to 5, with the main Downtown Business zone allowing for 5 storeys (70 feet) if the top three floors step back. 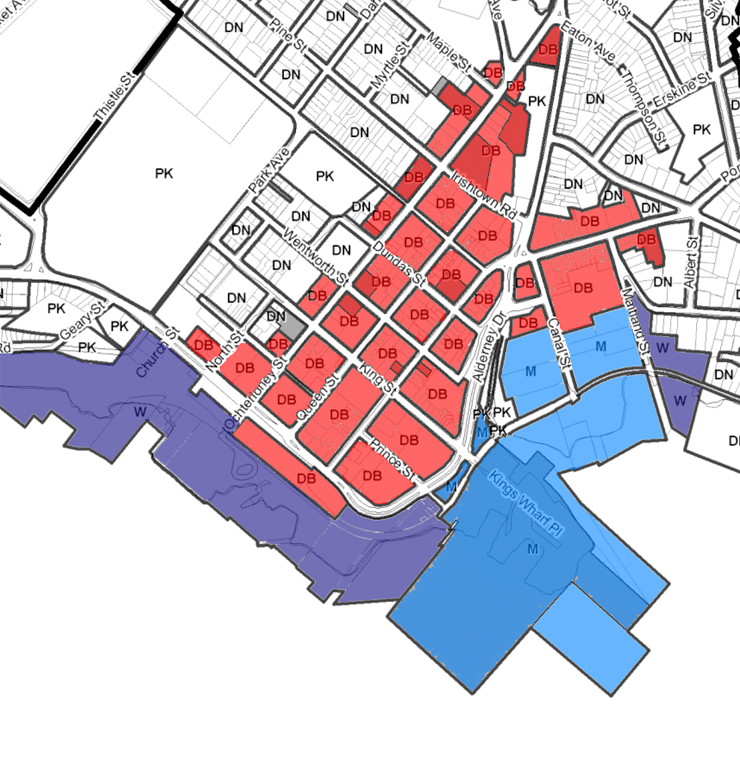 Zoning in Downtown Dartmouth. DB (Red) is “Downtown Business”, W (Purple) is Waterfront and M (Blue) is Marine Business. Darker shades of each colour are areas governed by a Development Agreement – Source HRM

Five storeys is not that tall, but increasing the as-of-right height isn’t practical under the existing Plan’s zoning-based approach. The problem is that zoning is a broad and inflexible instrument that does not readily account for differences between properties. For example, the Waterfront Development Corporation parking lot on Prince Street that borders tall buildings like Admiralty Place, King’s Wharf and the Royal Bank Building can clearly accommodate greater height and density than the Esso Station property at the foot of Sullivan’s Pond, but both are zoned Downtown Business. One size does not fit all, especially in a complex and developed urban area. As a result, most projects in Downtown Dartmouth have had to proceed by way of development agreement. 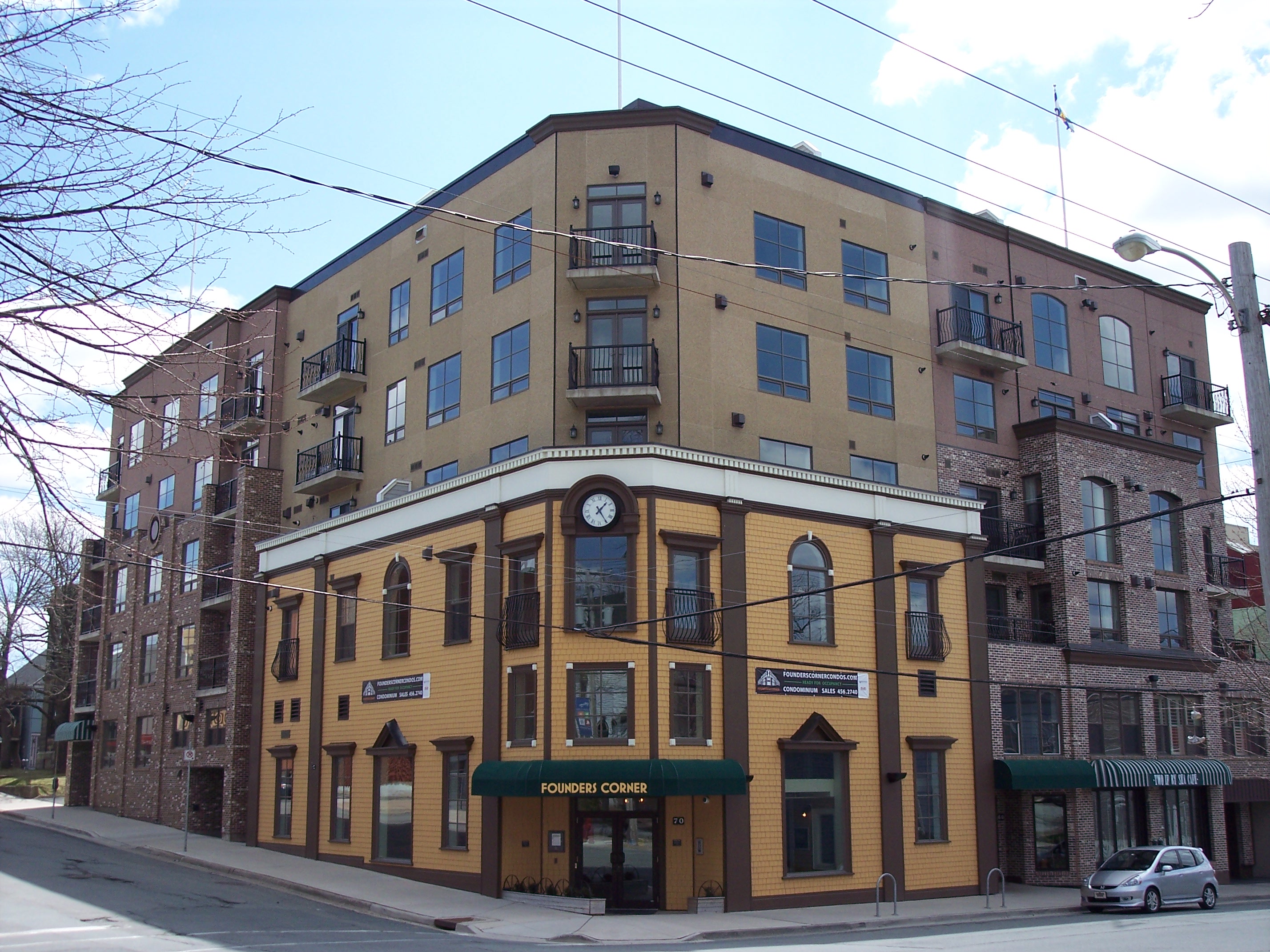 Until recently, the view plane from the Brightwood Golf Course served as a de-facto upper limit on height in development agreements. The Brightwood view plane blanketed almost the entire Downtown core and it was measured from sea level. This meant that properties at the bottom of the hill near the water had the most potential development space above them. On Portland Street, the view plane typically meant an upper limit of 8-12 storeys. Constructing taller buildings Downtown has only been possible in a handful of locations not covered by the view plane, including the Seagate properties next to Greenvale Lofts and the very tip of King’s Wharf. In July of 2013, Regional Council scrapped the Brightwood view plane based on the sound rationale that HRM should not protect views on privately owned property. The result of removing the view plane is that there is now no guidance on where height should go, resulting in a great deal of uncertainty about what is appropriate. A review by HRM is desperately needed. 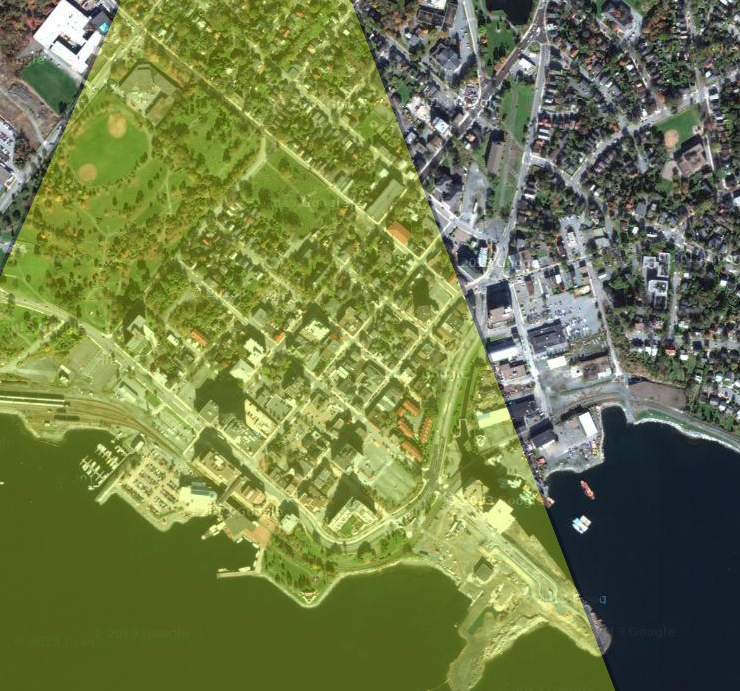 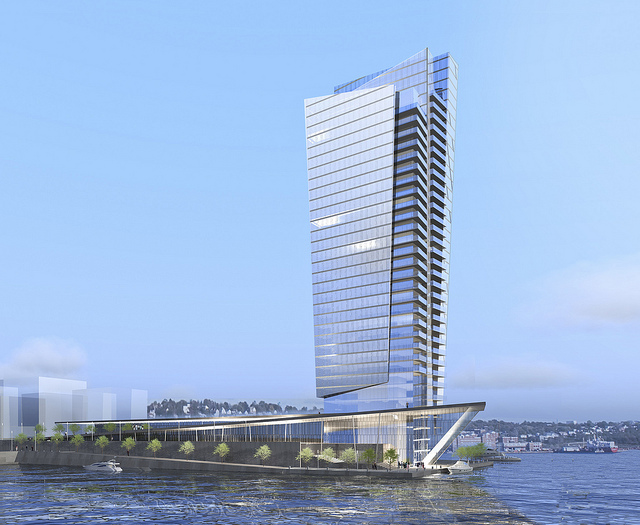 On the urban design side, the Downtown Dartmouth Land-Use By-law endorses a 1992 Façade and Signage Improvement Plan and sets out some general requirements regarding materials, the placement of doors and windows, street setbacks, architectural detailing and a human-scale. There are some good elements in the existing Plan’s design requirements, but they’re very basic and the 1992 Façade Plan is increasingly dated. The importance of the existing design controls has also been weakened by the fact that most projects have proceeded by development agreement. In the development agreement process, design, like height, is just another element that can be negotiated.

Rather than continuing to manage height and design in Downtown Dartmouth by zoning and development agreements, HRM should take the opportunity to generate property-specific height limits and form-based coding. What Downtown Dartmouth needs is HRMbyDesign. On the Halifax side of the harbour, the HRMbyDesign Secondary Plan identified appropriate height limits for every property in Downtown Halifax, providing developers and the community as a whole with certainty and clear expectations. HRMbyDesign also gave Downtown Halifax a contemporary urban design manual and a Design and Review Committee. The manual goes into much more detail than the existing Dartmouth Plan and the presence of a volunteer Design Review Committee that is made up of professionals planners, architects and citizens ensures projects in Downtown Halifax receive expert scrutiny. It’s still early, but the recent surge in construction in Downtown Halifax suggests that HRMbyDesign is working well.

The HRMbyDesign process needs to be expanded to include Downtown Dartmouth. HRM recognizes this and Phase 3 of HRMbyDesign, the Centre Plan, will cover Old Dartmouth as well as the rest of Peninsula Halifax.

Unfortunately, the Centre Plan seems to be falling behind schedule. HRMbyDesign began in 2006 and the target to have the final Phase 3 in place is 2015. If significant progress is made in 2014, it might still be possible for HRM to hit that deadline, but it will be tough. So far, only the corridor study (study of some key streets) has gone forward for public comment and the results haven’t been finalized. The slow pace of change in HRM results in real opportunity costs. Costs in terms of developers investing elsewhere to avoid uncertainty, costs in terms of having to approve buildings that could be better designed and costs in terms of simple community confidence. Dartmouthians are excited to see their Downtown bouncing back, but they want to see development managed well. They want to maximize this once in a life-time opportunity to maintain the best of the past while incorporating the future. Rather than tinkering with zoning and design requirements, HRM needs to be bold. The upcoming review needs to be the launch of the Centre Plan process in Downtown Dartmouth with a goal of settling what height is appropriate where and establishing a design manual to ensure good architecture.

The public process for the plan review begins Monday January 13 at 7:00 with a public information meeting in the Helen Creighton Room in Alderney Library.