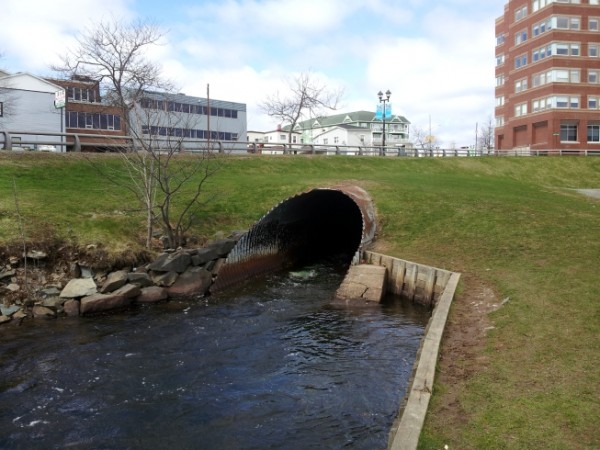 DARTMOUTH – After 17 years of planning, construction of Dartmouth’s Canal Greenway is about to begin. Unfortunately, what’s now planned is a far less interesting space than originally envisioned. Conceptual plans for the Greenway were completed in 2002 and 2006 and, although they differed in a few details, both had a consistent vision composed of four main elements; (1) heritage interpretation, (2) a multi-use trail, (3) a daylighted Sawmill River and (4) a new playground. Details in the concept plans needed to be further refined, but this core vision was supposed to carry forward and guide the park’s development. That vision, however, is on the verge of being significantly watered down. In a recently released site plan, the daylighted waterway and playground have vanished and the trail has been relocated to the edge. Only the heritage elements remain. The decision to abandon the original vision has been made without any public discussion or explanation. This process lacks any kind of participatory involvement and is unlikely to produce a park Dartmouthians will love. 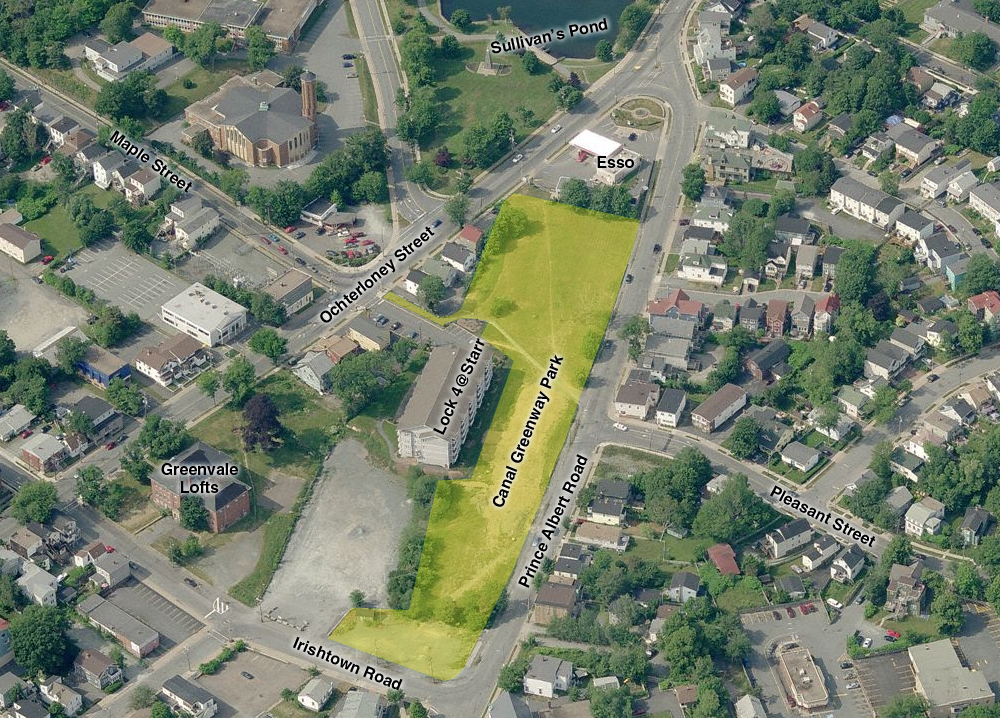 Designing Public Spaces
Designing public spaces is something that planners often get wrong. Spaces that are filled with people in an architectural rendering are frequently devoid of life in reality. To be well-used, a space needs a purpose, it needs to be inviting and, crucially, it needs people. Empty spaces repel us while bustling spaces attract. Danish architect Jan Gehl notes that, to increase the number of people using a space, you can increase the number passing through or increase the length of time that people stay. Slowing people down is often the easier approach and, as a result, spaces that provide a diversity of experiences tend to be more successful, especially in smaller cities. So how do the changes to the Greenway impact the type of space that will be built? Will the new plan create a lively park? 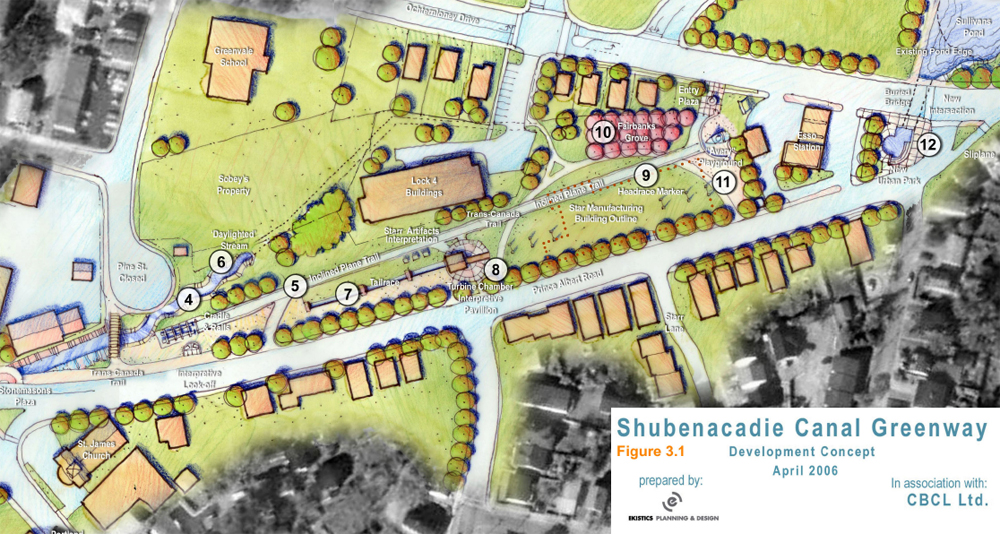 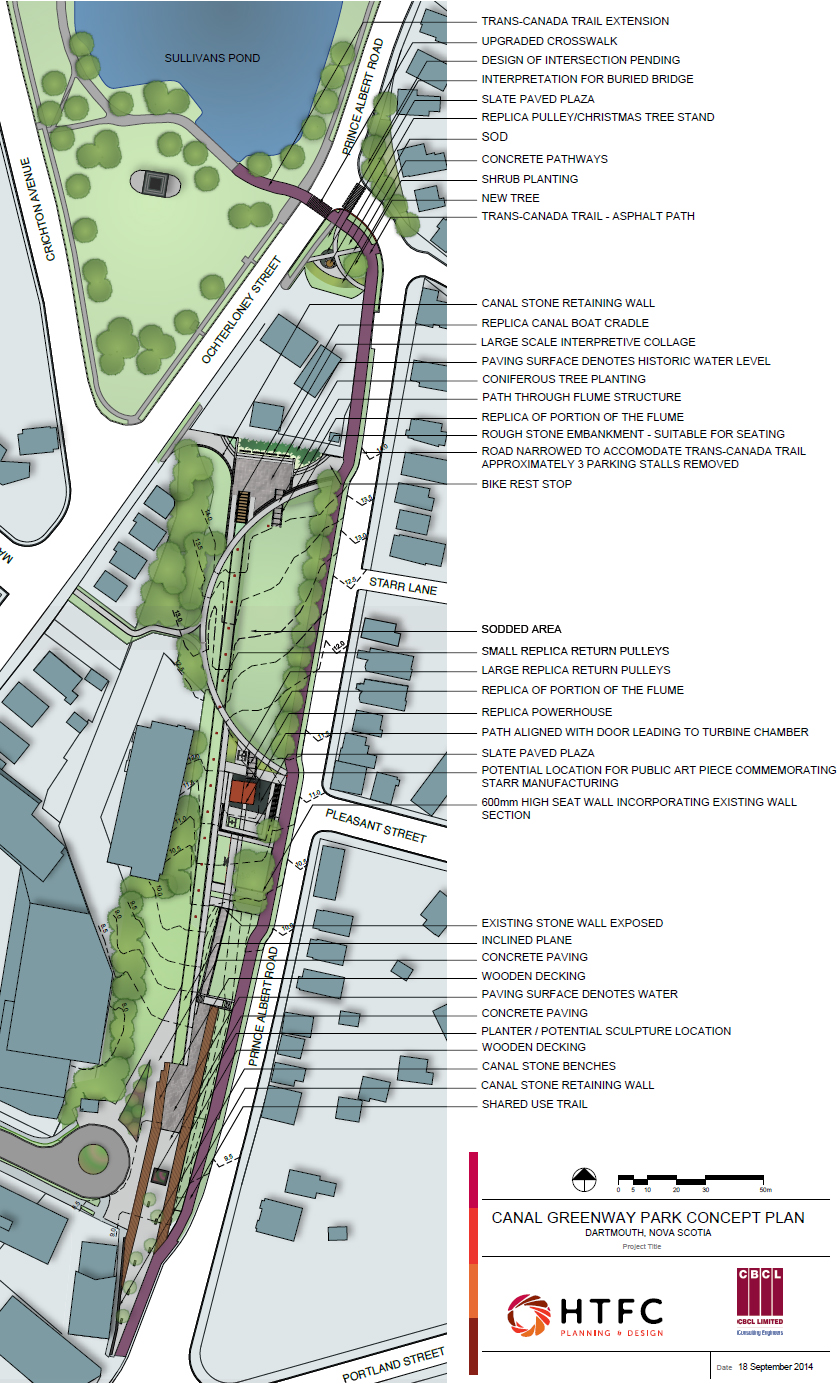 From Multi-use Park to Outdoor Museum
With the loss of the waterway and playground and the rerouting of the main trail, the new plan for the Greenway is, primarily, about heritage interpretation. The Canal Greenway is a key historic site, having once been an aboriginal canoe route, a segment of the Shubenacadie Canal and, finally, Starr Manufacturing where the skates and sticks that made modern ice hockey possible were produced. The exposure of the old stonework and the reconstruction of the Starr power house, boat cradle and incline plane will be wonderful additions to the Greenway that will visually tell the story of the site.

Unfortunately, it’s difficult to design successful public spaces that are based on heritage interpretation alone. Since heritage interpretation doesn’t change and isn’t a regular activity in most people’s day-to-day lives, it doesn’t usually create repeat visitors. Halifax’s Citadel Hill is a good example. As a major museum, Citadel Hill attracts hordes of tourists, but relatively few locals. Instead, locals use Citadel Hill for recreation including running, sunbathing, tobogganing and outdoor events. It takes a large and steady stream of tourists to make Citadel Hill’s heritage interpretation successful. The key question is, will the Greenway’s heritage elements alone generate enough interest to create a lively public space? It seems doubtful. To be well-used and loved, the Greenway needs to both serve some of the daily needs of the local community and interpret the site’s significant heritage.

The Missing Elements
Sadly, the lost playground and daylighted river were the two elements in the original Greenway vision that had the most potential to create repeat visitors while also slowing people down and holding them in the space. Playgrounds bustle because they’re a key part of daily life and they’re spaces where people stop for relatively long periods of time. A well-designed and well-situated playground is a fantastic asset that brings swarms of kids and accompanying adults. The Greenway playground was to be built in the style of one of the old canal boats to create a focal point at the top of the site and provide some symbolic heritage interpretation. Losing it greatly diminishes the park’s appeal.

Boat playground at the top of the Greenway in the 2006 plan. Plaza with replica cradle and interpretative collage in 2014 plan.

Water is another dynamic element. It changes with the weather and light and brings nature into the city. People seem to be hard-wired to congregate by waterways and throughout the world they’re popular places to stroll along and relax by. The vision for the Greenway included a daylighted Sawmill River through at least a portion of the park and it held out the possibility of reintroducing water to some of the heritage elements where it once flowed, notably the tailrace. All of this, however, has vanished in the 2014 site plan. Leaving the Sawmill River buried underground makes the Greenway a much less interesting space and negatively impacts the significant efforts put into heritage interpretation. The entire reason the Greenway is historically significant is because the Sawmill River made the Canal and Starr plant possible. Without water, it would not be an important property. Marking the waterway’s former course with decorative pavers while leaving the real thing buried underground is not very compelling.

Daylighted waterway in the lower half of the Greenway and tailrace in 2006 plan. Multi-use trail (purple), benches, and decorative paving (grey) to denote historic waterway in 2014 plan.

A multi-use trail is another one of the Greenway’s key components. A trail through the Greenway will link the existing Lake Banook and Harbour systems and will be a major asset for walkers, runners and cyclists. The original vision routed the trail through the middle of the Greenway, symbolically representing the incline plane’s historic presence. Relocating the trail to the edge takes the Greenway’s liveliest remaining element and pushes it to the periphery. Rather than passing through the park, the trail is now, essentially, a wide sidewalk along Prince Albert Road. How big an impact this has is really dependent on how the rebuilt plane is surfaced. If the materials selected are still attractive for active transportation users, than the plane could still function as the defacto main path. The plane appears green on the site plan and grass would be a terrible material to choose. A final decision on surfacing, however, hasn’t been made.

The loss of the playground and waterway and, potentially, the relocated trail has transformed the Canal Greenway in the 2014 site plan from the originally envisioned multi-use park into an outdoor museum. The new space will have some great heritage curiosities, but its regular everyday use will be by people passing through. This is not a recipe for great public space and this is not the original concept.

How Did We Get Here?
So how did the plan for the Greenway get scaled back when the original vision was supported by public consultation and was accepted by Harbour East Community Council? How did we get from dynamic multi-use park to outdoor museum? Developing the Greenway has been a partnership between the municipality and the Shubenacadie Canal Commission. Halifax has provided the land, staff and cash while the Commission has contributed heritage expertise. Harbour East Community Council approved the 2006 vision as the “preferred direction” for the park in March 2008 and later presentations to Council by HRM staff and the Commission referenced the playground and daylighted waters. The departure from the vision is a relatively recent decision. I asked the municipality’s project manager, Terry Gallagher and Bernie Hart with the Canal Commission what happened. 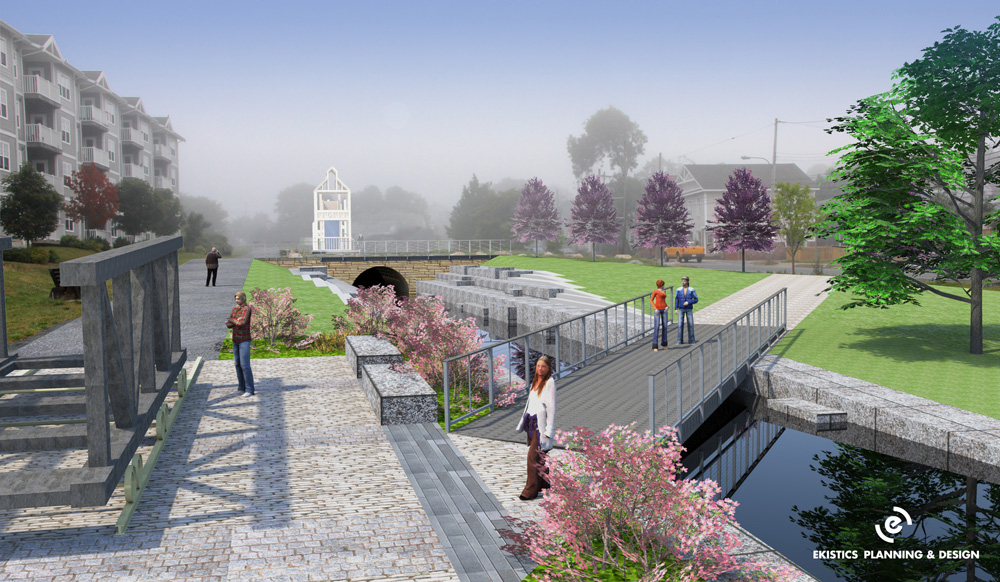 Image prepared by Ekistics and presented to Council by Canal Commission in 2011 showing an evolving concept that is still consistent with established vision. Water in the tailrace, multi-use trail and replica boat cradle. Rebuilt powerhouse in distance.

In Need of a Champion?
Daylighting is probably the Greenway’s most complex element. The Canal Commission strongly opposes daylighting through the upper portion of the Greenway because of concerns that it would destroy the archaeological remains and the reconstruction of the incline plane. The Commission would, however, support daylighting in the lower portion of the Greenway or an alternate route around the Lock 4 Condominium. The municipality says that since Halifax Water owns the pipes, it’s up to the utility to decide. As a utility, Halifax Water has a narrow mandate for managing storm water and that mandate doesn’t include building parks. The result is that it seems like there is no one on the inside of the Greenway’s planning process to champion daylighting and it’s, therefore, not surprising that it has disappeared from the site plan. It’s unfortunate.

In December, in response to a campaign by the Ecology Action Centre, Harboureast Community Council asked for a staff report into daylighting Sawmill River. The renewed interest in daylighting suggests that the community remains interested in at least one of Greenway’s missing elements, having water flow through the park. As the owner and developer of the Greenway, the municipality should be leading the effort to daylight Sawmill River, not preparing site plans that rely on decorative pavers to mark the waterway’s former route. Given the renewed interest in daylighting, it makes no sense to scale the vision back.

Too Many Playgrounds?
The municipality indicates that the playground was cut because there are already enough in Downtown Dartmouth. Maybe, but, apart from Alderney, all of the nearby playgrounds are fairly modest. What was envisioned in the Greenway was a unique boat structure that would be a destination for parents and kids. Substantial growth is planned in Downtown Dartmouth at King’s Wharf and Dartmouth Cove, which are both mere blocks away from the Greenway. To house more people and attract families, the municipality needs to provide the necessary amenities. If a playground truly isn’t needed, it still shouldn’t be dropped from the plan without considering the role it played in the original vision. The playground was one of the park’s liveliest elements that would draw locals and fulfill day-to-day recreation needs. If it’s going to be cut, it should be replaced with something with similar attributes to maintain the diversity of uses in the park.

The Incline Plane:
Finally, the municipality reports that the trail has been relocated to allow a more historically accurate recreation of the incline plane. Rather than recreate the plane’s approximate slope and pave the route for the main multi-use trail, the new site plan opts for less modern materials and the installation of replica pulleys. The plane is certainly important for understanding the site’s history, but is it worth rerouting the trail for? All that’s left of the original is a section of ironstone bed and a pair of foundation footings in the lower end of the Greenway. Relocating the trail takes a lot of life out of the park. It’s a lot to give up.

Who Decides?
At the heart of the changes to the Canal Greenway vision is the question of how public space gets designed and built. The 2006 vision for the Greenway was supported by public consultation and was approved by community council. The conceptual plan was suppose to guide the park’s development, but its core elements are not reflected in the latest site plan. The result is a much less interesting space. These decisions are being made in private with no public discussion or explanation. This is not a good way to design and build public facilities. The people who are actually going to use a space should inform its design. If the vision for the Greenway is going to change, then the public should be consulted. It would be a mistake to implement the watered down vision of the Greenway without knowing whether the community supports the changes or not.