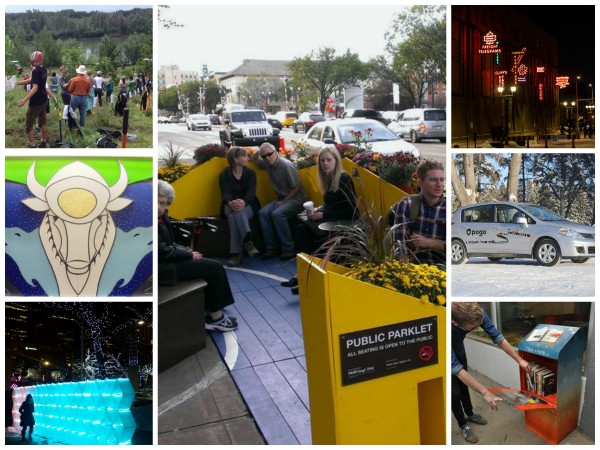 Editor’s note: I know it’s a bit late to be posting a 2014 review… but whatever! Spacing Edmonton’s blog was on break during the winter holidays to rejuice for 2015. In case you missed them, check out these great 2014 lists made by Mack, Fish, and Paula.

It’s been nearly two years since our launch in 2013 and, since then, we have seen more and more public discussion around urbanism in Edmonton! As a result, Edmontonians have invested their time and energy into great projects in an effort to improve the quality of life in our communities. Here, we highlight 10 examples from 2014 that accomplish just that.

Organized by the Drawing Room, Edmonton had its first Park(ing) Day where tiny parklets extend from the sidewalk into parking spaces. This is part of an ongoing movement to promote the extension and enhancement of our public spaces along car-dominated streets. Spacing Edmonton and the City of Edmonton were among the many participants for this event featuring croquet, a tea party, confetti showers, and much more!

Meanwhile, on Whyte Avenue, a parklet designed by landscape architect Jonathan Behnke was constructed as a temporary memorial for Isaak Kornelsen. Unfortunately, these parklets were only installed for one day but we hope to see the City allow for more permanent spaces.

Championed by Annalise Klingbeil through the Oliver Community League, little free libraries have popped up throughout Oliver this year. These repurposed newspaper boxes provide access to a wide selection of books out in our parks and streets. Visitors are welcome to drop off and pick up books for their free enjoyment. This successful initiative spurred other communities to start their own little free libraries with one in front of the Downtown Community League and even a microbibliothèque in the French Quarter!

Through the Works Society, local artist Dennis Lenarduzzi created the McCauley art banners along 95 street and Little Italy. Lenarduzzi’s imagery features the Italian alphabet that references classic Italian posters. The graphics add much-welcomed play and colour to the streetscape. Now if only those sidewalks can be widened…

This past year, the citizen-led Edmonton Wayfinding Group pushed the City to finally install wayfinding prototypes around Churchill Square. These signs contain maps, directions and time estimates to nearby destinations to help disoriented pedestrians and visitors get around in the downtown core. These wayfinding signs are perhaps the best we have seen in Canada in terms of design and we hope to see them implemented throughout the city in the near future. Read more about the project and its history in Mack Male’s post.

This significant work by Aaron Paquette and Sylvie Nadeau in Grandin LRT station coincides with the Truth and Reconciliation Commission to acknowledge the injustice and harms experienced by the Aboriginal peoples and to move towards a better future. Stemming from this ongoing process, there is a strong movement to better reflect Edmonton’s indigeniety in the landscape. Fish Griwkowsky provides wonderful commentary on this art piece:

In a league of its own, Aaron Paquette’s sprawling, multi-panelled Stations of Reconciliation is a brilliant, colourful and meaningful response to long-brewing criticism of Sylvie Nadeau’s Grandin LRT mural — which some people argued glorified native children being separated from their parents by religious figures into the horrors of residential schools. Working with Nadeau to expand the timeline of the aboriginal story to 10,000 years, Paquette’s white buffalo stares directly across the platform, each artist’s work reflected in the other. It’s extraordinarily thoughtful, down to the native-borrowed colours Hudson’s Bay used to market blankets to their new customers.

With more businesses and communities eager to celebrate the winter beyond the holiday season, we have definitely brightened our long hours of darkness this year! For instance, it’s amazing how much a difference a simple tree lighting will do for 104 Street. Another example is Chris Vander Hoek’s unfortunately short-lived light installation in front of the Winspear, which provided a fun interactive experience for passersby. And lastly, whether you like or not, the lighting up of the High Level Bridge has attracted the hearts of many. It will be interesting to see what artistic programming will be done for the bridge – perhaps one could be a neat display resembling piano keys being played?

Led by Dustin Bajer with the help of over 50 volunteers, Edmonton now hosts a food forest of 3,600 plants provided by the City in MacKinnon Ravine. A variety of tree and shrubs were planted including gooseberries, saskatoon berries, pine cherries and cranberries.  The food forest is self-sustaining and requires very little upkeep, adding beauty and biodiversity to the magnificent river valley.

Some cities have big carshare companies like car2go or Zipcar. But entrepreneurial Edmonton just makes its own! Pogo Carshare launched in October with 20 cars, and signed up 350 users in its first two months of operation. Plans for 2015 include expanding to 50 cars in the next several months, and 150 by the end of the year, plus an expansion of the “home zone” where cars can be booked and left. Maybe it’s more of a company than an urban intervention, but the difference a successful carshare will make to the ability of urban Edmontonians to give up personal car ownership could be huge.

Although not new to Edmonton this year, warming huts are becoming increasingly popular for the winter. Back in January of 2014, Dustin Bajer and I submitted an entry, made of old Christmas trees, for the Deep Freeze Festival and proved to be a popular hit with festival goers. We look forward seeing more being built at the University of Alberta grounds for 2015!

Back in February, 104 Avenue became host to another way to light up the night, the outdoor Edmonton Neon Sign Museum! In 2006, City of Edmonton heritage planners became worried about the loss of the city’s neon history through demolition or renovation of buildings. Not knowing what exactly they would do with them, they started collecting and storing old signs as they became available. By 2014, partnerships with the Alberta Sign Association and Telus allowed the museum to launch with an initial 8 restored signs on the east wall of the Telus switching station, another example of entrepreneurial Edmontonians making cool stuff happen.