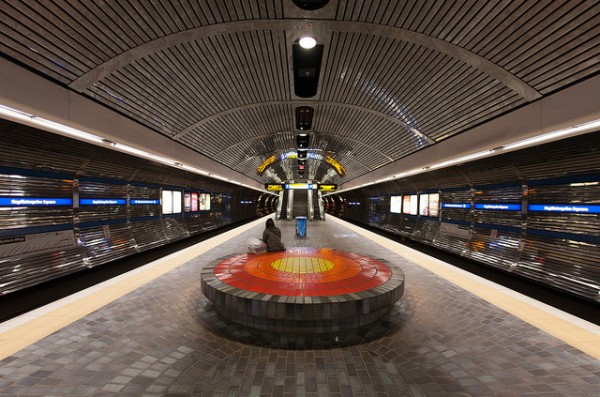 Following the first part of this series, the second round of the transit strategy public meetings took place on November 17th and 18th. The purpose of these meetings was to have participants prioritize the guiding principles of the strategy; with the aim of presenting specific goals to City Council at some point in 2017. Since the strategy is still in it’s earliest phases, this is a good opportunity to continue the discussion of what an ideal Edmonton Transit System will look like when the process is completed.

Back in November, I talked about a radical redesign of our transit system; a plan that eliminates many low frequency, circuitous routes in favour of frequent service on the citywide grid of arterial roads. It might seem counter intuitive but with a system like this we will end up serving outer suburban neighbourhoods far more effectively than with the current system; filled with duplicated routes and a confusing service map. Although potential riders would not necessarily have a stop in front of their house, routes on the major roads would have frequencies increased to every 10 minutes or more; meaning that riders would no longer need to look at a schedule and transit could provide a viable alternative to private car use. Such an approach has been used in Toronto’s inner suburbs for decades and as a result, suburban ridership has been the envy of North American transit systems.

During the previous round of transit study meetings, these ideas were brought up by many participants but, predictably, the thought of removing some neighbourhood bus routes provoked resistance from certain attendees. It might be tempting to dismiss these reactions simply as fear of change but as the best public transit is a service for all citizens, it’s important for transit planners and advocates to understand why objections are being made so that major network change does not unintentionally worsen the transit experience for some.

The opposition to a reorganized bus network came from two major sources at the meetings. The first were disability advocates, pointing out that many arterial roads outside the central core are unattractive for pedestrians. Even where adequate sidewalks and/or trail infrastructure is provided, it is often incomplete or situated next to areas of high traffic speed/large amounts of commercial parking. Thus, the neighbourhood bus routes, as low frequency as they may be, are a lifeline for many and their elimination could leave riders, especially those with disabilities, stranded. Secondly, several participants pointed out that most primary and secondary schools are located within residential areas and the routes that travel through residential areas are a way for students to arrive at school safely. To these individuals, having young people walking long distances from major roads creates health hazards from our city’s harsh weather and the added risk of traffic.

Both of these arguments are very persuasive and bring up a larger discussion of who a transit system is meant to serve. In fact, there is a strong tradition of advocates who see transit primarily as a social service and as such, trying to lessen a city’s car dependence through route redesign and frequency at the expense of what are called ‘coverage’ services distracts from transit’s primary mission. In my previous article, it would appear that I dismiss these arguments and nothing could be further from the truth. However, I do think that opposing potentially game changing network improvements in the name of providing specific service to targeted demographics misses the overall point of what reducing car use can do to improve a city overall.

To begin with, no transit system (aside from those operating only commuter services) completely abandons neighbourhood and coverage routes, the question is simply what proportion of resources to we wish to devote to them. In fact, if a city as large as Edmonton does not shift resources away from purely coverage routes, the very populations they are meant to serve could potentially become more and more excluded from a city ever more car dependent. This is because the reasons that vulnerable people are in danger on main roads is the lack of attention given to the safety and access to destinations for all pedestrians, whether they are trying to board transit or not. If we continue to accept the fact that the majority of residents will be drivers then there will be few advocates for the pedestrian experience, which will leave seniors, young people and those with mobility challenges even more excluded. In contrast, if we invest in improved transit that grows ridership, rather than simply trying to serve each distinct population, the entire city stands to benefit.

This being said, having city planning involved in all levels of the transit strategy as it advances would be a major improvement. It’s difficult to argue that focusing transit service on major roads is better for everyone when certain arterials have inadequate bus shelters or sidewalks. The increased frequency should ideally be linked with a major bus shelter improvement program and an effort to make sure all roads have sidewalks, timely snow clearance and provision for disabled people. In the longer term, if this strategy results in higher ridership, an effort can be made to ensure future developments on these suburban roads have entrances facing the street and proper sidewalk linkage to bus stops. Currently, the City makes a great effort to promote transit oriented development near existing and future LRT stations but unless the entire urban area is slowly but surely improved from a pedestrian standpoint, transit network improvements will continue to be opposed by well meaning activists who fear those they fight for will be excluded from urban life.

Additionally, it should be emphasized by all of us promoting a frequent arterial bus network that not all neighbourhood routes will be eliminated and for areas where this does happen, the overall improvement to the transit network should be pointed out and safe routes for individuals trying to exit their neighbourhoods to reach the improved routes must be provided in all cases. By doing this, and by showing the benefits to all that a renewed transit culture brings, we can hopefully avoid the angry debates that can arise when major change to the transit network is considered.