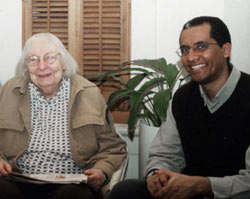 Amanuel (“Aman”) came to Canada in 1993. Originally from Eritrea, Amanuel came to Canada with hope of creating a more stable and peaceful life for him and his family. A lecturer and former Head of the Marine Biology and Fisheries department of the University of Asmara, Aman is an immigrant – who sees that a new Toronto must include the best of the ‘old’ world, and the new. He brings a tremendous sense of grace and respect for valuable traditions, but also does not hesitate to question the ongoing relevancy of certain practices and institutions. He has done extensive community work since his arrival to Canada, including helping to found the Eritrean Canadian Society for Youth Advancement. Aman is a strong advocate of immigrant communities making an effective transition in to Canadian life, believing firmly that they must rise above any conflicts they have brought with them. Having lived with in a war torn country for many years, Aman exhorts settlement communities to put aside their divided pasts, and has spearheaded various efforts to settle conflicts and encourage newcomer communities to engage in Canadian life. Often plagued by fragmentation and competing agendas, Aman has been able to forge new partnerships within the African settlement community in particular.

In addition to Aman’s involvement in his local Toronto and newcomer communities, Aman helped found and chaired Canadians for Peace and Development in Eritrea, a Toronto-based non-governmental organization advocating for a peaceful and just settlement of the war between Eritrea and Ethiopia.

Aman’s community development work has included actively volunteering in grassroots organizations committed to immigrant youth development, suicide prevention, social justice and community peacebuilding. He is an avid user of electronic technologies, and has incorporated them in to his various community building and advocacy efforts.

Currently, he is the Manager for Community Action at the Family Service Association of Toronto, and volunteers as a member of the Board of Toronto Distress Centres, Co-chair of African Canadian Communities Social Development Council and is the Vice-President of the Community Social Planning Council of Toronto. He is also a deep sea diver, and holds a Masters degree in Applied and Fundamental Marine Ecology from Vrije Universiteit in Brussels. Prior to coming to Canada, he spent ten years in research and academia in countries such as Eritrea, Mauritius, Kenya, Bahrain, Saudi Arabia, Italy, Germany, Belgium and the Netherlands.