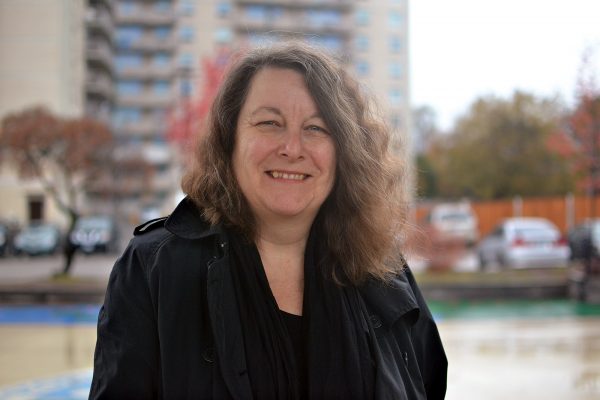 In 2004, Jane Jacobs published Dark Age Ahead, a sobering warning that North America in general (and Toronto in particular) was in danger of losing valuable elements of our culture. In the intervening years, her dire predictions have been coming true: families need help. So do small businesses, new Canadians and many other segments of Toronto society.

“When human beings are nurtured, efficiencies and economies of scale don’t apply,” she wrote. “Helping individuals become acceptable and fulfilled members of a culture takes generous individual attention to each one, usually from numerous people.” But how can we as a city afford to give this kind of attention to everyone who needs it?

About the time that Jacobs would have been starting to write Dark Age Ahead, a community worker with an unusual background was answering a small classified ad in the Toronto Star. Holding educational credentials in Early Childhood Education, Social Development Studies, and Business Administration, Anne Gloger already had experience bringing together churches, school boards, and recreation centres to create after-school programs in Kitchener, plus two years running the family resource program at the 519 Community Centre. It was perfect training for the founding director of what would become the East Scarborough Storefront/Centre for Connected Communities, a revolutionary model for service delivery in the underserved East Scarborough community of Kingston Galloway Orton Park.

Gloger answered the ad, which offered a $5,000 contract to someone who could co-ordinate a community service-building project spearheaded by a collection of agencies in Scarborough. “I went to the first meeting; I thought ‘a 40-organization coalition? This is going to be one of those really disorganized meetings!’ she recalls. “I was so surprised to find that this was a super-functional group of people who were really creating something, so I jumped on board.”

The first iteration of the project was a service-delivery hub in Morningside Mall. “In four years, it went from no money and me and a desk to 2005, when there were four of us with maybe $400,000 a year,” Gloger recalls.

But the following year, opportunity came knocking in disguise when the primary funder changed its model and the Morningside Mall announced that it would be tearing down the building. This is when Gloger’s talents really began to be tested.

“Right from the get-go we designed something called a Community Speak — a bit like a focus group,” she says. “Anywhere from 40 to 120 people were coming together to eat dinner and grapple with whatever issues were brought forward. They staged a protest march, which in East Scarborough — well, I’ve never seen something like it before or since: placards, banners, close to 300 people. Children from Horn of Africa [a parents’ association], seniors from Vasantham [a Tamil seniors’ wellness centre]; street-involved youth leading the march. Everyone was there.”
The resulting media coverage and a funding campaign by the partner organizations created the impetus to move the hub into the old 42 Division police station in 2007. “We were given a mandate to work with the community,” she says “to help make this neighbourhood thrive socially, economically, and physically.”

A community design process brought together architects, planners, and designers to mentor local youth to redesign the building. Then the youth mentored adults in Tower Neighbourhood Renewal, a project to rethink the surrounding area, which now includes sports facilities supported by Maple Leaf Sports and Entertainment and the “Sky-O-Swale”, a shaded community gathering space that also collects rainwater for a green roof and a community garden.

Today, the East Scarborough Storefront is still a hub for service delivery by numerous organizations, but it’s also pursuing further neighbourhood redevelopment, as well as economic development through East Scarborough Works, and youth engagement and empowerment through Sport for Change and KGO ACT. The through-line for all these activities is what has become known as the Connected Community Approach, a unique place-based approach to community development that focuses on leveraging a community’s assets for the good of the community.

“The Storefront is more than a one-off, it is a model for how places can develop in neighbourhoods across the city and around the world that give the community a platform for self-determination,” says Margie Zeidler, creator of the vital art space 401 Richmond [disclaimer: Spacing is located at 401 Richmond].

Zeidler describes Gloger as “a consummate leader: someone with a vision for how the world could be — better than it is now. She is able to stand in the background and give others the courage and determination to create their visions for the future and thereby develop the community’s future leaders.”

Jacobs “felt that people had the right to self-determination and to create the kind of neighbourhood they wanted,” says Zeidler. “It shouldn’t be left to the experts, who swan in and bring preconceived notions of what the neighbourhood should be. Jane Jacobs would have loved to meet Anne Gloger and go to the East Scarborough Storefront.”

profile by Sarah B. Hood