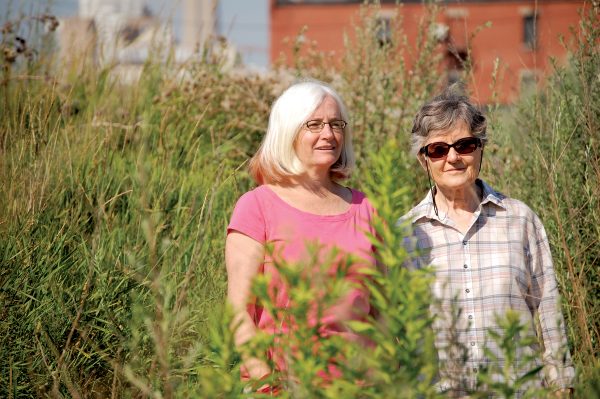 The Waterfront Warriors: ‘They are committed to humanity, to the city, and to people not as privileged as others’

Julie Beddoes and Cynthia Wilkey are “process queens,” declares waterfront activist Dennis Findlay. “They know everything about process; they can quote statutes right off the top of their head!”

“They’re smart, they’re honest, they’ve got integrity, they’re persistent — which is always very important,” says John Campbell. He is president and CEO of Waterfront Toronto, the group that oversees every aspect of the redevelopment of the lakeshore, from the Don Valley to Exhibition Place. It’s these values, among others, that elevated Beddoes and Wilkey to become community leaders in the massive redevelopment of Toronto’s waterfront.

In 1975, lawyer Cynthia Wilkey arrived from Woodstock, Ontario to a Toronto that was, she says, “a hotbed” of progressive politics and community action. “I had never experienced that level of civic engagement.” Working with Cabbagetown residents of rooming houses and social housing who were being forced into even more precarious living situations by gentrification awoke her to “systemic causes of disentitlement,” she recalls.

Wilkey formed a tenant’s association and fought to found a non-profit housing co-op when her own home was jeopardized by development. This led her deeper into neighbourhood activism, and in 1997, she became a founder of the West Don Lands Committee (WDLC), which she still chairs.

Moving to Toronto from England in 1966, Julie Beddoes says she “realized then that I should have been born here.” After a long absence in the ‘90s, “when I moved back, I just wanted to swallow the city whole!”

She drifted into activism when she started attending public meetings about the future of the Port Lands, where she soon noticed “how effective it was to represent a group and not just be an individual.” So she founded the Gooderham & Worts Neighbourhood Association, of which she is still a board member, and got even more involved in waterfront advocacy.

“The West Don Lands Committee was created in 1997, because the Province had put the land up for sale and was about to sell it to a harness racing consortium,” says Wilkey. No sooner had that proposal evaporated than the 2008 Olympic bid process sprang up, changing the City’s focus.

Through a federal grant, the WDLC was able to commission a study to explore whether the area could be developed according to the community vision, taking into consideration the need for flood protection and soil remediation. By the time Robert Fung was appointed to head a Toronto Waterfront Revitalization Task Force in 1999, the Committee had already carried out extensive community consultation and research.

“We arranged to meet with them; we gave them the economic model, and we said the West Don Lands are ready to go,” Wilkey says. In 2000, “when the Task Force report came out, they recommended the creation of Waterfront Toronto and they recommended four quick-start projects; one of them was the West Don Lands.” Beddoes and Wilkey praise Waterfront Toronto for its openness to the passionate outpouring of community input, which has continued to shape redevelopment plans.

Along the way, there have been wrinkles — like Doug Ford’s 2011 idea to scrap the Waterfront Toronto plan in favour of amenities like a Ferris wheel and a monorail (Beddoes was active in the formation of CodeBlueTO, an advocacy group set up to address that challenge). The Pan Am and Parapan Am Games provided a new framework for construction of affordable housing. Wilkey sits on a stakeholder committee that has ensured that the Games’ legacy includes social goods.

“Julie is a dogged activist. She’s also remarkable as a speaker; she can really catch the mood of a public meeting and turn it around with a few words,” says Don River activist John P. Wilson. “Cindy is an extremely talented community organizer; she has wonderful managerial skills and can be a leader without pushing people around. They are very much committed to humanity, really, to the city, to the people who live in the city, to the people who are not as privileged as others are; I think that is bedrock for both of them.”

After two decades, with development nearing completion, “it’s pretty much bang on,” Wilkey says, enumerating community priorities like parkland, affordable housing, mixed-use residential, beautiful design, sustainability, and walkability — all of which have been embraced in the final conception of projects like Corktown Common, the redesigned Queens Quay and the Pan Am Athlete’s Village area. “Those of us who’ve been at it from the very beginning couldn’t be happier,” she says. “It meets and exceeds our vision.”

Like Jane Jacobs, Beddoes finds that “everyday people are often far ahead of the politicians in their ideas about transit, urban design, and everything else; you get these big grassroots campaigns that seem to take City Hall by surprise.” For Wilkey, the key is multiple voices exploring big ideas. “My work and the work that Julie and all of us have been doing show how far you can go if the City actually puts its mind to comprehensive planning and brings everybody into the picture to build a vision,” says Wilkey. “It’s extremely powerful and it’s very satisfying.”

Profile by Sarah B. Hood; photo by Matthew Blackett