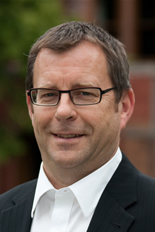 Building communities takes imagination, determination and a willingness to take risks; all the while dealing with competing visions, countless nay-sayers and numerous tempting opportunities to delay or change direction. No one knows this better than Derek Ballantyne, this year’s recipient of the Jane Jacobs prize. He’s been described as a community consultant who gets things done without having a bulldozer mentality. He knows how to create work environments to support his vision. And as a long-time volunteer he understands the importance of buy-in. “The lessons I have learned from the community sector have been very valuable and are translatable into a large organizational context.”

A compelling vision is often simple and it was Derek’s genius to confront the fact that in 2002 the Toronto Community Housing Corporation (TCHC) was a community in name only. How could a newly amalgamated collection of public housing companies with over 58,000 units and an overall population greater than Prince Edward Island become an innovative and transformative institution? And do so when most people said it could not be done!

In retrospect, he says, he drew heavily on his early housing experience with a small inner city housing nonprofit in Ottawa, Centretown Citizens’ Ottawa Corporation (CCOC). He had originally joined the organization as a volunteer and by the mid-80s was chair of its board. CCOC was founded by activists in the 70’s and has remained dedicated to its goal of building community both within and around its 1,300 units in downtown Ottawa. Here Derek learned that companies could be communities, that communities had to be built from the bottom up, and that the business culture had to be values-based.

By 1989 community building had become his passion and he moved from the federal civil service into community nonprofit housing as a full-time endeavor. As general manager of City Living, Ottawa’s municipal housing corporation, he began to implement his ideas on a larger scale as well as incorporating organizational transformation and a political environment into his way of working.

It proved to be another step towards the challenges he would face when he moved to Toronto in 1999 to become the CEO of Toronto Housing Company which subsequently merged with the Metro Toronto Housing Corporation to become TCHC, one of the largest landlords in North America. With a population of 160,000 residents, Derek knew that he had to do more than just collect rents and fix broken window panes.

A dramatic institutional shift had to take place – in the way people within the organization worked; in the way decisions were made; and in the way residents felt about the communities they lived in. The solutions weren’t easily apparent – how to engage workers and residents in the idea of a ‘new’ organization. A lot of anger, a rigid bureaucracy and a long history of unfulfilled promises had been inherited from the earlier organizations.

But, just as important, (but of less interest to the media) there was a tremendous reservoir of committed, community-minded residents and staff who could be the building blocks of a different culture. Ultimately the answer was not to create one organization but to reorganize the company into numerous neighbourhood-based Community Housing Units, each operating within the financial and value system of the whole company but encouraged to interact and innovate within its own neighbourhood.

By listening closely to frontline staff and making tenants active participants in the change, things slowly started to turn around. The outlines of a different company began to emerge. What Derek and his team learned was that tenants wanted to have a voice, and wanted to have a say in how to make their community a safer and better place to live. Today, there is certainly no shortage of suggestions from the tenant body who now participate in elections that are larger in size than many of Canada’s smaller cities. Since 2002 tenants have also sat on advisory tenant councils which address local issues, allocate resources and develop local business plans.

And Derek adds, “After a couple of years when TCHC became known as a better place to work, we began to attract bright and dedicated people who had worked in the community-based sector where I started as a volunteer. They had skills and fresh ideas which a large organization can support with resources. It was ‘win-win all round.”

Derek also looked at how to overhaul the financial picture: “It was pretty clear, until quite recently, that the senior levels of government were not going to provide the funding we needed to repair our units. Unless we could leverage some cash flow from the housing assets, we were not going to be able to improve the living conditions in our communities. We realized that with the size of TCHC, we were a market unto ourselves and could compete both internally and externally. We went through a long and complicated rating process – a first for a social housing organization in Canada. And ultimately, based on the quality of our assets and cash flow, we were able to borrow at very competitive rates over $250 million dollars. It still wasn’t enough but it allowed us to start the rebuilding and repair programs in earnest.”

Derek and his team came up with the idea of setting up their own service providers. For example, they created Housing Services Inc., a construction and management company wholly owned by TCHC which bids on contracts both within and outside the portfolio. TCHC also helped create a laundry service with private sector investors that not only provided better service but generated additional revenue to upgrade existing services. Revenue was also generated through rooftop antennas and rooftop advertising.

All this meant an ability to make new investments. It meant more money for improving and repairing crumbling housing much faster. And as importantly, as part of creating stronger communities, it meant that TCHC could invest in people through a Social Investment Fund – for example, funding a youth centre in Pelham Place and starting community gardening programs.

For the last six years, Derek has been overseeing the redevelopment and transformation of one of Toronto’s largest urban neighbourhoods – Regent Park. One would think that the Regent Park renewal would stand out as his most important project. While Derek doesn’t deny its importance, he wants to see it in the right context. While the Regent Park revitalization has been given a lot of press, in the end, it will affect approximately 7,500 people. But there are another 150,000 residents living in TCHC properties. He insists, “We’ll never be able to do a Regent Park in every neighbourhood. But we can do other things that will affect many more lives.”

Derek would be the first to admit that he didn’t do all this alone. When asked about leadership, he points to three important characteristics. First, he or she should allow for risks to take place and support a risk-taking environment. Next, a leader builds both the internal and external confidence of the organization. He or she builds the space to allow for creativity. Finally, “you have to order your ideas. You can’t do everything at once and you have to make strong priorities and stick to them.”

When asked about his proudest moment, Derek talks about how tenants have become more involved, how they feel they have more say in how they live, how they feel confident to be their own change. In the end, there’s no better compliment than when tenants tell him, “My place is a better place to live.”

On May 15, 2009, Derek started his new position as the Chief Operating Officer of Build Toronto, a City of Toronto organization that will engage private and public sector partners in the development of city real estate. If his past successes are anything to go by, we can look forward to some exciting new developments in Toronto’s urban fabric.